Looking Back at 2021 USA Amateur Boxing
Written by: ThePrizefighters.com Staff 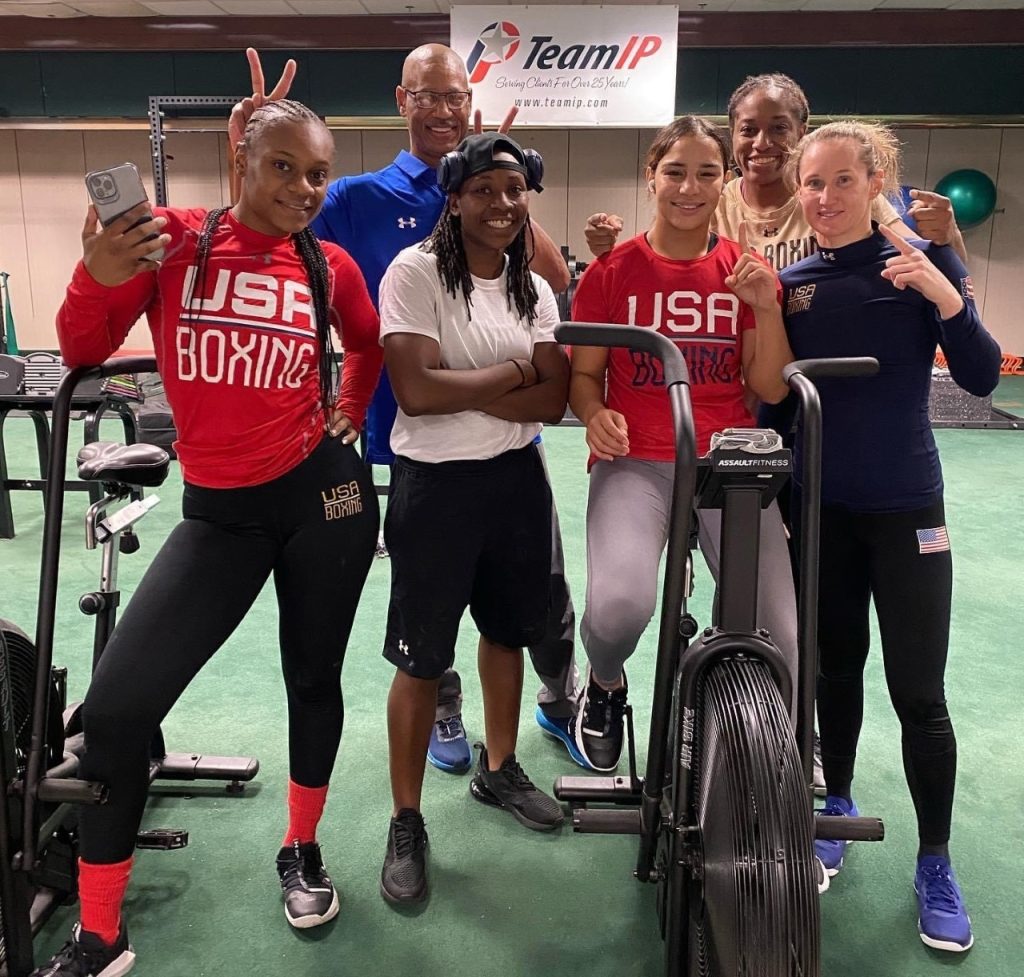 A Review of USA Amateur Boxing in 2021

As the world opened up after the Covid-19 lockdown, so did boxing.

Here’s a rundown of the amateur boxing world in 2021.

In the summer of 2021, with qualifiers being cancelled and the coronavirus still in wrecking mode, it was an incredibly windy road to get to the actual Olympics. USA Boxing sent their 10-member team, to represent the United States in the Tokyo 2020 Olympic Games at Kokugikan Arena.

The 10th and last member to be added to Team USA’s roster was Las Vegas featherweight Yarisel Ramirez. The 2019 World bronze medalist lost her opening match by unanimous decision to Nikolina Cacic, Croatia’s first woman boxer to win a fight at any Games.

Rashida Ellis, USA’s lightweight from Lynn, Massachusetts fought a fast and sharp first fight with Great Britain’s Caroline Dubois. In an even fight going into the third round, the judges went with World Youth Champion Dubois 29-27 over Ellis.

Cleveland, Ohio’s own Oshae Jones won her first bout by split-decision over Mexico’s Brianda Cruz. In the quarterfinals, the welterweight beat the Dominican Republic’s Maria Moronta by unanimous decision, clinching a bronze medal. However, Jones who comes from a family of fighters, lost by split-decision to China’s two-time World silver medalist Gu Hong in the semi-finals. Jones was USA’s only female to medal in Japan, finishing 2-1.

Staff Sergeant Naomi Graham from Fayetteville, North Carolina made history as the first active female military member to represent USA Boxing in any Olympic Games. While many expected the Team Captain and number three seed to advance further than she did, the middleweight who brought home gold from the 2019 Pan American Games, took a loss to Russia’s Zemfira Magomedalieva by points.

It was beautiful to see the Olympians receive Keys to the City, parades and love from their respective hometowns upon arriving from Tokyo’s 2020 Olympics.

In July 2021, 13 Team USA boxers competed in a qualifying event in Guadalajara Mexico to participate in the first ever 2021 Junior Pan American Games in Cali, Colombia.

Kayla Gomez, 112 pounder by way of El Paso, Texas dominated at the Games. The featherweight had a 4-1 decision over Argentina’s Mara Fabian in her first bout, followed by a unanimous decision win in the semis against Columbia’s Flor Rodriguez. In the finals, Gomez gave Mexico’s Margarita Rodriguez two standing eight counts, resulting in another unanimous decision and the gold medal victory.

In another dominating performance by Team USA, 125 pounder Jewry Rodriguez, fought and won all three of her fights by unanimous decision. In her first bout, all five judges scored it Rodriguez’s way over Colombia’s Maria Henao. She took out Argentina’s Sol Medina in the semifinals and Mexico’s Rosa Azuara in the finals, to bring gold back home to Houston, Texas.

Jesikah Guerra, 152 pounder out of Victorville, California took her first win 5-0 over Dominican Republic’s Jilary Del Orbe and 4-1 in the semifinals over Colombia’s Roxana Flores. Continuing her control inside the ring, Guerra secured USA Boxing’s final gold medal of the Games with a 3-2 decision over Mexico’s Maria Franco.

California was one of the last states to open up due to Covid-19’s shutdown. But when the state did open up, Beautiful Brawlers’ founder Blanca Gutierrez was ready to bring her 10th Annual All Female Amateur Fight Series back to BabyFace Boxing in her hometown of Pacifica, CA. With the 10th anniversary show being postponed due to the 2020 pandemic and the event date finally set for October 30-31, the interest was sublime. 128 boxers registered in hopes to be matched for what turned into a two-day historical tournament on Halloween weekend.

By showtime, there were 17 number one ranked boxers, 5 members of Team USA, a team from Mexico, as well as boxers from Las Vegas, Idaho, Montana, Colorado, Washington, Chicago, Texas, Florida, Wisconsin and Hawaii.

From pee wees to elites, the bouts were evenly matched which led to some very explosive exchanges and exciting fights:

In the intermediate 13-14 year old 115 pounds championship match, Fresno, California’s 2019 Champion, Thalia Tomayo took the win in a toe to toe action bout over the number one ranked Johaunna Martinez from Billings, Montana.

There was a four-way eliminator in the 15-16 year old 135-140 pound junior bracket. Formerly ranked Casiphia Arnold of Oregon, took a loss to Texas’ current number one Gabriella Tellez. 2019 Champion and USA’s number three Lizbeth Oceguera took a loss to fellow Californian and mixed martial artist Jennah Creason. When Tellez and Creason took their battle to the championship round on Sunday, the contenders exploded at the first bell. Being one of the best fights of the weekend, Creason walked away with the championship belt and one of two Best Boxers of the Tournament.

Northern California’s I’Jayla Smith had two fights in her elite 132lb bracket. On Saturday, she stopped Central California’s Mariah Carrasco in the first round. On Sunday, Smith came out the victor when she beat 2019 Champion Tanisha Lopez, also from the San Francisco Bay Area.

In her elite debut, Team USA’s Jesikah Guerra had flashy and close bouts in the 154 pound bracket. In a fight that could have went either way, Guerra took the win over the Bay Area’s 2019 Champion Ana Mendoza, but lost the decision in the finals to 2020 Olympic Qualifier contender Kendra Samargis of Idaho.

In the 13/14 year old Intermediate bracket, Wisconsin’s number one at 119 pounds, Yazmin Rosales (w) vs Florida’s number five Yesalee Alvarez; 100 pounders, Southern California’s Alyssa Samorano (w) vs NorCal’s Nyzjai Goodrich. And in the 101-106 pound bracket, the semifinal match between Oregon’s Malaya Wohosky (w) vs Wyoming’s Emily Garrison and a great fight in the championship round against Idaho’s Emma Warden. In the non-open bracket and making her Brawlers debut, Salinas Boxing’s Liliana Santiago earned her championship belt with three eight counts and a stoppage.

These matches were just a few of the exciting battles being fought at Beautiful Brawlers 10. These names are purposely being mentioned because these are the boxers that people may not know, but they are the ones to look out for.

World Champion Franchon Crews-Dezurn sponsored the Best Boxer awards for the second consecutive year and former champions Martha Salazar and Mighty Melissa McMorrow continued their generous sponsorships. Both Salazar, who Gutierrez has stated that “there is no Beautiful Brawlers without Martha” and McMorrow have been immortalized on past belts. This year, first time sponsor and East Los Angeles’ World Champion Seniesa Estrada’s logo is adorned on all 35ish 2021 championship belts.

Sue Fox, founder of Women’s Boxing Archive Network and the International Women’s Hall of Fame also graced her presence at the event. She was ringside interviewing boxers and documenting this historical all female, amateur tournament.

Speaking with founder and matchmaker Coach Blanca Gutierrez, she had this to say: “Beautiful Brawlers 10th Anniversary Tournament was the best show we have ever had. The talent there was abundant and every division was represented. The only
one missing was eight-time Beautiful Brawlers Champion and 2020 Olympic Trials National Champion Lupe Gutierrez who is always at our shows. This year she was in bootcamp. She is in the World Class Athlete Program (WCAP) and will now be representing the United States Army. She was very much missed.”

For the second consecutive year, USA Nationals were held in Shreveport, LA December 5-11. With Covid-19 leaving many of the nationally ranked boxers opting out of the 2020 tournament, the athletes came back full force in 2021 taking their wins and rankings back from the previous year’s champions.

An emotional Paige Gilbert of Wyoming won her fifth National title in the 119-pound youth bracket with an exciting battle over Texas’ Quermauri “Summer” Polk, her first time competing at a National event.

125-pounders, Texas’ Yoseline Perez took it all and then some when the 11x National Champion beat the number one youth ranked, 2021 WBC Amateur Champion, Chantelle Navarro by unanimous decision in the finals.

Winning their semifinals by unanimous decision, it was Laredo versus El Paso with Jennifer Lozano and Kayla Gomez, making her elite debut in the 114-pound bracket. In a fight that could have gone either way, judges went with the older Lozano by split decision.

2020 National Champion Amy Minter lost by unanimous decision to 4x National Champ Alyssa Mendoza, who then took a loss to veteran Amelia Moore. Also making her elite debut in the stacked 125-pound division, Jewry Rodriguez fought and won twice to make it to the championship round. There she went mano a mano with seasoned elite Amelia Moore, another match that could have gone either way. The veteran Moore walked away with a split decision and the National title.

In another hot bracket, the elite 132s had some exciting fights! Elite debuter from Hayward, California, Daisy Bamberger beat Texas’ Monserrat Carmona by unanimous decision. In the semifinals Bamberger just fell short when she met Olympian Rashida Ellis in the Ring. In the finals, Rashida continued her winning streak when she beat another elite debuter and member of Team USA, Faith Mendez by unanimous decision.

Other matches definitely worth mentioning:

After three years out of the ring, Californian and Youth Gold medalist Jajaira Gonzalez returned to Nationals with a vengeance in the 139-pound bracket. She fought twice to meet New Mexico’s number three Sharahya Moreu, who fought three times to get to the championship round. In the finals, it was Gonzalez who went home with the USA National title, beating Moreu by unanimous decision.

In the 146-pound division, active-duty Marine First Lieutenant Stephanie Simon was probably the biggest upset at Nationals. Simon fights out of II Marine Expeditionary Force (MEF) MACE (Martial Arts Center of Excellence) Boxing Team, Camp Lejeune, North Carolina. She took out the number 1 youth making her elite Nationals debut, Arianna Carrasco of New Mexico by first round stoppage. In the finals, Simon stopped the number six Arika Skoog in the third round for the National title. Skoog beat Hailey Pennington by unanimous decision in the semifinals.

Elite Bouts We Want to See at 2022 USA Nationals: