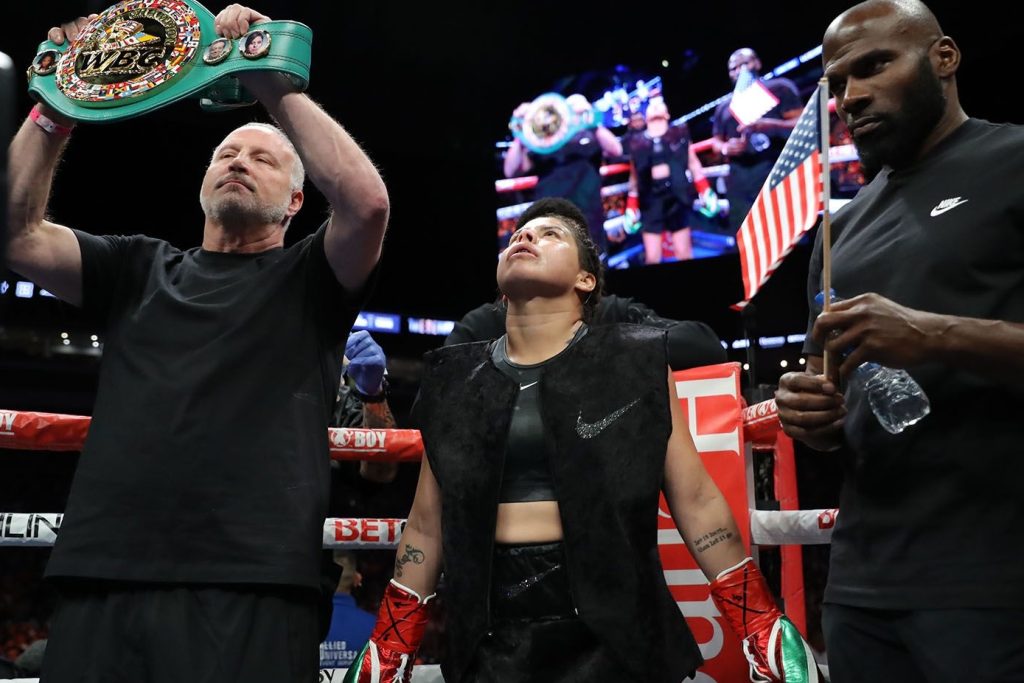 Home Cooking for Marlen Esparza in Her Win in Texas

Home cooking helped Marlen Esparza walk away with three world title belts including the Ring Magazine title over Japan’s five-division world titlist Naoko Fujioka, but the fight was close until the final bell on Saturday.

Houston’s Esparza (12-1, 1 Kos) showed the Texas crowd that she could out-battle Japan’s Fujioka (19-3-1, 7 Kos) and do it while fighting in the pocket at the Alamodome in San Antonio, Texas. But two judges had their eyes closed and simply gave every round to Esparza.

It was much closer than that.

The US Olympian was expected to keep the fight at a distance as was her method during her amateur star days. But as a professional Esparza has changed her method of attack and just needed time to adjust to the experienced Fujioka. Adjustments were made.

“It was different because she is such an experienced fighter,” said Esparza. “I had to pick the right way to fight.”

Esparza immediately attacked with a blow and missed. Fujioka slipped under another right and landed her own. That seemed to confuse Esparza in the first round.

Back to using the jab and quick combinations Esparza regained momentum as Fujioka needed a couple of rounds to make adjustments too. Esparza’s movement made the Japanese fighter pause and figure out a new method of attack.

Fujioka walked into the prize ring with experience in winning world titles in five different weight divisions. After three rounds the Japanese fighter began pounding the body and head despite Esparza’s counters. It began to force the Texas fighter to stand and fight.

For the remaining part of the fight both stayed within punching distance and pounded away. It was professional boxing as it should be. Too bad it was only two-minute rounds.

Every time Esparza connected with a big overhand right, Fujioka would counter with her own overhand right and left hook chaser. It was good stuff and kept the crowd involved. Every round was tough and nobody could gain separation.

After eight rounds it appeared to be a dead heat between the two champions. With only two rounds remaining it was going to come down to either knockdown or a convincing blow.

Esparza and Fujioka both opened up with everything they could muster. The body shots, left hooks and right counters connected for both, but the separating factor seemed to be Esparza’s ability to slip some of Fujioka’s attacks. In the last two rounds it was very difficult to surmise who would the rounds in two-minutes. After 10 rounds the fight went to a decision.

Two judges from Texas picked Esparza the winner by ridiculous scores of 100-90, 100-90. Only the judge from Nevada had it a more accurate 97-93 for Esparza.

Despite the two outrageous scores, the Olympian from Houston did manage to show her pedigree and ability to absorb big shots and return the favor. Now she holds three belts as proof she is the flyweight world champion.

“It was amazing,” said Esparza.