Mikaela Mayer Wins and Fellow Olympians Win Too
Written by: David A. Avila 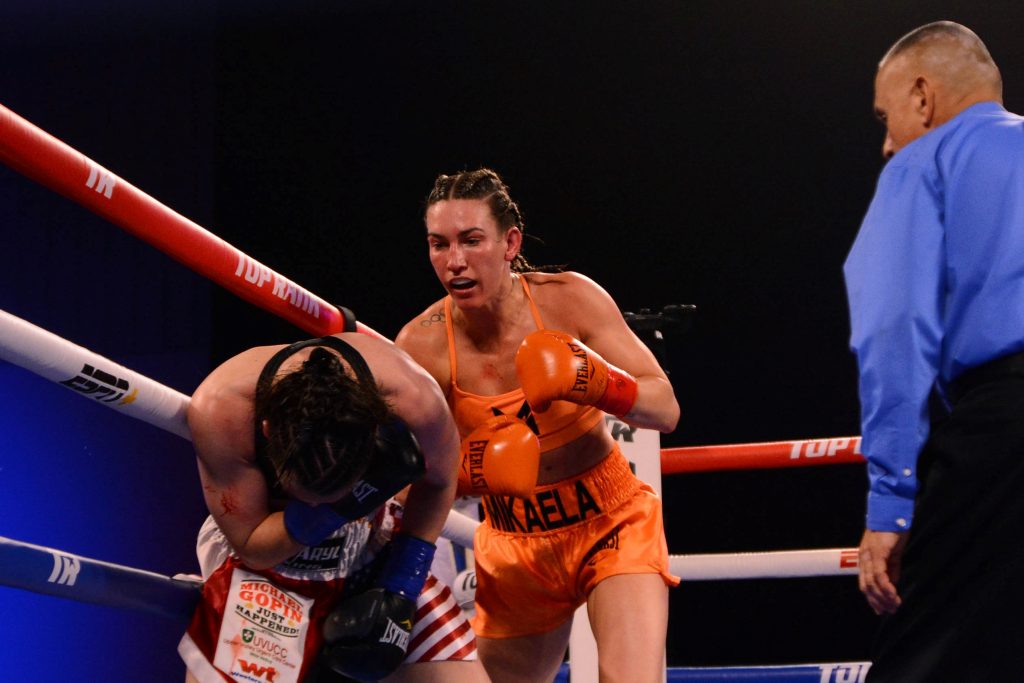 Three American Olympians led by Mikaela Mayer showcased their brand of prizefighting and all were televised or streamed.

This past Saturday, in her native Southern California, Mayer trounced another American Jessica Han who was honed in the USA amateur world too. Both engaged in a skilled and fierce fight seldom seen before the 2010s. Now we are seeing it more and more and not just in America.

After three Olympic Games women now have the torch to guide them as a beacon to the professional fight world. This past weekend we saw Olympians Marlen Esparza, Ginny Fuchs and Mayer all perform on various media outlets.

The world was watching.

Mayer has evolved from a boxer reared in the international amateur world dependent on using her arm length and height advantage. As a professional Mayer has graduated to a polished fully equipped prizefighter able to fight inside, toe-to-toe or via Malcom X’s mantra by any means necessary.

Against Han, the fierce blond super featherweight world champion Mayer bludgeoned and pounded the former featherweight champion for all 10 rounds. Though it was clear that a decision was most likely in her favor, Mayer gunned toward a knockout win at Bob Hayes speed.

“I wanted to get the stoppage. I feel like I hurt her in the eighth round, almost finished her,” said Mayer. “This is another reason why I’m advocating for three-minute rounds.”

The big question is why wasn’t this fight held in three-minute rounds?

Don’t blame it on the California State Boxing Commission.

In San Antonio, Texas, another Olympian Marlen Esparza clashed with Japan’s five-division world titlist Naoko Fujioka for the WBA and WBC world titles. Esparza and Fujioka fought in close for 10 rounds in a riveting struggle that was difficult to judge in mere two-minute rounds.

Esparza won by unanimous decision that was more noted for its horrible judging by two Texas judges Wilfredo Esperon and Jesse Reyes. Both gave Esparza every round on their scorecards. No neutral observer agreed with those two scores. Not that Esparza was unfairly given the win, but to claim that the Japanese champion did not win a single round was clearly an indicator that Esperon and Reyes should never judge a world title fight again.

Before going into the fight Fujioka’s team had concerns about Texas judging. They had preferred California or Nevada judging. Originally this fight was slated for Los Angeles, but a change of plans by the promoter Golden Boy Promotions switched the fight to Texas.

The Japanese team’s concerns proved justified by the two Texas judges who seemingly just turned in pre-determined scorecards like those 1988 Olympic judges in South Korea.

Most credible world title fights have neutral judges. In this case if there is one Texas judge than a Japanese judge should have been allowed and maybe a third from Europe or Africa.

One judge, Lisa Giampa of Nevada, turned in a fight card that seemed to accurately score the world title fight between two world champions. It was fair and seemingly on par with other neutral observers.

I feel blame must go to the sanctioning organizations for picking Texas judges.

2020 US Olympian Ginny Fuchs made her pro debut splash with a knockout win over Randee Lynn Morales on the Top Rank fight card at Costa Mesa, California. It was significant because the Texas flyweight was the last boxer to defeat Marlen Esparza in the amateurs.

Fuchs beat Esparza in the US Nationals Finals on December 2016. It was her second consecutive win against Esparza who won bronze in the 2012 London Olympics. Fuchs then went on to represent Team USA but did not make Olympic qualifying in 2016. But she did make the USA Olympic team in 2020.

The impressive win by Fuchs this past weekend means she could be fast-forwarded to a showdown between the two Houston, Texans. Fuchs is already 34 years old and Esparza is 32. A fight between the two should happen within a year or two.

America’s Baumgardner last entered the boxing ring when she shocked the British fandom with a fourth round stoppage of Terri Harper back in November. Now she returns and faces Argentina’s Matthysse a former featherweight world champion who defeated Jelena Merdjenovich in 2015 and then lost in the rematch.

Baumgardner trains in Detroit and was recently seen in San Diego, California where she was invited to the Matchroom Boxing card that featured Roman “Chocolatito” Gonzalez. The model/fighter accompanied lightweight Devin Haney and his father during the fights. She also talked a little about her plans including this first defense of the WBC title.

“I have to take this mandatory and then I am going to fight (Hyun Mi) Choi later this year,” said Baumgardner at the Pechanga Arena earlier this year. Choi holds the WBA version of the super featherweight title.

Of course, Mikaela Mayer wants either of the titlists. The blonde prizefighter feels she is being freezed out. She does have another option in fighting the winner between Katie Taylor and Amanda Serrano who meet at the end of this month at Madison Square Garden in New York City.

“I’m game to go up and challenge the winner of {Amanda} Serrano versus Katie Taylor,” said Mayer who fights at 130-pounds but could easily move up to 135 pounds.

Denise Stanojev (4-0) won by knockout over Ruza Zakic (0-1) in the second round. The super featherweight bout was held in Vienna.

Emma Gongora (3-2) won by decision after 10 rounds versus Elsa Hemat (4-6-2) on Wednesday April 6. The French lightweight title fight was held at Marseille.

Dilar Kisikyol (6-0) won by decision over Anna-Lena Weusmann (0-1) on Saturday April 9. The super lightweight bout was held in Brandenburg.

Jade Taylor (5-0) won by decision after 10 rounds versus Linzi Buczynskyj (2-1) on Saturday April 9. The super featherweight fight was held in Lanchashire.

Jordan Baker (3-1) defeated Klaudia Vigh (3-36-1) by decision after six rounds on Friday April 8. The lightweight match was held at Tyne and Wear, England.