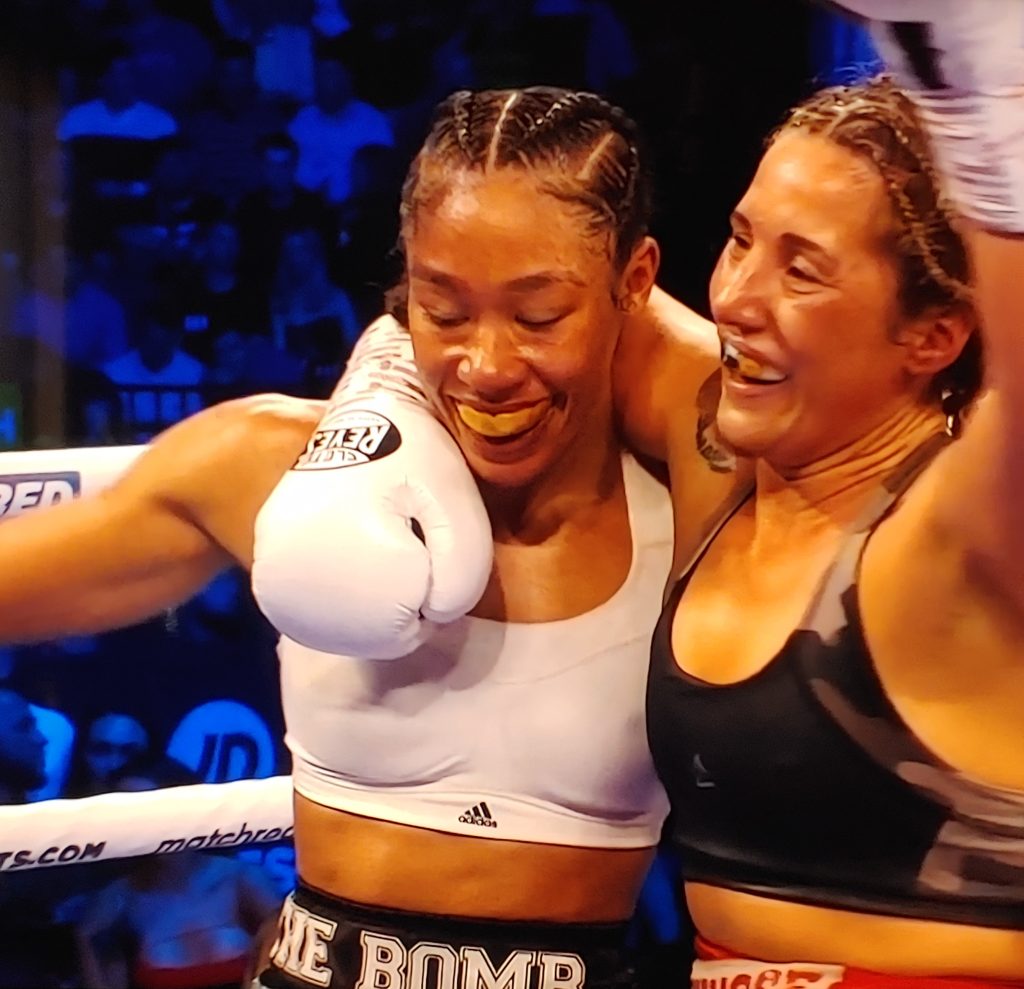 As if proving it was not mirage Alycia Baumgardner mesmerized British fans and challenger Edith Matthysse to win by unanimous decision in her first defense of the super featherweight world titles on Saturday.

England, you have been awakened.

WBC and IBO world titlist Baumgardner (12-1, 7 Kos) was unable to get the knockout but cruised past Matthysse (17-12-1) with her blend of power boxing at Manchester Arena in Manchester, England.

“The Bomb” had surprised an entire country when she knocked out former champion Terri Harper last November. Most of the British nation expected to see Harper emerge the victor that not but saw Baumgardner shockingly win by knockout.

A world awaited anxiously to see Baumgardner show her overall boxing abilities that escaped their attention in her first foray in England. This time they paid attention.

She worked diligently behind a jab that she mixed behind touches and power. And when Matthysse got brave the Detroit fighter fired overhand rights that reminded the Argentine fighter the danger of moving in too quickly.

Matthysse waited two rounds before trying to pressure the world champion and firing combinations. Baumgardner maneuvered left and right never offering the Argentine fighter a predictable look. And when least expected Baumgardner fired right uppercuts or overhand rights that shook Matthysse. But it was the Argentine’s best effort so far, it just wasn’t enough.

By the fourth round Alycia seemed to be in a comfort zone and able to dictate whatever she wanted to do. When Matthysse barged in with two blows Baumgardner retaliated with two left hooks, and a lead right. Matthysse countered with two of her own blows and Baumgardner answered back with three powerful rights in rapid fashion.

Not until the seventh round did Matthysse decide to sacrifice walking through the American’s punches. Baumgardner opened up with a five-punch combination so Matthysse countered with a one-two and then a double left hook. Both fired shots and both countered. It was the Argentine fighter’s busiest round. But still not enough to win.

Despite Baumgardner’s dominance, she seldom attacked the body. Occasionally a blow or two found Matthysse’s body but the champion preferred pot shotting the head and moving out of danger.

Action slowed in the eighth and ninth rounds but in the 10th and final frame Alycia opened up aggressively with right hands. A Baumgardner four-punch combination ignited a three-punch salvo from Matthysse. Then the Argentine fighter connected with a right to the body and was met with a left to the body from Baumgardner. The American fighter finished off the round with a five-punch combination.

Both women hugged after the fight. All three judges scored the fight 100-90 for Baumgardner.

The win by Baumgardner hopefully sets up the expected showdown with WBA titlist Hyun Mi Choi later this year. And possibly the winner meets IBF and WBO titlist Mikaela Mayer later this year.

Baumgardner’s performance gave British fans a chance to understand what makes her the new WBC and IBO titlist. American fans too got a glimpse at one of their own.