The Fantastic Fight Between Katie Taylor and Amanda Serrano and More
Written by: David A. Avila 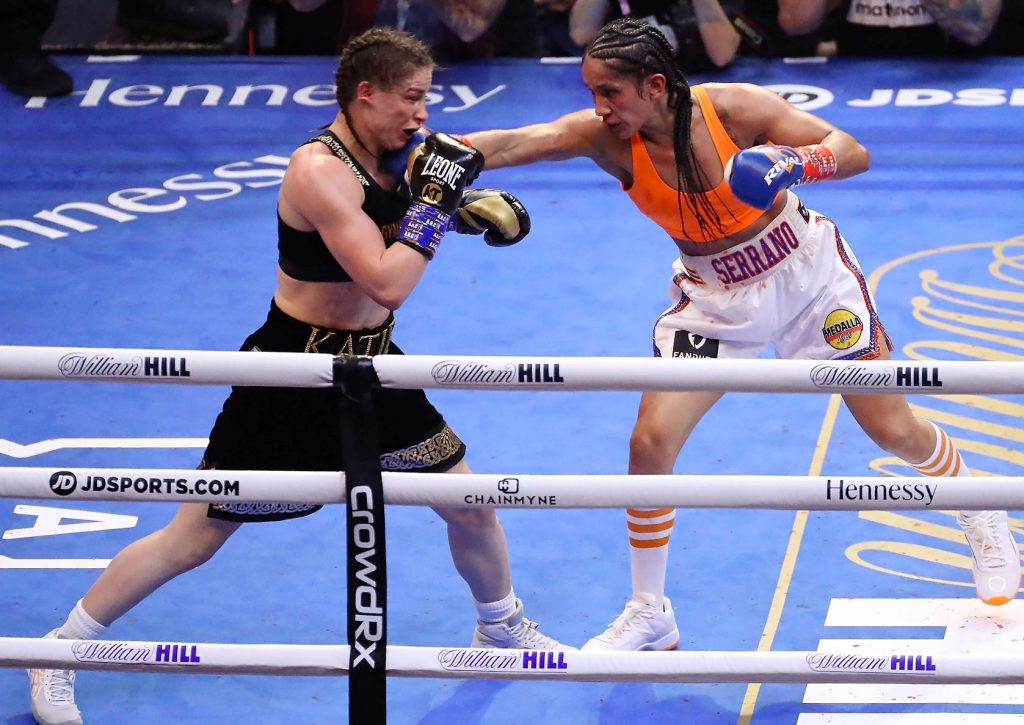 Waiting at the JFK Airport for my return flight to Southern California on Sunday afternoon, a little Latino boy possibly nine or ten years old stood shadow boxing near a pillar watching his own reflection. It was a reminder of the night before at Madison Square Garden.

It was the greatest night of boxing I had ever witnessed.

“I think just walking out and looking at a packed stadium was unbelievable,” said Taylor after the fight. “Tonight, was absolutely the best moment in my career.”

“It was just a crazy feeling,” Serrano said. “Two women getting a sell-out at Madison Square Garden. Who would have thought that?”

For decades naysayers claimed nobody likes women’s boxing, a few promoters are members of that group.

When Serrano and Taylor entered the arena, their appearance stirred a roar from their respective fans that consisted of many Irish and Puerto Ricans near and far. Both fighters froze upon hearing the roar. For me it choked me up a bit realizing my dream of witnessing a mega fight between female prizefighters had arrived.

The electric moment of roaring cheers, music, explosion of smoke held every one of the 19,187 fans spellbound.

Suddenly my thoughts raced back to a moment in the 90s when I first saw two female prizefighters Wendy Rodriguez and Tracey Stevens perform with a sonic boom intensity inside a tent at Pechanga Casino. These two tiny women scrapping it out as if their lives depended on it.

I had seen Christy Martin fight on television and had already met Mia St. John and Brigette “Baby Doll” Riley but had never seen them fight live. Watching on television is much different than seeing it ringside. From that moment on I promised myself to always give women their props and to try and see their fights live.

For decades women came from all over the world to places like Las Vegas, Los Angeles and New York seeking guidance and coaching from boxing experts. Many like Elena Reid, Vaia Zaganas and Melinda Cooper gave up families, comfort and material goods just so they could receive training. Their rewards were often at most $1,500 or less for world title fights.

Once, I saw a WBO bantamweight champion named Kaliesha West defend her title and not receive a single penny for her 10 rounds of war against a future world champion Ava Knight who was paid. The reason West was not paid was the WBO sanctioning fee demanded their money. They did not care if West got nothing.

Women’s boxing always was shoved aside by people who always claimed no one likes it. Last Saturday in New York City thousands showed up to witness the battle between two of the top female fighters in the sport. After the 10 two-minute round fight, no fan departed feeling shortchanged.

The next day other female fighters like Mikaela Mayer, Ginny Fuchs and Seniesa Estrada were still buzzing from the atmosphere they had witnessed. Claressa Shields, Jelena Mrdjenovich, Jessica McCaskill, Alycia Baumgardner and Terri Harper were among those witnessing the almost ethereal sensation of a packed Madison Square Garden.

It’s where Muhammad Ali and Joe Frazier traded blows the first time 51 years ago. It’s also where Felix Trinidad and Bernard Hopkins fought just weeks after the 9-11 catastrophe decimated the World Trade Center. I was there for the Tito fight and remembered watching on television Ali and Frazier.

Serrano vs Taylor and Crews-Dezurn vs Cederroos equals all the previous magical moments in boxing that I’ve witnessed over the decades.

One major drawback for me and a few others was that Serrano-Taylor’s fight was in the two-minute format. It was a common complaint that many fans and fighters mentioned after watching the two battle it out at Madison Square Garden.

During the post-fight press conference promoter Jake Paul mentioned that Eddie Hearn agreed about the fight needed the three-minute round format. But when Hearn spoke to the press he denied it. He claimed the fast format created more action.

If that’s true, why not make all your male fights two-minute rounds?

Not to rain on Taylor’s parade, but it seems she prefers the two-minute stanzas so Hearn backs her. But three-minute rounds allow judges more time to determine who wins a round. It’s much harder with only two-minutes. I’ve talked to many judges about this, and off-the-record, they all dislike two-minute rounds.

Hearn did admit that under three-minute rounds there would be more knockouts. That’s definitely the point: Fans prefer knockouts over judgements.

If you are a promoter, then demand three-minute rounds. No commission would prevent you from doing so, but promoters often claim that. And do not claim that television networks prefer two-minute rounds. That’s another misconception. Networks are paying promoters to give entertainment value. Period. Knockouts are always preferred over decisions.

Battle of the promotions

After the Taylor-Serrano fight the two champions were still basking in the glow of performing in front of the sold-out crowd when they approached the media an hour later.

Questions of a rematch seemed misguided but not when considering the crowd appeal.

“I’m super honored to share the ring with Katie,” Serrano replied. “We made history and made the best purse in history for women…I just wanted to put on a great fight.”

After Serrano concluded, Taylor walked in later and was asked if a rematch were plausible?

“What an amazing fighter Amanda is,” said Taylor with a smile. “This was a career-defining moment in my career. I did what I had to do.”

Taylor’s promoter Eddie Hearn didn’t want to seem too eager but could not mask his desire to see the two perform again.

“It’s always been on our minds to get to Dublin,” said Hearn of staging a Taylor fight in her native Ireland.

But Taylor was open to a return to Madison Square Garden.

“At the weigh-ins all the Puerto Rican fans, Irish fans there, it was unbelievable. I never experienced anything like that. The atmosphere was amazing.”

Taylor said as soon as she walked into the arena it conjured up visions of Muhammad Ali and Joe Frazier and now she and Serrano belong there too as one of the great fights.

“People will hopefully be talking about our fight,” Taylor said. “Tonight, was very good for both me and Amanda.”

“Being able to inspire young girls and the next generation,” Taylor said is a personal goal she shares with Serrano.

“I want to continue to open doors for girls,” Serrano said.

Both promoters are confident in the future of women’s prizefighting.

Hearn was glowing about both the performance and the crowd.

“It’s one of the best fights I ever witnessed. Tonight, was truly fantastic,” Hearn said.