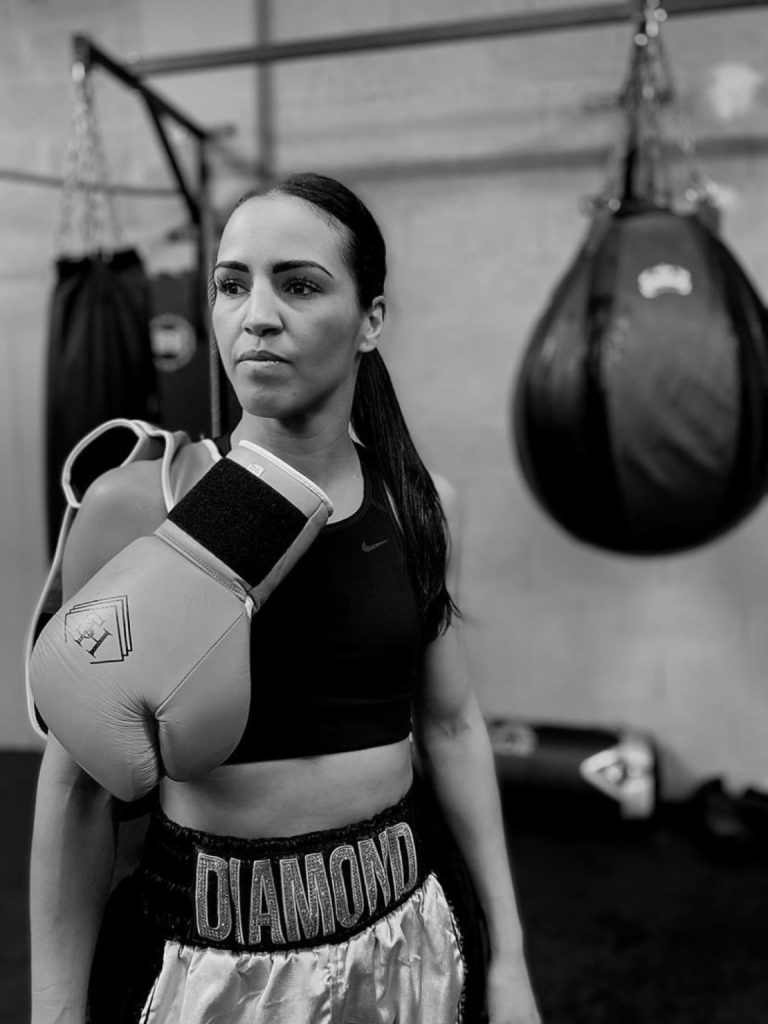 It could be called the battle of the French Foreign Legion when Belgium’s Delfine Persoon (46-3) and France’s Elhem Mekhaled (15-0) meet 10 rounds on Saturday May 14, for a regional title at Dubai. It will be streamed via pay-per-view on www.globaltitans.com at 10:30 a.m. PT/1:30 p.m. ET.

If you follow women’s boxing then Persoon’s name has that extra oomph because of her nonstop junkyard dog attacking style. She does not quit once the bell rings. Any doubts? Just look at her two fights with Katie Taylor.

Mekhaled, 31, grabbed a few titles over the past few years but has never fought anyone close to Persoon’s talent. She allegedly retired after a recent proposal for her to fight Alycia Baumgardner as a late replacement. The reason: she was insulted by the proposal with less than a month to prepare.

But you know the old boxing adage: be ready so you don’t have to get ready.

Baumgardner was a replacement and she was willing to fight Terri Harper and we know what happened. All boxers should be ready to fight at any time. No one needs three months preparation.

I can imagine the ghosts of fighters from the 30s and 40s laughing at fighters who demand no less than eight weeks preparation. Those old-timers like Henry Armstrong, Jack Britton, and Baby Arizmendi fought almost every other week. They were always in shape and they had to weigh-in the day of the fight.

Persoon and Mekhaled are battling for a minor title around 9:30 p.m. Dubai Time.

On Thursday May 12, a super featherweight clash between Chelsea Anderson (4-0) and Jessica Juarez (3-1) takes place at the Quiet Cannon Country Club in Montebello, Calif. UFC Fight Pass will be streaming the 360 Promotions fight card live.

Anderson, 31, is a tall, lean, power-punching fighter from Orange County who shocked fans with her skill set despite only having a few fights. She defeated a very good fighter in Elvina White last September 2021. One of her advisors is Erin Toughill a veteran of both boxing and MMA.

Juarez, 22, fights out of San Diego and lost her last bout against Australia’s talented Skye Nicolson. This time she fights someone with pop who stands right in front but presents a different kind of challenge.

It should be an interesting fight.

The promoter is Tom Loeffler who has long been a supporter and believer in women’s boxing. He advises Cecilia Braekhus and formerly worked with Christina Hammer.

Speaking of men who believe in women’s boxing, a number of male stars attended the Katie Taylor versus Amanda Serrano event at New York City over a week ago. Ryan Garcia was one of those young stars who believes in the future of women’s boxing as do retired champions like Sergio Mora.

Promoters like Loeffler, Eddie Hearn, Jake Paul, Oscar De La Hoya and a few others understood the value immediately and are reaping the benefits for early entry into women’s prizefighting.

There is a future.

When a women’s main event can sell out Madison Square Garden with more than 19,000 fans while a rival promoter has an event in Las Vegas that sold a mere 10,000 seats well that pretty much proves the value.

How about 1.5 million separate views watched DAZN for the Taylor-Serrano match while Shakur Stevenson fought Oscar Valdez on the same night.

Julia Celes (4-0-2) beat Gisela Avalos (2-6-1) by decision after four rounds on Saturday May 7. The lightweight bout was held in Buenos Aires.

Nicila Costello (4-1) knocked out Hannah Morgan (0-1) in the first round on Saturday May 7. The super flyweight bout took place at Bowen Hills, Queensland.

Kendall Byrnes (1-0) defeated Jaala Tomat (0-1) by decision after four rounds on Saturday May 7. The super featherweight match was held at Nathan, Queensland.

Denise Stanojev (5-0) knocked out Tamara Miladinovic (0-1) in the second round on Saturday May 7. The featherweight fight took place at Maria Enzersdorf.

Carolyn Redmond (5-0) beat Simone Aparecida (17-21) by decision after eight rounds on Saturday May 7. The super welterweight match was held at Sydney, Nova Scotia.

Segolene Lefebvre (16-0) won by unanimous decision after 10 rounds versus Melania Sorroche (18-3-2) on Saturday May 7. The WBO super bantamweight world title match was held at Nord.

On Friday May 13, super bantamweights Mary Romero (7-2) and Maria Cecchi (7-0) meet at Lombardia for the vacant EBU title.

On Monday May 9, featherweights Jennifer Miranda (6-0) and Sayda Mosquera (9-3-1) meet 10 rounds for a featherweight title at Madrid.

On Saturday May 14, super featherweights Delfine Persoon (46-3) and Elhem Mekhaled (15-0) meet 10 rounds for the regional title at Dubai.

Kate Radomska (3-0) won by decision after six rounds versus Ivette Garcia (0-2) on Friday May 6. The flyweight fight was held in Glasgow, Scotland.

Kirstie Bavington (6-2-2) defeated Timea Belik (5-5) by decision after 10 rounds on Friday May 6. The EBU welterweight title fight was held at West Midlands, England.

On Friday May 13, super welterweights Hannah Rankin (11-5) and Alejandra Ayala (14-5) meet 10 rounds for the WBA and IBO world titles at Glasgow, Scotland. It can be watched on www.fightzone.uk

Mary Casamassa (1-0) beat Jozette Cotton (0-2-1) by decision after four rounds on Saturday May 7. The middleweight fight was held at Murrysville, Penn.

Carmen Vargas (3-0) defeated Kim Colbert (3-21) by decision after four rounds on Thursday May 5. The featherweight bout was held in Pasadena, Texas.

On Saturday May 14, super bantamweights Shurretta Metcalf (10-3-1) and Danielle Bennett (4-1) meet eight rounds for a regional title at Dallas, Texas.