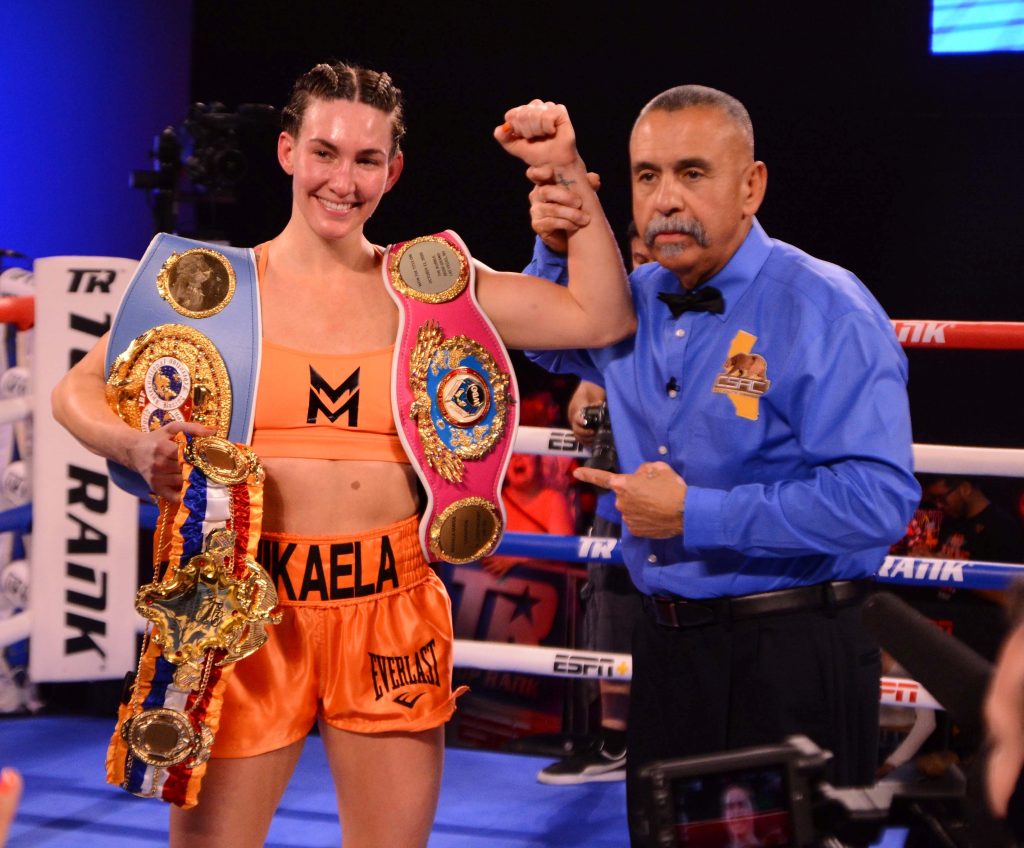 After months of vigorous tossing of social media grenades between rival Americans Mikaela Mayer and Alycia Baumgardner, the acidic war of words is over and now the real action begins.

Top Rank announced Monday it financially backs a unification match between WBO, IBF titlist Mayer and WBC, IBO titlist Baumgardner to decide the real super featherweight champion of the world in the late summer. No date or venue has been established.

It must be a hefty figure for Matchroom Boxing to accept the bid. The British outfit led by Eddie Hearn has been the spearhead for women’s boxing. For them to allow their fighter to trade blows with Mayer must have met their monetary goal.

“Mikaela Mayer’s prodigious talent is only matched by her tremendous ambition,” said Top Rank chairman Bob Arum. “She wants the biggest fights, and Alycia Baumgardner is a worthy champion. This is a huge event and one of the most anticipated matchups in women’s boxing.”

Mayer, a 2016 Olympian for Team USA, has openly challenged all titlists since she entered the professional world and became a contender. Her goal, as stated to thePrizefighters.com: was to unify the super featherweight division before moving on to other weight classes.

On Halloween Night 2020 in Las Vegas, Mayer captured her first world title with a thorough unanimous decision win over WBO titlist Ewa Brodnicka who had never been defeated. Next, she challenged IBF titlist Maiva Hamadouche last November and in Las Vegas the two world champions produced the Fight of the Year. Mayer emerged the winner and now has both the WBO and IBF super featherweight titles.

She had actively challenged all the champions for the past two years on social media. One that she bitterly exchanged words and taunts was England’s Terri Harper who held the WBC title.

Alycia Baumgardner, an American contender was allowed to fight Harper first and that proved to be a mistake. Baumgardner traveled to Sheffield, England and promptly knocked out Harper on her feet on November 13, to rip the WBC and IBO titles away.

Since that win Mayer and Baumgardner have exchanged unfiltered challenges and taunts that could only be settled in the prize ring. Top Rank and Matchroom both agreed to allow their charges to meet in the prize ring later this summer.

“Just know this fight is going to happen because of yours truly,” said Baumgardner on her social media account.

“This was a fight I was pushing for about six months ago when Baumgardner beat Terri Harper,” said Mayer on her social media account. “All my yapping got this fight made.”

Yes, sometimes it is better to speak up.

One of Mexico’s best fighters Kenia Enriquez (23-1) returns to action after more than two years when she meets Gabriela Sanchez (8-4) on Nuevo Vallarta, Mexico on Saturday May 28.

The former flyweight champion had been ranked number one by the WBC as a light flyweight but was never allowed to fight the current titlist Yesenia Gomez who has held the title since September 2018. It was one of the most egregious acts against a fighter by any sanctioning organization.

Now Enriquez is back campaigning at flyweight and looking to resume her status as Mexico’s most feared fighter.

Ironically, her sister Tania Enriquez fought last week and is undefeated. She was victorious last weekend against Nancy Franco.

Yoshida first won the title in 2019 and defended it once. Then lost to Tomoko Okuda by technical decision due to a cut caused by a clash of heads on December 2020. They met again on June 2021 and Yoshida avenged the loss by split decision.

Ozawa currently holds the Japanese Flyweight title and is moving up in weight for this fight.

Maria Gomez (3-0-1) won by decision over Gisela Avalos (2-7-1) after four rounds on Saturday May 21. The lightweight match took place in Buenos Aires.

Juliano Basualdo (8-2) won by knockout in the third round against Natalia Alderete (4-9) on Saturday May 21. The super bantamweight bout took place at Cordoba.

Ailen Agrobert (3-0) won by decision after four rounds versus Natalia Zulema (1-6) on Saturday May 21. The welterweight match was held at Santa Fe.

Florencia Juarez (9-1) beat Maria Mazzarello (3-1) by decision after eight rounds on Friday May 20. The bantamweight fight was held at Buenos Aires.

Ingrid Caicedo (3-0) won by majority decision after six rounds versus Kimberlin Reina (3-6) on Friday May 20. The bantamweight fight was held at Cartagena.

Lucie Sedlackova (15-1-1) won by decision after six rounds versus Milena Koleva (10-14-1) on Saturday May 21. The super lightweight bout was held at Prague.

Jenna Gaglioti (3-0) knocked out Diana Garcia Dominguez (0-3) in the first round on Friday May 20. The middleweight bout took place at La Romana.

Anna Brozzi (4-2) knocked out Nahed Kharchi (7-5) in the second round of their clash on Saturday May 21. The EBU featherweight title fight took place at Nice.

Sarah Bormann (14-0) won by decision after 10 rounds versus Ana Arrazola (28-15-3) on Saturday May 21. The IBO minimumweight title match was held at Offenbach.

Federica Boni (1-0-2) won by technical knockout in the third round over Asako Sugawara (0-2-1) on Friday May 20. The featherweight fight was held at Tokyo.

Tania Enriquez (18-0) defeated Nancy Franco (19-17-2) by decision after eight rounds on Thursday May 19. The flyweight match was held at Tijuana.

Nataly Delgado (9-6-1) won by technical knockout in the second round against Osiris Renteria (0-6) on Friday May 20. The super bantamweight fight was held at Colon City.

Rhiannon Dixon (5-0) was the winner by unanimous decision after six rounds against Mahjouba Oubtil (4-1) on Friday May 20. The lightweight contest took place at Bilbao.

Delfine Persoon (47-3) won by unanimous decision after 10 rounds versus Elhem Mekhaled (15-1) on Saturday May 21. The super featherweight title fight was held at Dubai.

Raven Chapman (3-0) knocked out Gabriella Mezei (11-30-5) in the first round on Friday May 20. The featherweight match was held at London.

Bree Burbeary (1-0) knocked out Klaudia Vigh (3-37-1) in the second round on Friday May 20. The welterweight contest was held at Sheffield.