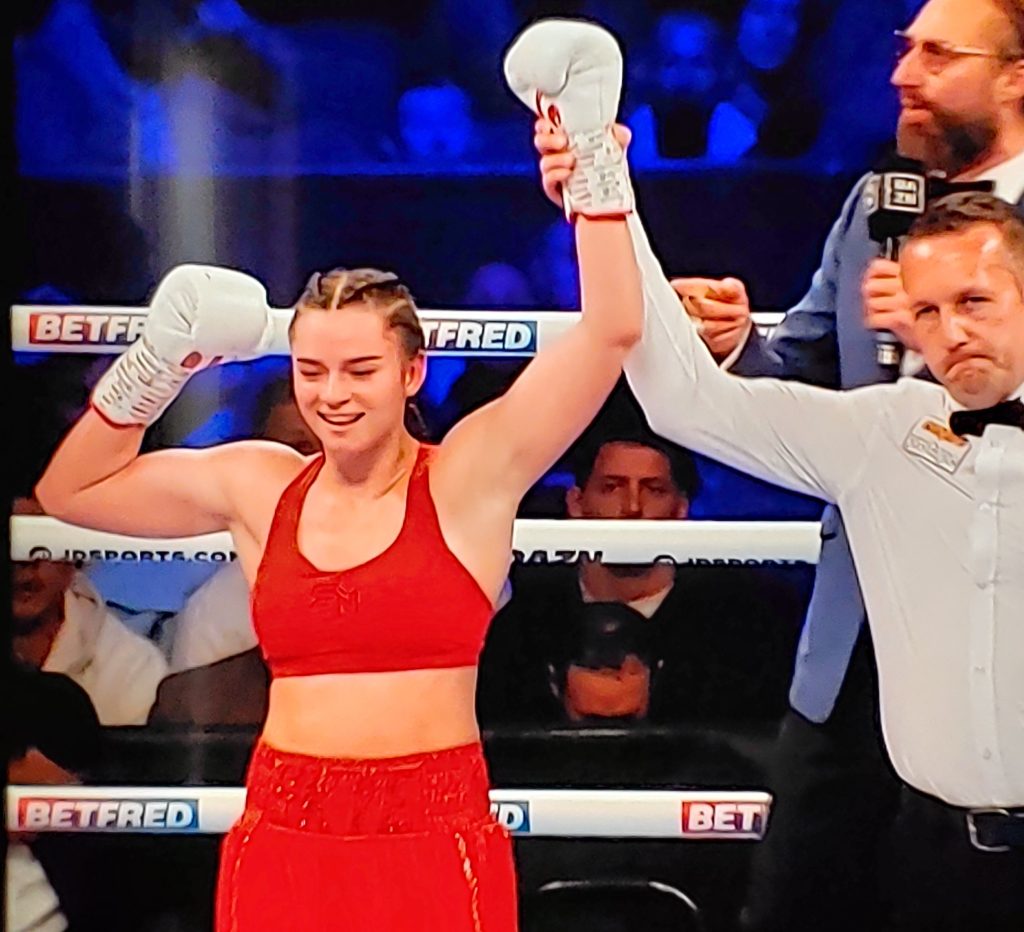 It was Nicolson’s (4-0) fourth victory in three months as she easily out-scored Bouvier (15-11-1) in a featherweight clash at Cardiff, Wales on Saturday. The South American fighter formerly held the world title as a flyweight.

The Aussie fighter with fast hands and fast feet improves every time she steps in the ring. Her trainer has quickly stopped her amateur habits of hit and run tactics that carried her to the Olympics. She has adapted a more pro style.

Professional boxing is very different and Nicolson and team understand this.

Unlike amateur boxing, where a boxer simply wants to out-score the opponent, pro fighting is all about entertainment. No one wants to see a fighter run around the ring and fire jabs. If a fighter has that kind of athletic superiority, then they should be able to knock the opponent out.

Knockouts are what sell tickets, not jabs.

Getting back to Skye Nicolson, the Aussie ignited her pro career in San Diego where she proceeded to run around the ring for most of the fight. Yes, she out-scored her foe that night Jessica Juarez. But exchanges were few and seemed more like an amateur match than pro.

By her third fight, at Madison Square Garden, Nicolson had dispensed with the running tactics and has proceeded to use her athletic prowess in a more aggressive and entertaining fashion. She improves every time she enters the prize ring.

The knockouts should come.

Nicolson, 26, is following the road of other amateur standouts like Katie Taylor, Mikaela Mayer and Claressa Shields who adapted more pro skills and are able to stay in the pocket while dealing out punishment.

She could be the next super star.

It was Juarez’ third world title defense since winning the WBC belt in December 2020.

For years Juarez had to wait at the back of the line. She had campaigned most of her career at flyweight but was unable to get a shot at the title. When she was offered a fight at super flyweight she accepted and won.

Now the Mexico City fighter and younger sister of Mariana “Barby” Juarez, has established herself as one of her country’s best skilled fighters. She has quick hands, quick feet and a keen sense of timing that is difficult to teach.

“I want to fight abroad maybe to unify,” said Juarez, 35, who has never fought outside of Mexico.

Juarez and her sisters always remain ready. They have long been one of the most recognized boxing families in their country.

Flora Pili (5-0) knocked out Anna Ganova (0-5) in the first round on Saturday June 4. The lightweight fight was held at Forbach.

Ema Kozin (22-1-1) stopped Szilvia Szabados (18-19) by technical knockout in the seventh round on Saturday June 4. The super welterweight title fight was held at Aalen.

Michaela Kotaskova (1-0-1) and Patricia Gonzalez (0-0-1) fought to a majority draw after four rounds on Saturday June 4. The welterweight fight took place at Baden.

Nastaran Fathi (5-0) won by technical knockout in the second round over Mina Ghale (0-1) on Saturday June 4. The super bantamweight bout was held at Dubai.

Dee Allen (2-0) won by technical knockout in the fourth round versus Matilde Contreras (1-1) on Saturday June 4. The super welterweight match took place at Swindon, England.

Gemma Ruegg (3-3) won by decision after eight rounds against Claudia Ferenczi (20-93-8) on Friday June 3. The super bantamweight fight was held at Hampshire.