Lure of Big Fights in America
Written by: David A. Avila 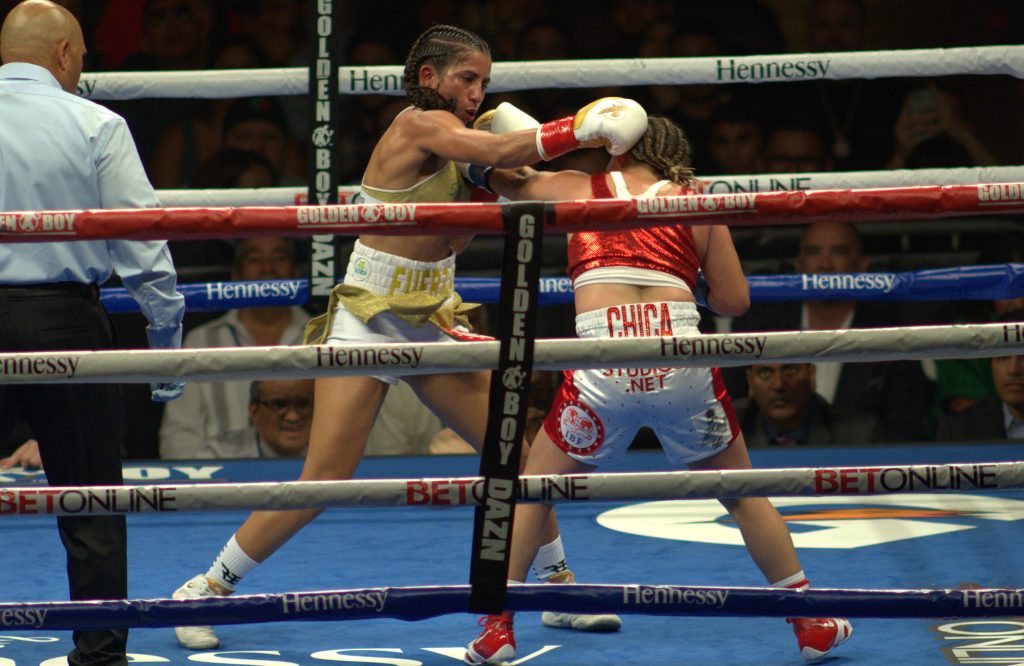 Lure of Big Fights in America Brings Yokasta and Others

A full circle has completed when it comes to female prizefighting in the United States of America.

Fighters from around the world are headed to the US or America as most call it. The latest to arrive Yokasta Valle hails from Costa Rica where she had enjoyed massive fame in her country. A big fish in a little pond.

A stone’s throw from the original Disneyland.

The IBF minimumweight world titlist Valle just signed a four-fight contract with Golden Boy Promotions that has stacked its roster with many of the very top female fighters in the lower weight classes.

Now fighters from around the world have taken notice and are heading toward American shores tout suite.

Back in the 1990s, it was a similar situation. America had finally allowed women to participate in amateur boxing and Christy Martin was knocking out opposition in the professional circuit. Women all over the world were paying attention and European fighters like Lucia Rijker packed their bags and headed toward the USA.

Female boxing was not allowed in United Kingdom, Mexico and other countries back in the 1990s. Mexican fighters like Mariana “Barby” Juarez crossed the border and ventured north to California to train and fight. Many others took the same path.

Women boxers were very popular on small club shows and were paid well to perform. They often received better purses than the men because of their ability to draw fans. Roy Englebrecht Promotions was one of the early pioneers in allowing women to regularly fight on his cards. He remained the only promoter to consistently feature women boxing.

Other promoters joined like Arnie Rosenthal who had numerous boxing cards with only women prizefighting.

But the popularity of women’s boxing dried up for one reason or another. Perhaps the biggest reason was lack of knowledge in the female fight game by promoters. Another was the lack of exposure. Finally, the pool of women fighters was very shallow back then.

Women fights were seldom televised and even fewer journalists covered their fights.

Meanwhile, as female boxing suffered in America, it began to thrive in Europe, especially in Germany where Regina Halmich and Daisy Lang were selling out arenas and doing well. They didn’t suffer from lack of exposure.

Other countries like Argentina, Japan, Sweden, and United Kingdom joined the frenzy and as female boxing’s popularity grew, the number of participants mushroomed too.

Very few people understand that many women like to fight. Though women found obstacles in professional boxing, no such obstacles faced women in mixed martial arts.

Ultimate Fighting Championship, the top MMA promotion group, had not included women in MMA at first. But when rival promoters enjoyed success featuring women, soon UFC looked for a female fighter to lead the way and they found Ronda Rousey.

Rousey had medaled in the 2008 Olympics in judo and then acquired enough MMA fighting skills to power her way through several foes in record time. UFC’s Dana White signed her and she continued to amaze fans with her skills, fighting persona and looks. She sold out several arenas along the way.

I was at a luncheon in North Hollywood when Rousey was first introduced by Dana White to a few journalists at a steak house. Immediately it was evident she had confidence and could communicate. When she headlined a UFC card at the Honda Center in Anaheim on February 2013, a raucous crowd of more than 12,000 showed up and saw her win.

Women’s prizefighting in America had arrived. Whether in MMA or boxing it was evident that a female fighter could draw massive crowds. Rousey proved that emphatically.

Rumors had spread about the Olympic Games including female boxing. When it was finally approved in 2012, that re-ignited amateur female boxing and the numbers continue to grow. Gyms all over California have women boxing.

The 2012 London Olympics saw Claressa Shields, Katie Taylor and Marlen Esparza emerge out of those games and soon become professional boxing world champions. And it was British promoter Eddie Hearn with Matchroom Boxing who signed Taylor and several other top British women to contracts.

While other promoters doubted the marketability of women, it was Hearn who dived in and showcased Ireland’s Taylor to the world with boxing shows in New York and London. Other promoters claimed it could not be done. Hearn proved it could and Taylor became the first million-dollar female fighter in women’s boxing.

Not to be out-done, an American self-promoter named Jake Paul who successfully staged million dollar gates for his own fights, saw Amanda Serrano and signed her to his wagon. He propelled her to levels others could not and she became the second woman to earn a million-dollar purse.

Other women in American are now earning six figure paydays on a regular basis and the word is out. Its 1990s all over again but with social media powering bigger numbers and with live streaming allowing worldwide audiences, who knows how far women’s boxing will go now.

Yokasta Valle is just a recent fighter from outside of America who will be testing the market. Others are coming from Asia, South America and other parts of the world have arrived like Arely Mucino, Naoko Fujioka and Anabel Ortiz. Its going to be a very interesting period for female prizefighting.

Calista Silgado (20-14-3) knocked out Daila Vasquez (0-2) in the third round on Saturday June 11. The featherweight fight was held at Santiago de Tolu.

Venezuela’s Mayerlin Rivas (17-4-2) knocked out Karina Fernandez (17-7-1) in the fourth round on Friday June 10. The WBA super bantamweight title fight was held at Guadalajara. It was Mayerlin’s first defense of the title she won in Panama.

Christina Cruz (3-0) won by decision after four rounds versus Maryguenn Vellinga (3-3-2) on Saturday June 11. The flyweight bout was held in New York City.