Ramla Ali is Victorious in London Return
Written by: David A. Avila 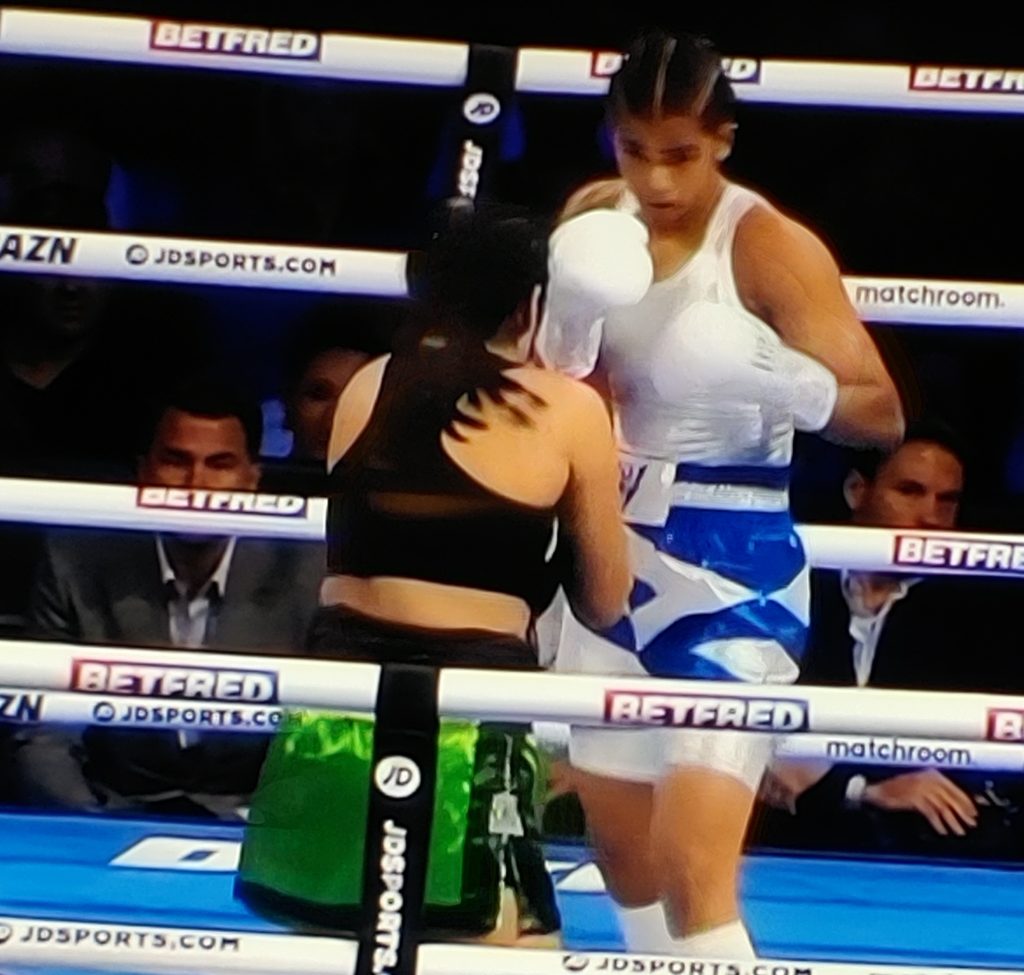 Super bantamweight fighter Ramla Ali returned home to England with a new team, new style and proved it was no problem in defeating the very tough Agustina Belen Rosas by unanimous decision on Saturday.

“I was a bit nervous having this many people come out and watch me the first time. I didn’t want to disappoint anyone. As soon as it started that was it,” said Ali about the pressure of fighting in front of fans.

A large crowd of more than 7,000 lured by the return of their favorite Ali (6-0, 1 Kos) saw the model, activist and super bantamweight prospect defeat Belen Rosas (6-2) by convincing fashion at the O2 Arena in London. A short drive from Ali’s old neighborhood.

Ali has spent more than seven months in Los Angeles, California learning a pro style that sometimes proves difficult for amateurs making the transition to the professional level. Under American trainer Manny Robles this was her first fight in the United Kingdom as his student.

The first two rounds saw Ali trying to establish distance behind a jab and straight right cross. She seemed slightly apprehensive and though she connected, she allowed Belen Rosas to counter after the short exchanges. But Ali also established the attack to the body and that kept the Argentine fighter thinking. Belen Rosas was able to connect with winging punches but not enough to win a round.

By the third round Ali seemed slightly more comfortable but kept allowing Belen Rosas opportunities to counter. At the end of the frame a combination of body blows by Ali landed solidly.

Ali countered a Belen Rosas attack in the fourth round and added a couple of body shots. It seemed to give the Argentine fighter more hesitation and led to a more passive round.

“She is very durable,” said Ali, 32, of the Argentine fighter.

The fifth round saw Ali move in more aggressively with combination punching to the body and head. The one-two combination to the head was always there for the longer reach of Ali and when adding the attack to the body, it seemed to open up more firing lanes. Ali took advantage with her best attack. Belen Rosas charged forward to counter and butted the hometown fighter with her head at the end of the round.

From the sixth round on Ali seemed in total control of the distance and when any exchange would take place. A left hook connected on Belen Rosas but she did not seem affected by the blows. Ali was in cruise control and looked solid.

Belen Rosas was never stunned or near collapse but could not find a way to effectively close the distance. Ali kept firing jabs and one-two combinations that scored repeatedly. Each round seemed to add confidence to the native Somalian. Ali unleashed a six-punch combination that left no doubt she was in control.

After eight rounds the referee scored the fight 80-72 for Ali.

Ali was satisfied with the decision win.

“I wanted to get her out, but she isn’t going anywhere. She has a chin on her. She is really durable,” said Ali.

The victory by decision after eight rounds by Ali showed that she can endure a 10-round fight if necessary in world title competition.

“I think she is a couple of fights away from the world champion. There Is no in-between,” said Hearn explaining that the dearth of competition at super bantamweight allows Ali to make the jump. “It won’t be long until that opportunity comes.”

Back to America for Ali until the next fight in the United Kingdom.