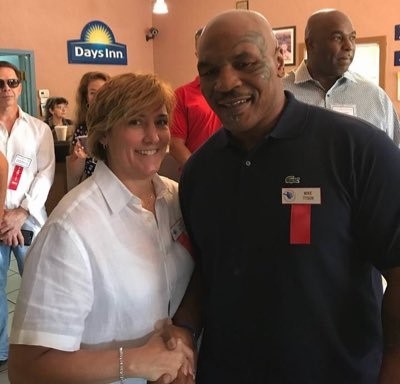 The Journey of Christy Martin and More Female Boxing News

Over the weekend Christy Martin and spouse Lisa Holewyne were seen at the Top Rank fight card at Pechanga Resort Casino in Temecula, Calif. Fans and other celebrities gathered around for photos and casual conversation.

Even years after her last pro fight Martin carries respect and clout. She was recently inducted into the International Boxing Hall of Fame in Canastota, New York.

If any single person can be portrayed as the spark that ignited the Big Bang Theory in women’s boxing, its’ Christy Martin.

A biography was recently released called Fighting for Survival: A Journey Through Boxing, Abuse, Murder and Resurrection last month.

“For a lot of years even before the documentary. People were talking to me to do a book. For whatever reason Ron Borges reached out to me and we just clicked. This is perfect,” said Martin about the doing the book. “I think part of it worked because I knew Ron from the 90s and I knew he wasn’t a fan of women’s boxing and I won him over at least to me.”

Over the three decades I’ve covered women’s boxing, whenever I asked prominent fighters in the past like Laila Ali how they got started, almost all point toward the “Coalminer’s Daughter” as the reason they even considered boxing.

“I don’t think I realized it at the time. The more distance past my career I realize I did make a difference in the sport of women’s boxing. I got crazy exposure from Don King on Mike Tyson undercards. I showed a lot of females there is another option,” said Martin. “Even though I know there were women before me who made it a little bit easier for me.”

Martin was the catalyst for many female fighters as she battled opposition like Melinda Robinson, Bethany Payne and Andrea DeShong on televised Don King cards during the 1990s. She was fierce and relentless in every single one of her contests.

Today, she promotes boxing cards mostly in South Carolina where she’s built up a strong following in an area that was sparse in the prizefighting sport. Reading how Martin began fighting is a riveting tale. But her journey is truly mixed with other valuable lessons involving sexual preference, political influences, money, power and survival.

It all began years ago in a small town in West Virginia, she was a competitive athlete and played basketball in high school and college. And one day while walking in town she spotted a sign advertising the Toughman Contest. She saw it and wanted in though women were not included at first.

After winning the competition including a one-punch knockout win Martin was hooked.

“The crowd went into a frenzy! My God, the reaction was crazy. I can still feel exactly what it did to me. It was awesome. I could feel the adrenaline rush from the crowd, and that was it for me. I was hooked on boxing. That moment when you knock someone out and the crowd reacts is better than any drug.”..stated Martin in her book.

From that first fight in 1987 until her last fight in 2012, the “Coalminer’s Daughter” participated in the prize ring and amassed 49 wins with 32 knockouts and only seven losses and three draws.

Martin was involved in one of the greatest female fights ever held at Madison Square Garden when she fought Isra “The Raging Beauty” Girgrah on August, 23, 1997 for the honorary WBC lightweight title. She felt their fight would never be surpassed until she sat ringside with Girgrah to watch Katie Taylor and Amanda Serrano battle toe-to-toe last April at MSG.

“I turned to Isra Girgrah and said we just lost our spot,” said Martin about witnessing the titanic battle between Taylor and Serrano. “They just overtook us. (laughs). Because they sold out Madison Square Garden, they both made more than a million dollars, and it was a great, great fight.”

The Hall of Fame fighter said most prizefighters today fail to realize that winning is not the only key to success. Martin said she was taught by Don King on how to become successful in the prize ring as a fighter or promoter.

“You have to compete against guys that are going to fight back and bring energy and excitement. Give them something to hold onto,” said Martin emphasizing entertainment value and pointing out Serrano and Taylor’s performance. “They could have sold out the house but stunk up the fight. But they did what they had to do. Fight.”

Martin’s life story has been one of amazement and terror. Her successful emergence after being nearly killed by her ex-husband has exhibited her inner fire that has led to success in and out of the prize ring. She’s a warrior through and through and he book explains her journey with aplomb and dignity. What a great book.

Sandra Villarruel (1-3-2) and Carmen Bratschi (0-4-1) fought to a draw after four rounds on Saturday July 16. The super flyweight bout took place at Cordoba.

Jeyssa Marcel (7-0) won by decision after six rounds versus Tijana Drascovic (1-3) on Saturday July 16. The super bantamweight contest was held at Pointe a Pitre.

Nataly Delgado (10-6-1) won by technical knockout in the sixth round over Estefania Alvarado (2-2-1) on Saturday July 16. The bantamweight fight was held in Panama City.