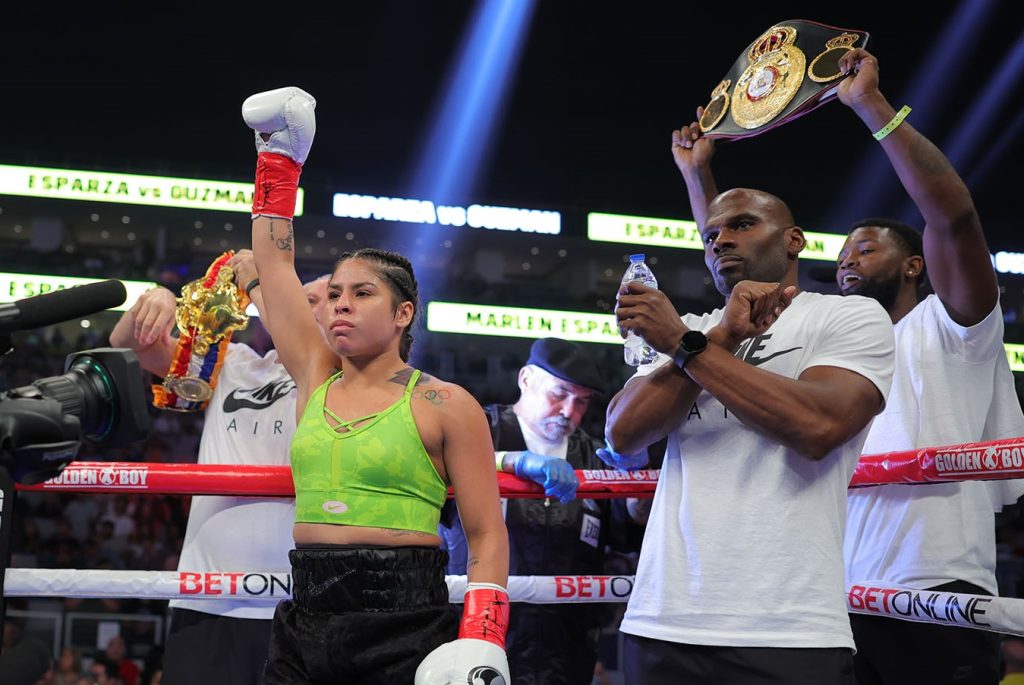 Marlen Esparza Wins in Texas, Sulem in California and Sandy Ryan in England and More News

Marlen Esparza continued to put a stranglehold on the flyweight world title with another solid performance in defeating the very strong but unknown challenger from Venezuela Eva Guzman.

Now that the mandatory has been settled, let’s see known challengers face Esparza.

The WBA demanded months ago that whoever held the WBA flyweight title should defend against Guzman though she had never faced or beaten a contender. Luckily, the Venezuelan fighter was actually a decent foe, but many other more experienced and talented flyweights were overlooked.

Mexico’s Kenia Enriquez, for example, remains at the top of the flyweight list despite moving up a weight division after years of all light flyweight champions avoiding the Tijuana fighter. Enriquez is now a full-fledged flyweight with an abundance of talent.

Other possible challengers for Esparza are Argentina’s WBO world titlist Gabriela Alaniz and current IBF flyweight titlist Leonela Yudica. Both are undefeated with Alaniz the younger champion at 26. Yudica is 33 like Esparza.

Last weekend Esparza demonstrated there is more to prizefighting than throwing blow after blow as she slipped and countered and allowed the fierce Guzman to run into punches. Though the Venezuelan never went down, she showed zero defense and that was the difference in the scoring.

Urbina fought toe-to-toe against Vizcaino who was resilient and strong but couldn’t match the Arizona fighter’s defense and ability to slip punches and retaliate. It was the difference between winning and losing as Urbina won the six-round fight by split-decision.

One added note: why not fight three-minute rounds?

Maybe I’m over-thinking this but it seems most promoters simply want to get the female fights out of the way. That’s a bad mistake.

A rematch took place between Sandy Ryan and Argentina’s Erica Farias last weekend. This time the taller and younger British fighter adjusted her style and won the rematch.

Ryan had the advantage in height, reach and seemingly power when they first met earlier this year in England. She lost to the much more experienced Farias, a former lightweight and super lightweight world champion. The Argentine fighter had faced similar disadvantages before and knew how to circumvent them.

In their second clash, Ryan made the adjustments early and used her height and reach with jabs and movement. It took Farias several rounds to make her own adjustments, but it was a little too late and Ryan took the rematch.

Will there be a third encounter?

Probably not. Already the perky Ryan was calling out current WBC and IBF titlist Chantelle Cameron for an all-British showdown.

Last Thursday, a lightweight shootout between Chelsey Anderson and Aida Satybaldinova lit up the sold-out crowd at the Quiet Cannon Golf Course in Montebello, California. It was packed with celebrities such as Dana White, Seniesa Estrada and Halle Berry in attendance.

Both Anderson and Satybaldinova are in their 30s so there is no time to waste in their pursuit of world title challenges. Neither fighter avoids tough matchups.

From the opening bell the taller Anderson was looking to set up that right hand bomb she possesses. It was obvious. Satybaldinova had been knocked out by that same punch several years ago against Selina Barrios and has learned plenty on how to avoid it.

Satybaldinova, a native of Kazakhstan, has spent the past four years in Southern California learning the tricks of the trade. She was a former weight-lifter and came to America to become a boxing world champion. She’s learned plenty and showed it against the hard-hitting Anderson.

It was give and take with each fighter making adjustments. Anderson found success with uppercuts and hooks while Satybaldinova was able to work inside and score with overhand rights.

After eight rounds Anderson was judged the winner of the tough match by unanimous decision 77-75 twice and 78-74 and wins the WBC International title and a high ranking. With only a handful of amateur fights in her resume Anderson has been able to navigate the lightweight standings quickly under the guidance of boxing and MMA veteran Erin Toughill.

Anderson can whack with either hand and uses her height wisely. She’s still learning but at 31 she cannot afford to work out the kinks with easy fights. Thus, she battles against tough competition like Satybaldinova who also aspires to fight for a world title.

The crowd was delighted by the lightweight collision put on by Tom Loeffler’s 360 Promotions.

Caroline Veyre (1-0) beat Lilliana Borquez (3-3-2) by decision after four rounds on Saturday Aug. 6. The featherweight bout was held in Cornwall.

Linn Sandstrom (6-2-1) defeated Khwunchit Khunya (4-12-1) by unanimous decision after eight rounds on Sunday Aug. 7. The super flyweight match was held in Paranaque City. Also, Rica Aquino (1-0-1) knocked out Erika Ballen (0-1) in the first round of a bantamweight fight; minimumweights Aisah Alico (7-12-1) and Allen Solidarios (0-0-1) fought to a draw.

Flyweights Phumarin Yoohanngoh (0-1-1) and Mariana Scombati (1-0-1) fought to a draw after six rounds on Saturday Aug. 6. The flyweight match was held in Bangkok.

Debora Rengifo (18-9-1) defeated Rosana Colmenarez (2-15-1) by decision after six rounds on Friday Aug. 5. The flyweight fight was held in Caracas.