Kenia Enriquez Returns With KO Win in Mexico
Written by: David A. Avila 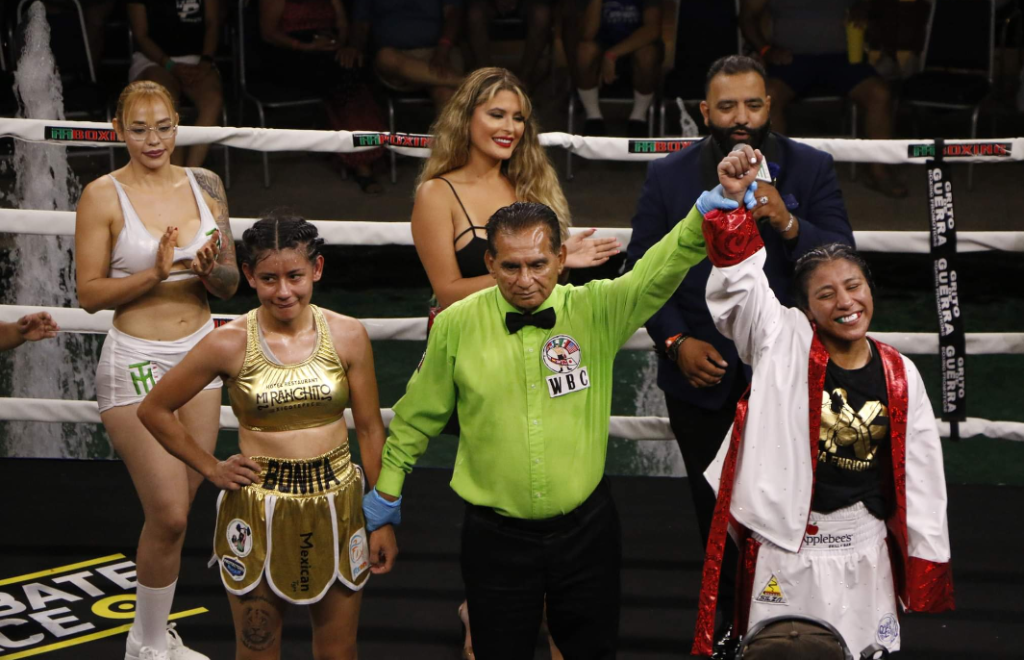 Mexico’s Kenia Enriquez and Lulu and More News and Notes

Along the Mexican blue water shores Kenia Enriquez proved that more than two years of inactivity in the prize ring was not enough to prevent a knockout win over previously unstoppable Gabriela “La Bonita” Sanchez in their flyweight clash.

Enriquez is back and just as strong as ever.

“It felt natural like a fish in the water,” said Enriquez, 28, on returning to action.

Tijuana’s Enriquez (24-1, 10 Kos) moved back to flyweight after five years as a light flyweight and was able to defeat a determined effort by Sanchez (8-5) who never wavered on Saturday May 28, at the Mexican resort town of Nuevo Vallarta.

After years of forced limbo as the WBC number one light flyweight contender, Enriquez remained vigilant and always ready to fight. Though that sanctioning organization never allowed her to fight the champion Yesenia Gomez, she kept quiet and kept ready.

Now Enriquez is fighting as a full-fledged 112-pound flyweight.

Sanchez, 27, proved willing and ready to meet Enriquez and from the opening bell never backed off against the Tijuana fighter. Despite her nickname of “La Bonita” the flyweight from Puebla, Mexico was fearless and aggressive.

Enriquez advanced behind a very stiff jab that often moved Sanchez backward and the Tijuana fighter never fought in her counter-punch style that previously was her trademark. Apparently, those days are gone under her new trainer Raul “Jibaro” Perez a former two-time world champion. Now she’s a full on Mexican-style hunter.

In the fourth round Enriquez connected with a right cross and down went Sanchez. However, the referee called it a slip despite a clear punch had caused the knockdown.

“I believed I knocked her down,” said Enriquez.

Enriquez continued to pummel away at the resilient Sanchez and often seemed to be on the verge of stopping the Puebla fighter, especially in the seventh round when a left hook connected solidly

“From the first round I thought I would knock her out, but she was very strong,” Enriquez said of Sanchez.

In the 10th and final round Enriquez unloaded quickly with a four-punch volley and connected with a left hook that staggered Sanchez. Then Enriquez opened up and the referee stepped in to stop the fight though Sanchez was still standing. It was a good stoppage.

With her newly adapted hunter style, Enriquez feels confident she can achieve her goal of becoming an undisputed flyweight world champion.

“My goal is to impressively beat Marlen Esparza so I can win two of the flyweight world titles, said Enriquez. “I want to become undisputed world champion.”

This is Juarez third defense of the title she won back in 2020 when she took the world title from Guadalupe Martinez. She has not lost since her fifth fight back in 2014 when she was still learning the pro game. That was 31 fights ago.

The younger sister of Mariana “Barby” Juarez has proven to have a different boxing style than her sister. Lulu is more of a counter-puncher who uses movement to dart in and out and shows expert timing.

Mary Spencer (5-0) defeated Yamila Reynoso (12-11-3) by decision after eight rounds on Saturday May 28. The welterweight match was held in Ontario.

Irais Hernandez (3-4-2) knocked out Luisa Meza (0-5) in the fifth round on Tuesday May 24. The middleweight bout took place at Santa Marta.

Katiana Petit-Homme (1-0) knocked out Daniela Ramos (0-3) in the first round on Saturday May 28. The super featherweight bout took place at Santo Domingo.

Narymane Benloucif (1-0) won by decision after four rounds versus Marijana Dasovic (0-14-1) on Saturday May 28. The lightweight match was held in Auterive.

Phannarai Netisri (11-0) won by knockout in the fifth round over Crystal Garcia (10-2) on Sunday May 29. The super bantamweight title fight took place in Hamburg.

Beke Bas (16-0) won by unanimous decision after six rounds against Tereza Dvorakova (4-8) on Saturday May 28. The lightweight bout took place at Kaiserslautern.

Alessia Vitanza (2-0) defeated Aleksandra Vujovic (4-19-2) on Saturday May 28. The lightweight match was held in Rome.

Kenia Enrirquez (24-1) won by technical knockout in the 10th round over Gabriela Sanchez (8-5) on Saturday May 28. The flyweight clash was held in Nuevo Vallarta.

Ellen Simwaka (10-5-2) defeated Sharadene Fortuin (13-2-1) by split decision after 10 rounds on Thursday May 26. The African bantamweight title fight was held at Johannesburg.

Yuko Kuroki (19-7-2) knocked out Sothita Sitthichai (3-1) in the second round on Saturday May 28. The minimumweight fight was held at Pathum Thani. Also, super flyweight Chisakan Ariphipat (14-1-1) defeated Pornpimon Pongpaew (1-2) by decision after eight; minimumweight Sumire Yamanaka (5-0) knocked out Pichada Bunmee (1-1) in the third round; bantamweight Hinami Yanai (2-0) won by technical knockout in the third round against Daoprakary Trathong (0-2); and minimumweight Cecile Cortez (4-0) won by decision over Manatsawee Srithongkham (1-5) after six rounds.

Jaica Pavilus (3-5-1) won by unanimous decision after six rounds versus Mia Ellis (4-1) on Saturday May 28. The super featherweight bout was held in Brooklyn.