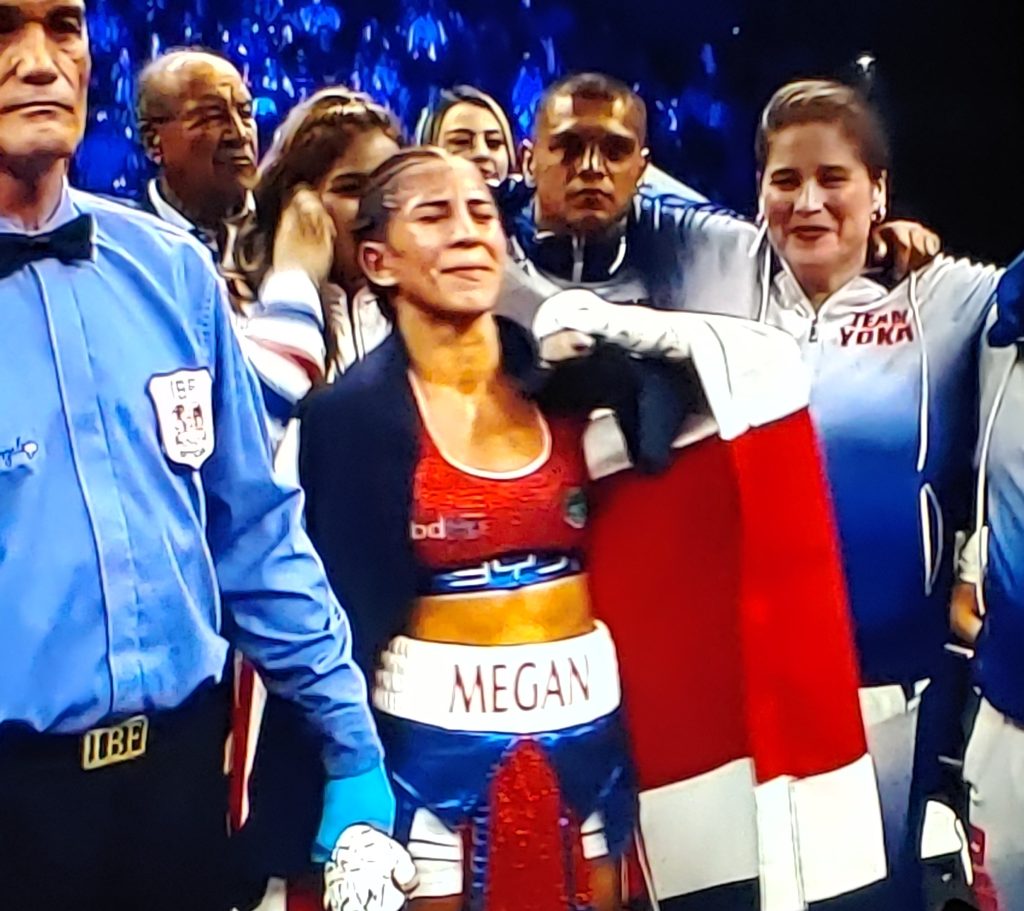 It was Valle’s first fight since signing a contract with Golden Boy Promotions in addition to an already existing MarvNation Promotion contract.

In the opening rounds it was obvious that Nguyen could take a blow as Valle connected quickly, but the Vietnamese fighter barely moved from the impact. Instead, they exchanged with neither inflicting damage. Valle held whenever she was close. But soon resorted to pushing off.

It’s a new wrinkle to her close-in fighting tactics.

Soon, Valle began finding the range and rattled off four and five-punch combinations and moving slightly out of range. Nguyen was willing to exchange but often fired too late to connect. On occasion she did connect but with no effect.

In the fourth round, the speedy Costa Rican fired off several sharp one-two combos then unloaded a big lead right-left hook combination that stopped Nguyen from advancing. Still, the Vietnamese fighter moved forward and never backward.

When Nguyen seemed to be timing Valle’s attacks, the Costa Rican fighter began using multiple feints to offset any traps.

Valle was in total control and her conditioning was on point.

Nguyen had defeated Japan’s Etsuko Tada for the WBO version a year ago and this was her first title defense. Valle was simply too fast and too well-conditioned to allow slip-ups in her attack. And once she got comfortable, she remained inside and slipped and countered Nguyen’s counter attacks.

Everything worked for Valle who won every round on all three judge’s cards 100-90 and becomes the WBO and IBF minimumweight titlist.

“I dedicate this victory to all the children, to all Costa Rica this win was for you,” said Valle. “I want to thank Thi Thu Nguyen she is a great warrior…let’s go for all the titles.”

In a rematch, Southern California’s Adelaida “La Cobra” Ruiz (12-0-1, 6 Kos) proved against Mexico’s Sonia Osorio (15-8-2) that she was the better fighter in winning the interim WBC super flyweight title by unanimous decision after 10 rounds.

About 18 months ago both met in Mexico and a clash of heads forced the fight to be stopped and the fight was declared a technical draw. It was a mar on Ruiz’s undefeated record and she sought to prove her superiority and did so thousands of miles away from home.

Ruiz showed off her lightning left hooks and counter left hooks immediately in the first round. Osorio tried to duck under but was caught by the snapping Ruiz hooks. And when Osorio attacked with her head down, that allowed Ruiz to unravel her rapid combinations.

Then, the fight slowed down.

Not until the scores were read aloud to the crowd after the first four rounds – according to WBC rules – then Osorio realized she needed to boost her attacks and take chances against the volume punching Ruiz.

Osorio had her moments and connected especially with the overhand rights, but Ruiz responded immediately with her left hooks to the body and head. Though her combos were not always accurate, those that connected caused Osorio to abandon her attacks.

Neither fighter suffered visible bloody damage, but after 10 rounds the judges scored the fight 100-90, 99-91, 98-92 all for Ruiz who becomes the WBC interim super flyweight titlist. The current WBC champion is Lourdes “La Pequena Lulu” Juarez of Mexico City.

Ruiz, 33, the mother of three school-aged children, was ecstatic when the decision was read.