Another Look At Chantelle Cameron Win and More News
Written by: David A. Avila 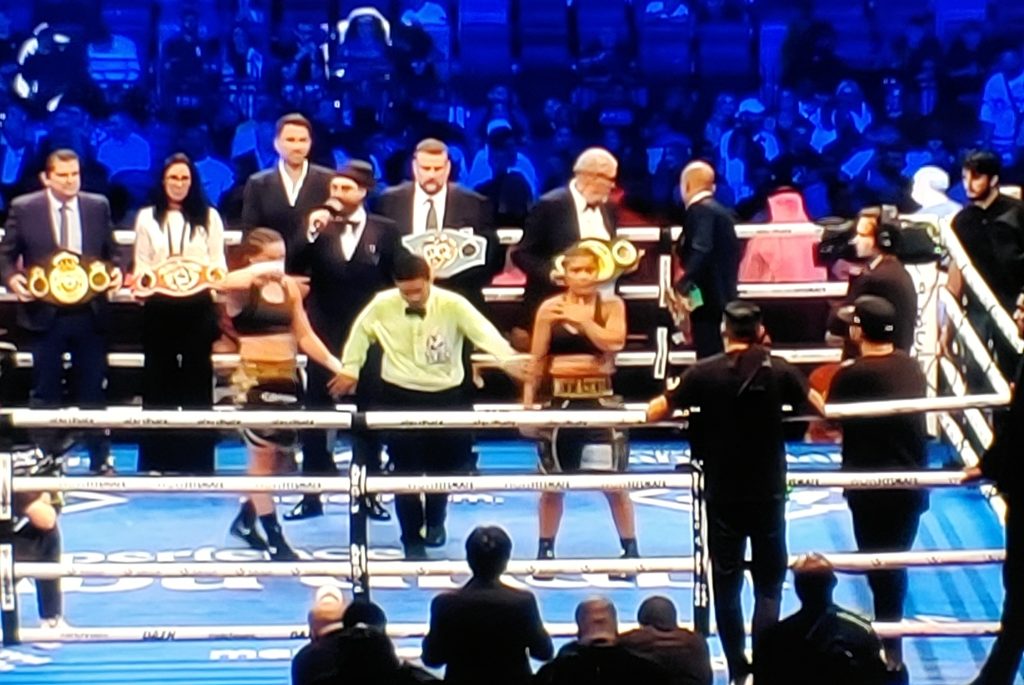 Another Look at Cameron and McCaskill’s Battle, Seniesa Estrada, Natasha Jonas and More

As Chantelle Cameron was hailed the winner over Jessica McCaskill to become undisputed super lightweight champion in an entertaining battle of wits and determination, it signaled another step forward for women’s boxing.

It also signaled that the two-minute round should be eradicated for good.

Cameron and McCaskill’s battle between two elite prizefighters was yet another example of how far women have advanced in the finer points of professional boxing. It was not just brawling and firing wild blows in 120 seconds, it was strategy, precision and changes throughout the 10 rounds by both Cameron and McCaskill at Abu Dhabi, United Arab Emirates last Saturday. A rematch between Cameron and McCaskill is a possibility.

One more minute a round would have been even more exciting.

Very few in the boxing world adore the two-minute round. Judges especially prefer longer rounds to make it easier to differentiate which fighter won the round. A mere 120 seconds is simply not enough time. It becomes very hazy to determine the winner.

Several top-notch judges I spoke with, who requested to be anonymous, made it clear they do not like judging women fights solely because of the two-minute round. But any changes will have to come from promoters who seem to prefer two-minutes. They want the female fights over quickly, not understanding that fans have become more enamored with women’s pro boxing.

Promoters are stodgy people. They are cemented in their old ways and refuse anything new unless proven wrong.

Just last month two other elite fighters Claressa Shields and Savannah Marshall put on a high velocity performance that saw the heavy-handed power slugger Marshall adapt to Shields off-the-charts hand-speed and precision by corralling her against the ropes. Then, we saw Shields show how to fend off attacks against the ropes with slipping and counters. It was all high-level stuff that was foreign to women’s boxing save a few fighters a decade ago.

The women’s fight game has advanced to another level. Two-minute rounds do an injustice to fans and fighters. It’s time to make all fights three-minute rounds.

This will be Estrada’s first match fighting for Top Rank after almost a year has passed since her last fight when she knocked out then undefeated Maria Santizo. At that time, she was fighting under Golden Boy Promotions. Since then, she moved over to Top Rank and becomes the second female fighter signed with the Las Vegas-based organization along with Mikaela Mayer.

Estrada utilizes an unorthodox style mixed with superior hand-speed and reflexes and is one of the few women that can score a knockout with a single blow. She established the record of knocking out an opponent in seven seconds a few years ago. Millions have watched that knockout on Youtube.com.

Is there anyone with a better left hook than Estrada?

Dicaire, 36, fights out of Canada and utilizes her agility and speed to maneuver in and out of danger. She prefers to fight at a distance while using a jab and occasional combinations. Her only loss came to Claressa Shields. Join the crowd. The Canadian fighter is not afraid to mix it up as she showed in her fight with Shields.

Jonas, 38, prefers to fight as a counter-puncher and holds her ground. She has power and quickness and an extensive amateur background. The British fighter already has battled Katie Taylor, Terri Harper at lightweight and moved up several weight divisions to defeat Chris Namus and Patricia Berghult.

It looks to be an outstanding match between contrasting styles.

Maria Baumstarh (6-6-1) won by knockout in the fourth round over Camila Avaca (2-3-2) on Friday Nov. 4. The light flyweight bout took place at Buenos Aires.

Lydie Bialic (2-1) won by split decision after six rounds against Sheila Garcia (0-2) on Saturday Nov. 5. The bantamweight match was held in Auch.

Mizuki Matsuoka (1-4-1) knocked out Sawako Fukuhara (0-4) in the first round on Wednesday Nov. 2. The atomweight bout took place at Tokyo. Also, Nodoka Furukawa (1-0) beat Federica Boni (1-1-2) by decision after four rounds in a featherweight match.