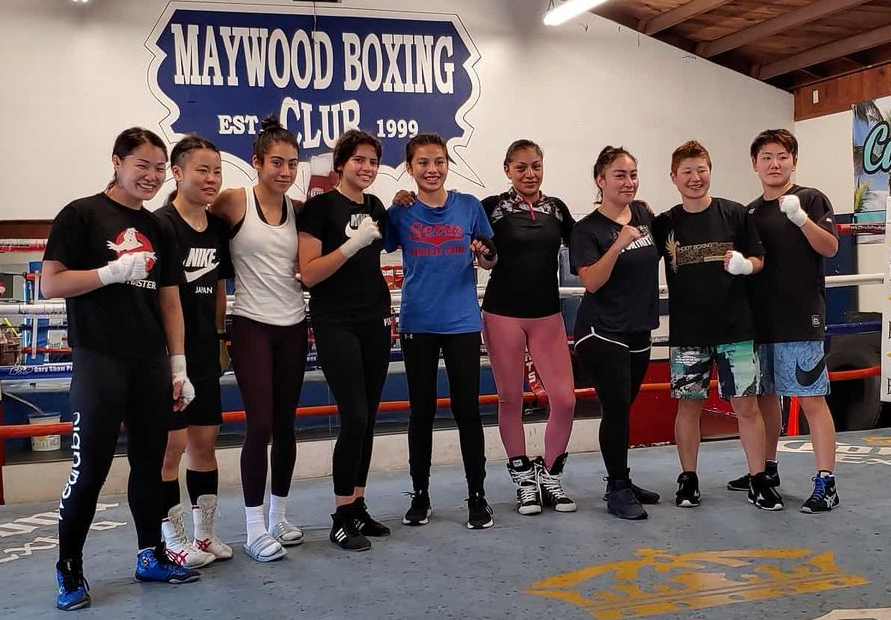 Warrior cultures such as Japan’s and other countries with similar history seem to develop a taste for prizefighting even among the women. Despite a lack of interest by its own big sports promoters, the Japanese women move forward.

Ever since Japan legalized female boxing in the early 2000s its participants have dominated the lower weight classes for two decades.

World champions like Naoko Fujioka, Miyo Yoshida and others now seek to cross the Pacific Ocean to test their skills against American fighters. Most of the Japanese fighters consider the USA to be the true test especially in the lower weight classes from 102 to 118 pounds.

“I want to make a name for myself as a world champion in America,” said Yoshida who twice won world titles in the 115-pound weight limit super flyweight division.

Yoshida and many other Japanese fighters seek the challenge of fighting in front of American audiences under the big glowing lights of Las Vegas, New York or Los Angeles. Its their dream and recently a trio of champions arrived on American shores to pursue it.

“I want to shine on the big stage,” Yoshida said.

Earlier this year, Naoko Fujioka, the boxer known as Japan’s greatest female fighter, battled against America’s Marlen Esparza in a flyweight world title unification bout in San Antonio, Texas. It was a furious battle between the two world champions and Esparza was declared the winner by decision.

Fans were excited by the action and ferocity displayed by both flyweights. It was shown worldwide by DAZN streaming services and the fighters received plaudits for their abilities.

“American audiences love aggressive fighting styles. I have to become a boxer who can take down a foe with a blow,” said Fujioka who has won five division world titles, more than any other woman in history except the great Amanda Serrano who has seven.

Both Yoshida and Fujioka have aggressive styles.

Though Fujioka lost her WBA flyweight title she accepted it and has moved to California to continue her quest of challenging the best in America. She had traveled to California many times in the past five years and discovered another reason it’s called the Golden State. No other place in the world has as many boxing gyms, especially in the Southern California area.

In South El Monte, Fujioka met one of the master trainers in the sport Ben Lira. He’s also considered one of the foremost coaches for women prizefighters and has previously tutored Mariana “Barby” Juarez, Lourdes “Lulu” Juarez and many others.

Fujioka quickly picked up some added skills from Lira, who also has worked with Gennady Golovkin, Miguel Angel Gonzalez, and the late Hector Lopez.

“The best thing about Naoko is she learns quickly and listens,” said Lira, who currently works the corner for Jojo Diaz, Sebastian Fundora and Adrian Corona. “You don’t have to tell her twice.”

Fujioka has the ability to join both.

“I’d like to continue challenging fighters in the U.S. as long as I have a chance,” said Fujioka who has fought twice on American shores. She defeated Sulem Urbina in 2021 in Los Angeles. “My ultimate challenge would be Seniesa Estrada.”

Many consider Estrada the best fighter under 126 pounds.

Because she has the ability to fight from 105 pounds to 118 pounds Fujioka has a wide range of possibilities. It’s not just unique to Fujioka but for many other Japanese whose diet consisting of mainly fish and rice. It helps them maintain their lower weight.

Hailing from the southern coast of Japan, the former super flyweight champion Miyo Yoshida visited Southern California three years ago and sparred with several American fighters. She has returned to challenge fighters in the US. She wants to fight the best and be recognized worldwide.

“Due to the cost issue, I don’t have many opportunities to meet overseas players,” said Yoshida who held the WBO super flyweight world title twice. “I have always wanted to fight on the stage of Las Vegas in the United States.”

Yoshida has a daughter and is currently a single mother aside from being a prizefighter seeking opportunities in the USA. It’s a tough road but she herself grew up with only a mother in Japan.

“My mother tells me to live as I like without regrets,” said Yoshida, 34, whose daughter is under six years old.

At age 20, Yoshida departed Kagoshima to live and learn martial arts in Hawaii.

“In order to change myself, I went to Hawaii alone to study martial arts,” said Yoshida.
“I came to the world of boxing after experiencing kickboxing and being an MMA fighter.”

Since fighting professionally Yoshida embarked on a successful career where she captured the WBO super flyweight title in 2019 against American fighter Casey Morton. After losing to fellow Japanese Tomoko Okuda in December 2020 by a technical decision due to a cut, Yoshida regained the title by split decision in June 2021.

In her last fight Yoshida was dethroned by Tamao Ozawa in a split decision loss at Korakuen Hall in Tokyo.

Yoshida decided to pack her bags and with her daughter by her side seek fights in America and Europe. She recently signed a promotional contract with American promoter Lou DiBella of DiBella Entertainment.

It was a decision made after numerous visits to both California and New York. After her most recent visit, she met New York City based Lou DiBella and just recently signed a promotional agreement with DiBella Entertainment.

“She’s a wonderful person with a wonderful daughter,” said DiBella who has several other female prizefighters under his banner. “Miyo is very dedicated like all Japanese fighters.”

“There is true freedom with responsibility,” said Yoshida. “It’s exciting without worrying about the eyes around you. I can be my true self.”

Yoshida will be moving to New York and finally have her dream of fighting in America.

“I want to make a name for myself as a world champion in America,” said Yoshida.

Five-division world champion Naoko Fujioka has fought twice in America. In her first match in front of more than 10,000 fans at Banc of California Stadium in Los Angeles, she engaged in a furious fight against Sulem Urbina. She retained the WBA flyweight world title by majority decision.

In Fujioka’s second prize fight in America, a battle with WBC titlist Marlen Esparza in that fighter’s home state Texas did not go as well. Despite a fierce back-and-forth firefight for 10 rounds, none of the Texas judges gave Fujioka credit. Only Nevada judge Lisa Giampa had a credible scoring card after the scores were read. The two Texas judges gave every round to Esparza.

Fans and others were shocked.

“I thought Naoko won the fight,” said DiBella who was ringside for that fight card in San Antonio, Texas on April 9. “In my opinion she is a sure Hall of Famer.”

Though Fujioka was disappointed in the loss she was very content that fans applauded her effort. Later, she heard that DAZN announcers were upset at the two Texas judge’s score cards and loved her effort.

“Japanese women are very dedicated and fight hard to prove they belong,” said Yuriko Miyata, a Japanese boxing journalist now based in Los Angeles. “They just want a chance to show what they can do. They are very competitive.”

Yoshida and Fujioka are not the only Japanese champions. Many others are battling each other on a regular basis in Tokyo at the famous Korakuen Hall and other parts of Asia. They want to show the rest of the world what they can do.

“It took many years for Japanese women to be able to fight professionally,” said Miyata who has covered women’s boxing in Japan since its inception. “They are very eager to prove that Japanese boxing is very good.”

Golden Boy Promotions featured her twice in the past two years on American cards.

“Fighters from Japan are proud warriors,” said Golden Boy’s Roberto Diaz vice president and matchmaker. “They are proud and honorable in all sense of the word. In and out of the ring they are professionals. They make weight, do not bring drama and fight their ass off.”

Japanese boxing is on its way especially in the lower weight classes and they are anxious to show what they can do.