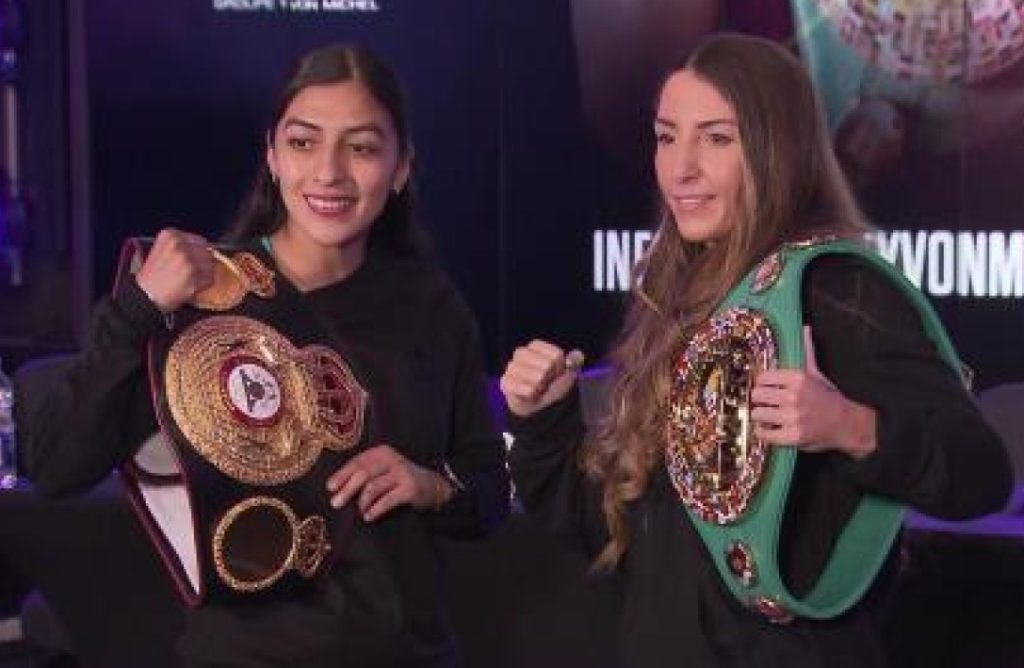 Group Yvon Michele announced that the world title defense by Kim Clavel against Jessica Nery Plata has been postponed due to health reasons. No further details have been announced. It was to be Clavel’s first title defense since winning it last summer

Costa Rica’s Yokasta Valle captured her third division world title with a brilliant display of maintaining distance against the taller hard-punching Evelin Bermudez. Her win for the IBF and WBO light flyweight world titles gave her wins in the atomweight and minimumweight divisions. That’s a pretty significant accomplishment.

Credit her new trainer Gloria Alvarado for devising the strategy to defeat Argentina’s Bermudez. Their work together since earlier this year continues to pay off for Valle who keeps adding more and more defensive skills to the repertoire.

Mega showdowns with the winner between Clavel-Nery Plata and perhaps Seniesa Estrada are strong possibilities. Other light flyweights are available. It’s one of the strongest divisions in women’s boxing.

As if to prove their dominance in the lower weight classes Japan presents an all-women fight card at the famous Korakuen Hall in Tokyo on Thursday Dec. 1. Although one bout includes lightweights, all of the other bouts are not above 122-pound super bantamweights.

Mizuki Harata (3-0) and Kanako Taniyama (5-1-1) contend for the vacant WBO super flyweight title despite both not having a total of 10 fights combined. Still, Japanese fighters are known for their competitive spirit and no-nonsense approach.

Interestingly, the former champion Miyo Yoshida recently signed with DiBella Entertainment and is in the process of moving to New York City. She held the title on two occasions. A third acquisition is more than possible.

Lou DiBella said he was immensely impressed with Johnson’s grit and determination in battling both a severe cut and defeating former world champion Susi Ramadan this past October on the Devin Haney-George Kambosas rematch.

“Cherneka Johnson has the whole package: looks, talent, and charisma,” said Lou DiBella, President of DiBella Entertainment. “You can’t tell by looking at her that she’s a blood-and-guts warrior; you can tell by watching her last fight, in which she successfully defended her IBF world title over 10 bloody rounds, despite being cut to the bone. Sugar Neekz makes great fights and can be a major boxing star.”

The third time was the charm for British fighters finally defeating Jamie Mitchell for the WBA bantamweight title as Nina Hughes pulled out the win to become the new world titlist.

Hughes, 40, did what two other British fighters were unable to accomplish in defeating Mitchell who beat Shannon Courtenay and Carly Skelly. Now she holds the bantamweight world title and could face either Mexico’s WBC titlist Yulihan Luna Avila or Denmark’s WBO titlist Dina Thorslund.

The bantamweight division has definitely heated up. Is there a round robin tournament possibility?

Also in England, Sandy Ryan defeated Anahi Sanchez in a super lightweight title clash on Saturday. It was the fourth consecutive contest against Argentine boxers. Is she ready for the big guns like Chantelle Cameron or the legendary Layla McCarter?

Yoselin Fernandez (12-3) won by knockout in the third round over Denis Montilla (0-2) on Sunday Nov. 27. The light flyweight match took place at Caracas.

Priscilla Peterle (6-0) won by decision after six rounds against Marija Zivkovic (1-10-1) on Saturday Nov. 26. The super welterweight fight was held at Amiens.

Mayumi Nakano (2-1) knocked out Kagishippo Sachi (2-1) in the third round on Monday Nov. 28. The atomweight fight took place at Tokyo.

Kirstie Ganaway (4-0-1) knocked out Panida Chatluang (4-5) in the first round on Thursday Nov. 24. The regional super flyweight title fight took place in Singapore.

Elizabeth Oshoba (3-0) won by knockout in the first round over Gabriella Mezei (11-32-5) on Saturday Nov. 26. The super bantamweight match took place at Swindon, England.