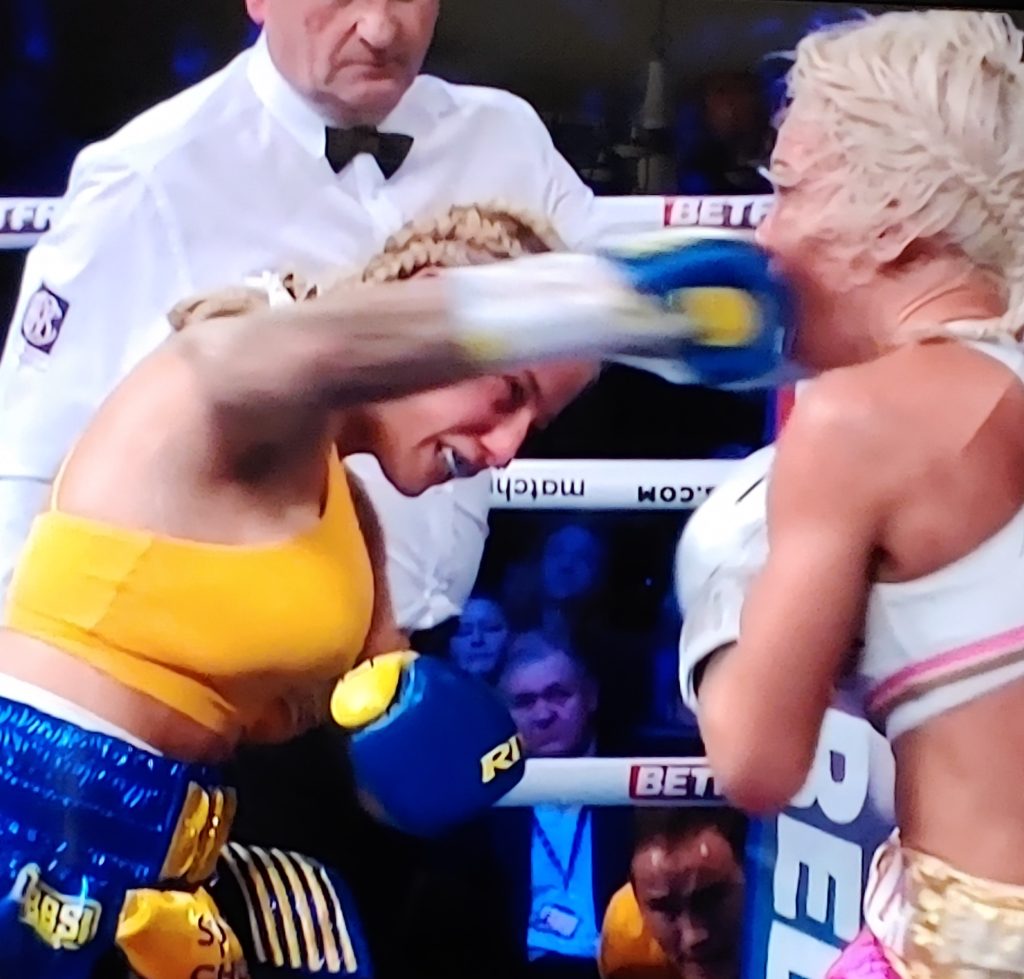 Ebanie Bridges Blasts Out Shannon O’Connell in Battle of Aussies

In the battle between Aussies, Ebanie Bridges survived a big hit from Shannon “Shotgun” O’Connell in the opening round and stopped the challenger by technical knockout late in the match to retain the IBF bantamweight title on Saturday.

It wasn’t even close.

Bridges (9-1, 4 Kos) showed off her strength and powered past O’Connell (23-7-1, 11 Kos) in front of the adopted town of Leeds, England to retain the IBF title. It was the first defense of the title that was heavily fueled by derisive words tossed via social media.

“Not bad for a skanky stripper,” said Bridges who adopted the slur by O’Connell as a war cry.

After months of acidic words tossed by O’Connell, who Bridges previously admired, the two Australian-based prizefighters met in the boxing ring to settle their differences and decide the world championship.

Bridges opened up the match behind jabs and moving forward when she was caught with one of O’Connell’s rocket rights. The champion stumbled briefly and then resumed the action. O’Connell landed a few more right hand bombs and had cleanly won the opening round.

It seemed the taller O’Connell would have a clear advantage with her height and hammer right cross but Bridges made adjustments.

O”Connell found the mark early in the second round but soon found Bridges moving in at a faster pace behind combination punching. A thudding left to the body seemed to affect O’Connell and Bridges also connected with overhand rights. The increase in pace seemed to both O’Connell.

Perhaps seeking to take back the fight, O’Connell tried to match Bridges activity but ran into a laser right cross to the chin. Down went the taller opponent, who looked dazed and confused by the blow. After the count Bridges connected again but O’Connell managed to stay upright and fight her way out of trouble.

If it had been three-minute rounds the fight might have been over.

From that point on Bridges was in complete control and though O’Connell was still focused she was unable to connect cleanly on the fast-moving champion. Bridges was in a groove and slipping under blows and countering with perfection.

Bridges nimbly varied her attack to the body and head and angled her way out of trouble. Inside she worked furiously, never stopping her attack. It was a withering pace that seemed to bother O’Connell who could not keep up. Also, Bridges natural strength seemed to surprise the taller O’Connell.

O’Connell had her best round in the sixth when she exchanged rights with Bridges. Both landed crunching blows simultaneously but the champion seemed unfazed and continued her attack. It was a bad omen for O’Connell.

Bridges was in control and kept advancing forward. A savage attack to the body seemed to affect O’Connell who looked swollen and bloodied and losing snap in her punches. The shorter Bridges was still fighting at a fast pace though she seemed to slow a little too. But her blows were still straight and strong.

In the eighth round Bridges opened up with a left hook and a strafing one-two combination. Then she battered O’Connell’s body with six punishing blows and connected with another right that snapped O’Connell’s head back. Referee Howard Foster did not hesitate and stopped the fight at 1:45 of the eighth round.

“I knew it was going to be the hardest fight in my career and it was,” said Bridges to DAZN. “I hope you know who the queen of Australia is now.”

Now it’s on to unification of the bantamweight title.

“I was very happy with my performance,” Bridges said. “Team skanky stripper forever.”