Another Look at Ebanie Bridges and More News
Written by: David A. Avila 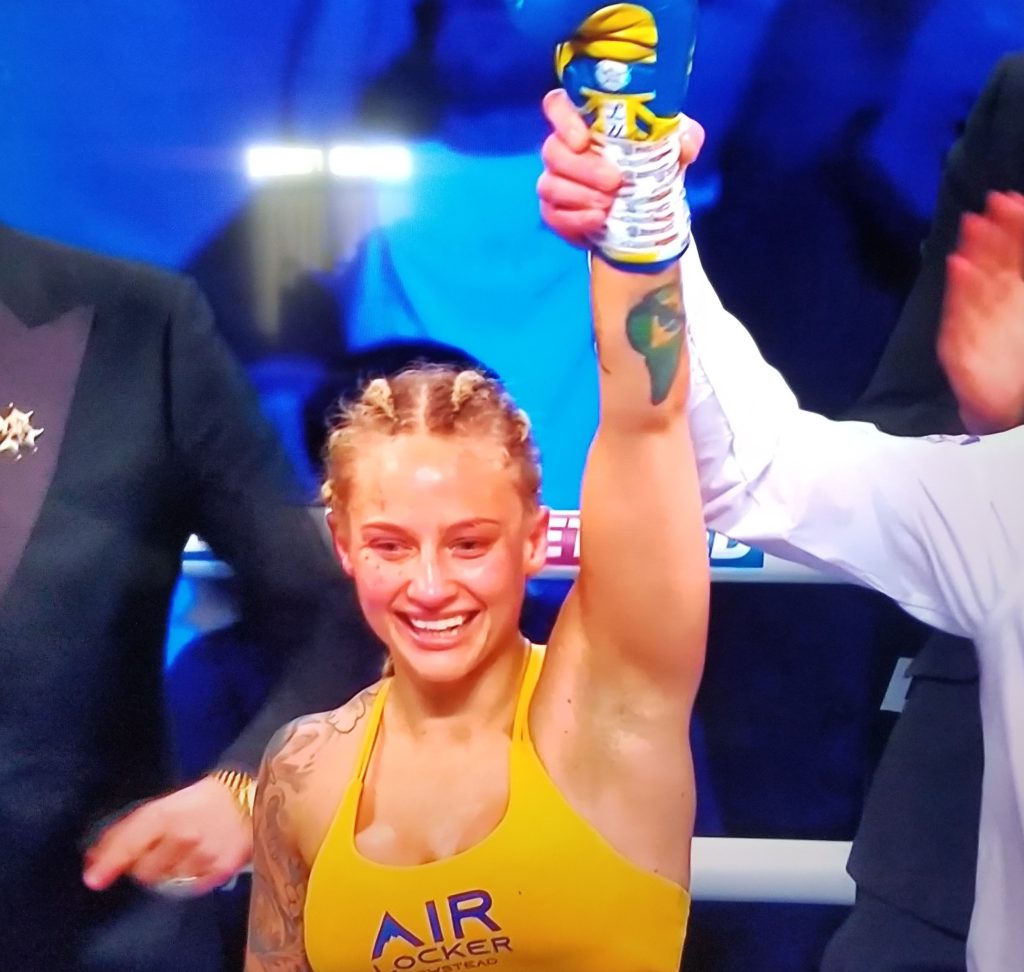 IBF bantamweight champion Ebanie “Blonde Bomber” Bridges’ win could lead to more exciting match ups in 2023 for 118-pounders. It’s one of the more loaded weight divisions in the sport.

Just across the channel in Denmark lives Dina Thorslund the WBO bantamweight titlist and in Mexico resides Yulihan Luna Avila the WBC titlist. And, in England, newly crowned Nina Hughes recently captured the WBA title. All four have different styles and make for a compelling quasi-tournament.

Immediately after Bridges win, the possibility of unification matches was brought up. Matchroom Boxing’s promoter Eddie Hearn was quick to address the question.

“She can really fight,” said Hearn. “I really feel she deserves to be undisputed. She deserves the credit.”

Bridges journey toward substantiation of her skills and determination have created a mega fight scenario that could sell out arenas in Australia, Mexico, Denmark or England. She has created that kind of selling power. She is the straw the stirs the drink.

The fiery Aussie has also opened up the door to other fighters from her country like Skye Nicolson who has immediately captured interest too. Like Bridges, she has that mixture of looks and skill that fans cannot ignore.

Hearn is smart enough to spot it.

Hopefully, Matchroom Boxing can arrange unification bouts in a single show where fans can see the different champions clash all at once.

Looking back at the fight last Saturday, once again Bridges dispelled any notion that her success has been the result of luck. Her self-described “Mexican style” of fighting mowed down the challenge of veteran Shannon O’Connell.

“The key to my victory was that I was better all around. I put all that hatred in my back pocket and I saved it. Because I’m not going to waste all that energy being angry,” said Bridges. “I told my team lets go and break hearts and take her friggin soul.”

It was a complete victory.

“Another key to my victory is that I’m just a real student of the sport. Even though I’m less experienced I have a lot more experience and knowledge and IQ than Shannon had,” Bridges added. “I was smarter and had a better corner. I knew I had the right tactics.”

As for any future unification bouts with the other bantamweight champions.

“I think the other bantamweight champions are great. They are better than Shannon. I think they are good, but I think I am better,” said Bridges. “I will be undisputed, but they are all going to be good fights.”

Braekhus, 41, last fought in March 2021, almost two years ago, when she was defeated by Jessica McCaskill a second time in Dallas, Texas. She will be fighting Portillo who has fought mostly in the lightweight division.

It will be interesting to see if Braekhus has retained any of her considerable fighting skills.

Problems arose in South Africa for a boxing card that was going to feature Maricela Cornejo versus Mapule Ngubane for a regional middleweight title. The Sunday fight card was postponed and no date has been settled. Meanwhile, the fighters and those involved are waiting in that country for a firm date.

Nancy Rodriguez, who advises Cornejo, has been reporting on the business matter including the serious problem of fighters trying to maintain proper weight.

Stevie Morgan (5-0) knocked out Diana Cotrino (0-4) in the fourth round on Saturday Dec. 10. The lightweight bout took place at Medellin. Also, Simona Sarpa (1-1) knocked out Sasthy Ramirez (0-2) in round one of a super flyweight bout; and super middleweight Yelianyi Fernandez (1-0) beat Daylin Mata (0-1).

Tina Rupprecht (12-0-1) won by unanimous decision after 10 rounds versus Rocio Gaspar (12-2) on Saturday Dec. 10. The WBC minimumweight title fight was held at Heilbronn. It was her fourth title defense.

Edda Essaoudi (4-0-1) and Klaudia Vigh (3-39-2) fought to a draw after four rounds on Saturday Dec. 10. The featherweight bout took place at Dorsten.

Chihiro Takagi (1-0-1) beat Megaton Marina (0-1-1) by decision after four rounds on Sunday Dec. 11. The bantamweight fight was held at Kariya.

Noa Sakamoto (3-0) won by decision after four rounds against Arika Shimono (0-3) on Sunday Dec. 11. The atomweight fight was held in Osaka.

Angelina Lukas (3-0) won by technical knockout over Lulu Kayage (8-9-4) in the second round on Sunday Dec. 11. The super flyweight regional title fight took place at Almaty.

Eveling Ortega (5-4) was the winner by decision after four rounds versus Susana Panameno (2-1) on Friday Dec. 9. The light flyweight bout took place at Managua.

Ellen Simwaka (12-5-2) knocked out Asandiswa Nxokwana (7-5-2) in the second round on Friday Dec. 9. The bantamweight fight was held at Johannesburg.

Viviana Ruiz (6-1) knocked out Phanit Yongyut (1-1) in the second round on Sunday Dec. 11. The flyweight match was held at Pathum Thani. Other results: Pattawaran Thaosuwan (6-1) knocked out Kirada Saksitsakul (0-2) in two rounds of a super bantamweight fight; Arisara Wisetwongsa knocked out Ratchanee Boonme (0-1) in the third of a flyweight bout; and light flyweight Pimchanok Thepjanda (2-1) beat Saengdaw Charam (0-2) by decision.

Nillada Meekoon (5-0) knocked out Yunko Su (0-1) in the third round on Wednesday Dec. 7. The light flyweight bout took place at Bang Phli.

Ellie Hellewell (1-0) won by decision after six rounds versus Beccy Ferguson (2-9) on Sunday Dec. 11. The lightweight bout took place at Rotherham, England. Also, Jade Grierson (1-0) beat Ester Konecna (2-20-1) by knockout in the second round of a super welterweight fight.

Ebanie Bridges (9-1) won by knockout in the eighth round over Shannon O’Connell (23-7-1) on Saturday Dec. 10. The IBF bantamweight title match was held in Leeds, England. Also, Shannon Courtenay (8-2) beat Gemma Ruegg (5-6) by decision after eight rounds in a featherweight bout; and lightweight Rhiannon Dixon (7-0) beat Kristine Shergold (7-7-1) by decision after eight rounds.

Kalliopi Kourouni (12-3-1) and Calista Silgado (21-16-4) fought to a draw after 10 rounds on Sunday Dec. 11. The super featherweight regional title match was held in Orlando, Florida.