The Return of Cecilia Braekhus and More Fight News
Written by: David A. Avila 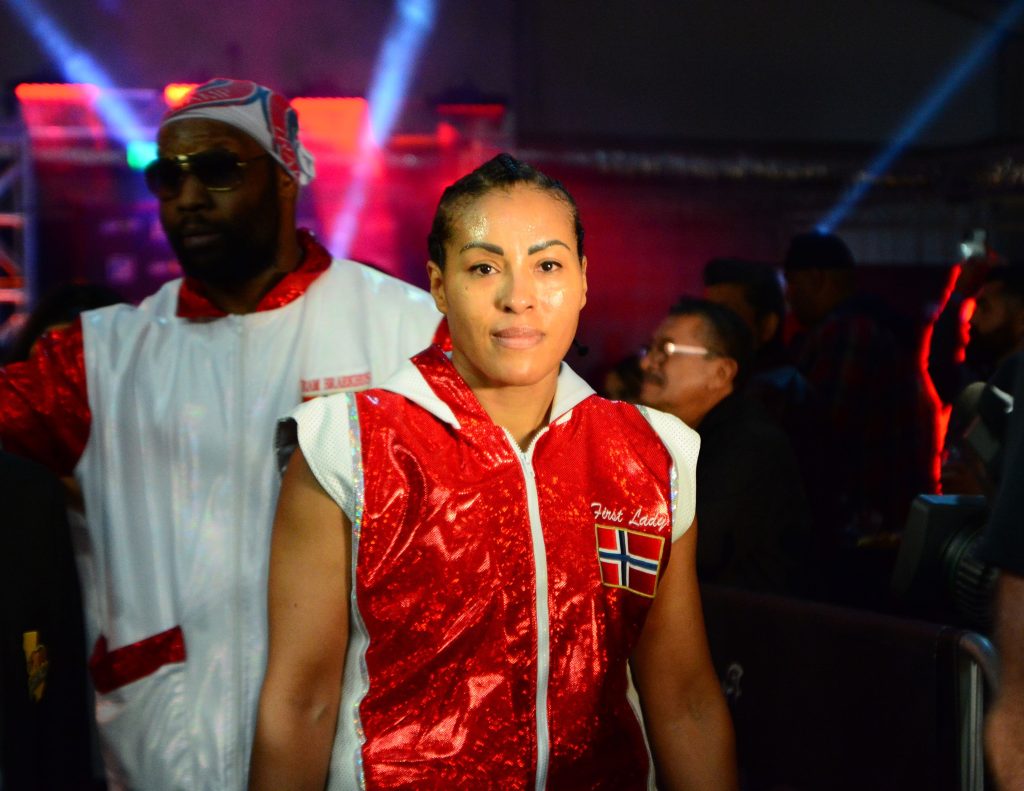 After 21 months away from the prize ring Cecilia Braekhus, the Norwegian queen of boxing, returned to reclaim her former sizzle and status as one of the best female fighters in the world.

It started in Commerce, California of all places.

Braekhus has been training in Southern California with Johnathan Banks, who also works with Gennady “GGG” Golovkin in Santa Monica, California. Both fighters for years were among the top fighters pound for pound in the world. Some would argue they still are among the elite.

Last Saturday, a crowd of more than 1,000 eager fans at Commerce Casino saw Braekhus step on the boxing platform to engage Argentina’s Marisa Portillo in a six-round super welterweight fight. It was a higher weight class for both.

At first, the former undisputed welterweight world champion known as “the First Lady” seemed lost in a fog. The punches seemed to be hesitantly thrown and the reflexes were rubbery for the first two rounds. The fighter that was once considered the best fighter pound for pound still maintained the physical appearance, but in terms of execution, not even close to her former best.

“My timing was off,” said Braekhus, 41. “The first two rounds were weird.”

Suddenly the zip in Braekhus punches appeared and the aggressiveness as well. The former world champion who dominated the welterweight division for many years re-appeared. From rounds three until six the Norwegian boxing queen began gaining more and more confidence with a snap in her punches and a steady flow of work emanated much like a log-cutting machine.

Braekhus chopped down the willing Portillo to win by unanimous decision 60-54 on all three scorecards. She apprehensively approached reporters to discuss her work.

First, another rust shaking fight is in order she said. Then the hunt for championship belts proceeds.

“I’m so glad to be back,” Braekhus said.

“Ooh wa, ooh wa, coo coo kitty, talk about the girl in New York City.” That’s a riff from an old song from the 60s by the Ad Libs called “Boy from New York City.” I changed the lyrics a little to announce that Sulem Urbina will be fighting in Manhattan.

Urbina (13-2-1) and Indeya Smith (5-6-2) meet eight rounds at Sony Hall in New York City on Wednesday Dec. 21. DiBella Entertainment will be staging the Boxing Insider Promotions fight card that will be streamed on YouTube.com.

“I’m looking forward to coming to New York, as it has been a dream of mine to fight there,” said Urbina. “Indeya Smith is a good fighter. She’s fought great opposition and she’s rugged. I just know I am there to win and this will be my Christmas present.”

Mexican born Urbina lives and trains in Phoenix, Arizona and will be fighting for the first time in New York. Twice she’s battled for world titles against Marlen Esparza and Naoko Fujioka in the flyweight division and lost spirited battles. Now she will be moving up to the super flyweight division.

Next week we will be announcing the various candidates for Fights of the Year and other boxing-related categories on this site.

This past year has been tremendous with many of the best competing against each other. That’s rare in men’s boxing. Many of the top women such as Claressa Shields, Katie Taylor, Chantelle Cameron and Amanda Serrano willingly battled each other.

Women’s boxing also saw several newcomers enter the forefront of the prizefighting world with performances that sizzled and made them stand out. Be sure to visit our site or read our articles next week and in 2023. It will be our seventh consecutive year in publication. We started ThePrizefighters.com in January 2016. Our brother web site is TheSweetScience.com and that site began around 2005.

Christina Poeppelmeyer (3-0) won by unanimous decision after four rounds versus Dunja Bocan (0-1) on Saturday Dec. 17. The lightweight fight was held in Vienna.

Carol Tobon (0-0-1) and Vanessa Estrada (0-0-1) fought to a draw after four rounds on Saturday Dec. 17. The super flyweight match was held at Santa Marta.

Destiny Day Owens (3-0) knocked out Luiza Meza (0-7-1) in the first round on Thursday Dec. 15. The super lightweight fight took place at Santa Marta.

Aminda Zidani (4-0) was victorious by unanimous decision after 10 rounds against Nina Pavlovic (7-5-1) on Saturday Dec. 17. The super featherweight regional title match was held at Le Havre.

Atomweights Natsuki Tarui (4-10-2) and Minayo Kei (7-5) fought to a majority draw after six rounds on Sunday Dec. 18. The match was held in Osaka.

Czarina McCoy (11-1) won by unanimous decision after 10 rounds versus Monica Henao (5-3-5) on Saturday Dec. 17. The regional super lightweight title fight was held in Colima. McCoy fights out of Las Vegas and Henao is from Panama.

Super featherweights Magali Rodriguez (21-6-3) and Karla Ramos (9-9-1) fought to a draw after eight rounds on Saturday Dec. 17. The match was held in Juarez.

Teresa Almengor (9-1-2) won by unanimous decision over Yacksury Gordon (3-6-2) after six rounds on Saturday Dec. 17. The featherweight fight was held at Panama City.

Anais Kistler (2-1) knocked out Kosovjona Osmanaj (0-2) in the fourth round on Thursday Dec. 15. The welterweight contest took place at Geneva.

Oksana Bondarenko (2-0) won by knockout in the third round over Anastasia Mohylna (0-2) on Saturday Dec. 17. The featherweight bout was held in Odessa.

Caroline Dubois (5-0) won by knockout over Sofia Rodriguez (5-8) in the first round on Saturday Dec. 17. The super lightweight fight took place at Bournemouth, England.

Emma Suarez (7-5) won by technical knockout over Winnymar Lopez (0-5) on Friday Dec. 16. The super bantamweight fight was held at Caracas. Also, light flyweight Luisa Bello (1-6-1) knocked out Eylin Ribero (0-1) in the fourth round.