Fighter of the Year 2022: Alycia Baumgardner
Written by: David A. Avila 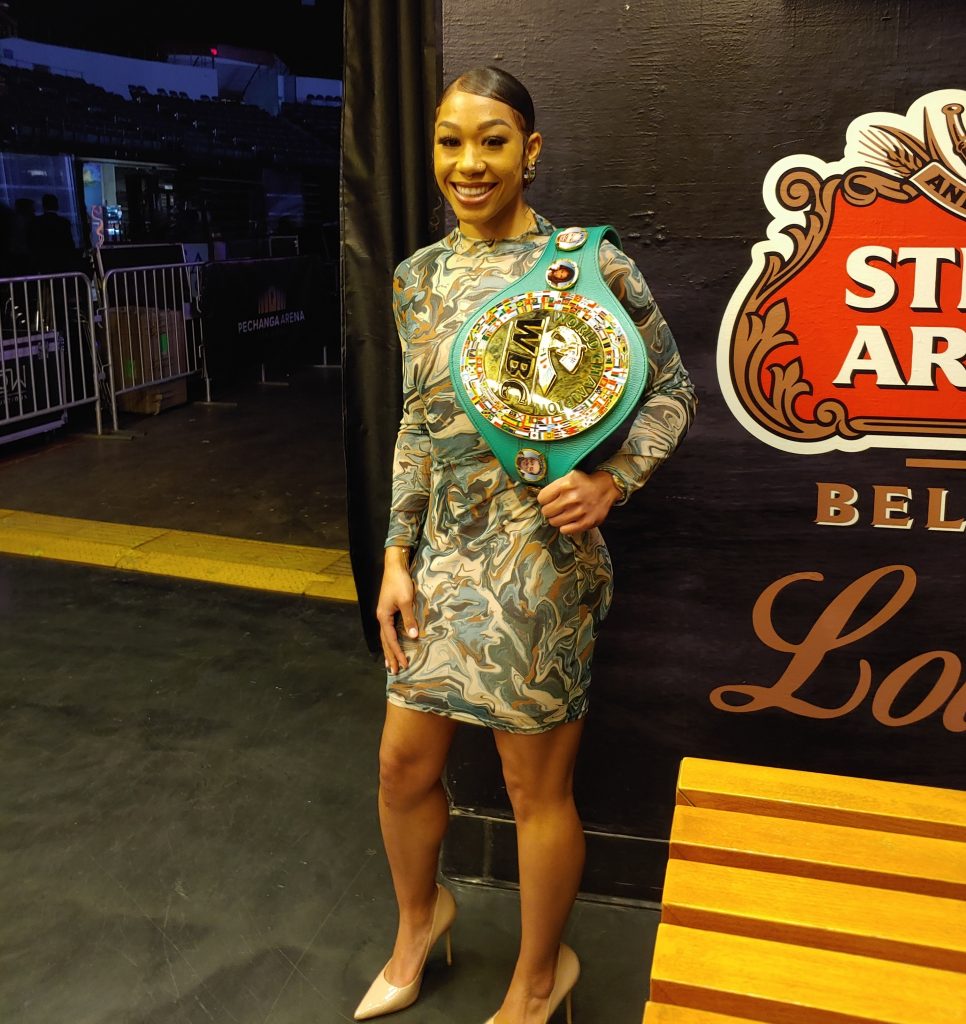 Alycia Baumgardner is Fighter of the Year 2022, Plus Other Awards and News.

Every year it gets more difficult to choose the fighter whose performance outdoes all others over a 12-month period. And this year was even more difficult with many world titlists eager to battle each other to claim superiority.

Alycia “The Bomb” Baumgardner is the 2022 Fighter of the Year.

Of all the great fights that took place this year, Baumgardner proved to have the stiffest contest and emerged victorious by split decision over Mikaela Mayer. For that victory and another earlier in the year she was voted the Fighter of the Year Award by thePrizefighters.com.

The model-looking Baumgardner was relatively unknown two years ago until the Detroit-based fighter agreed to face then champion Terri Harper of England. Though a hefty underdog, Baumgardner traveled to Sheffield, England and promptly knocked out Harper in the fourth round to grab the WBC and IBO super featherweight titles in 2021.

It caught much of the boxing world by surprise.

“Boxing was my dream so there was no quit in me,” said Baumgardner. “I knew I was destined for something great. And being patient was going to be critical in my journey. I stayed in the gym everyday waiting for that call to fight for the title.”

Behind a strong counter-punching style, Baumgardner retained the titles against former champion Edith Matthysse last April and then agreed to meet fellow American and WBO and IBF titlist Mikaela Mayer. It was a match that needed little hype considering the verbal battles they exchanged on social media the previous two years.

Of all the major rivalries and match ups that took place in 2022 between champions, Baumgardner and Mayer was the most difficult to predict a winner.

Both champions have their strengths and few weaknesses. Mayer has the extensive amateur background including the 2016 Rio Olympics. Baumgardner has the wrestling background and powerful punching based on balance.

“Wrestling helps with balance which is key in the boxing ring,” Baumgardner says.

On Saturday Oct. 15, at London, England, the shorter but visibly stronger looking Baumgardner jumped in front on the score cards with her compact counter-punching style. With the right cross cocked at all times, she made Mayer apprehensive for the first two rounds. Then, a change took place as Mayer unleashed her combination punching.

Back and forth the two champions exchanged violence. Each fighter adapted and changed tactics when necessary. By the end of the ninth round it was apparent that it was anyone’s fight and only a knockout or knockdown could guarantee the winner. But neither fighter went down. One judge saw Mayer the winner, but two others proclaimed Baumgardner the winner and now she holds the WBC, IBO, IBF and WBO super featherweight titles. Most boxing publications rank her among the top fighters pound for pound in the world.

“Being included is something I imagined for myself,” said Baumgardner who is slated to fight for the WBA title early in 2023. “Staying active is a benefit for me, because it allows me to be the best fighter and keep showcasing why I belong.”

Thinking back several years ago when injuries and a lone loss seemed to block her path to championship fights, Baumgardner credits her family for supporting her lifestyle.

“My family has been my biggest supporters even when I was doing club shows. They witnessed my sacrifices and hard work,” said Baumgardner who grew up in Ohio. “They love being part of something so special.”

“My life is always changing. Adapting,” said Baumgardner. “Becoming world champions was just a small fraction. I believe there is so much more to achieve. That being humble and being my authentic self will always be key.”

Fight of the Year – Katie Taylor versus Amanda Serrano.

In my 37 years of covering the boxing beat I can honestly say the meeting between Amanda Serrano and Katie Taylor at Madison Square Garden in New York City ranks as the best I’ve ever experienced. Not only does it rank as the 2022 Fight of the Year for women’s boxing, but for any fight regardless of sex.

It was truly the Fight of the Year period. No need to specify gender.

The battle between Ireland’s Taylor and Puerto Rico’s Serrano somehow exceeded expectations and provided nonstop action for 10 two-minute rounds. The only drawback was three-minute rounds would have truly stamped it as one of the top fights of all-time.

Taylor and Serrano electrified the crowd and media with high level skills and intensity that equaled any of the great matchups of the past. In my career I’ve witnessed Lennox Lewis versus Evander Holyfield, Oscar De La Hoya versus Felix Trinidad; Floyd Mayweather versus Manny Pacquiao and none of these can match the overall drama and performance of Serrano and Taylor. It was a fight for the ages.

England’s Marshall connected with a left hook to Herman’s chin in the third round of their middleweight title fight and that ended the fight. Marshall proved that she packs one-punch power and is one of the few women that possess a good left hook.

Mucino defeated Argentina’s Leonela Yudica to win the IBF flyweight world title. She had formerly held the IBF, WBA, WBC and WBO flyweight title before and had last held a world title in 2019. Hard times ensued such as injuries, the pandemic and the loss of her father/trainer. She was forced to relinquish the WBO flyweight title and finally returned to the top with a brutal and bloody battle to win by split decision last October in San Diego. It was a remarkable comeback for Mucino.

Bridges has a knack for attracting audiences everywhere she goes. But when she steps in the prize ring the fighter known as the “Blonde Bomber” continues to impress with her ever-growing assortment of fighting skills. Her knockout win over fellow Aussie Shannon O’Connell was one of the more exciting showdowns of the year.

Runner up – America’s Mikaela Mayer can talk the talk and walk the walk.

Hughes, 40, entered the ring unknown to the international fight crowd and convincingly defeated Mitchell who was making her second defense of the WBA bantamweight title. Few expected Hughes to win.

After waiting for her turn five years as the number one ranked light flyweight, Enriquez realized she would never get an opportunity to fight for the world title at that weight, so she moved up to flyweight. Still, she gets no offers. Shame on all the sanctioning organizations.

Runner up – Denmark’s Dina Thorslund has the WBO bantamweight title, yet no one clamors to fight the blonde flamethrower.

Lucrecia Manzur (8-1) knocked out Elizabeth Britos (1-17-1) in the second round on Saturday Dec. 24. The featherweight match was held at Famailla.

Amy Naert (8-1) won by knockout in the second round over Tetiana Perevezentseva (0-5) on Sunday Dec. 25. The flyweight fight took place at West-Vlaanderen.

Amanda Galle (7-0-1) defeated Luz Martinez (6-5) by knockout in the second round on Sunday Dec. 18. The super bantamweight bout took place at Toronto.

Angie Rocha (13-3-3) defeated Indira Perez (7-9-2) by unanimous decision after eight rounds on Thursday Dec. 22. The super middleweight bout took place at Santa Marta. Also, Yolis Marrugo (30-12-4) knocked out Yoleima Blanco (0-11) in the second round of a featherweight fight; and super lightweight Destiny Day Owens (4-0) knocked out Katerin Tobon (0-1-1) in the first round.