Cecilia Braekhus vs. Inna Sagaydakovskaya
Written by: David A. Avila 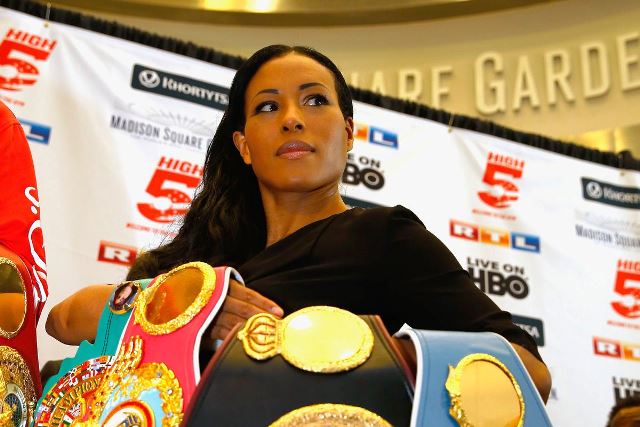 In what might be considered uncomfortable for others is nonchalant for the welterweight champion Cecilia Braekhus.

Having to travel and accommodate being in unfamiliar territory in not only another country but all new settings around you, can take a toll on a particular person who doesn’t have a completely settled mindset.

“Im used to traveling and moving with the flow,” explains Braekhus, “You learn to take what you have and make the best of it.”

The Norway native made the first breakthrough for women boxing as one of the first females to be televised on HBO in its history of 45 years covering boxing. Alongside contender Kali Reis, both women paved a new way for women boxers in the sport. Still, Braekhus remains unbeaten in the welterweight division and currently one of only four boxers who hold four- world title belts simultaneously.

Since her victory win over Reis back in May, “First Lady” Braekhus (33-0, 9 KO) is now looking forward to a new challenge against Russian pugilist Inna “Ice Queen” Sagaydakovskaya (7-0, 2 KO) this Saturday, July 21 in Moscow, Russia.

Sagaydakovskaya, 33, had a long amateur career and just recently became a professional in 2016. Since her debut she remains undefeated and has two credible victories over Jennifer Retzke and Maria Lindberg.

The two women are competing in a 10-round welterweight bout on the undercard of cruiserweights, Murat Gassiev vs Oleksandr Usyk. The bout can be viewed on the ITV box office or through Sky Box, also, live streamed at TVplayer.com.

Although faced with some challenges from her previous camp, this camp she says, “feels different. Calmer and more balanced”. Having this mindset is not only essential as an athlete but dangerous for anyone who stands in the way of the champion boxer.

Explaining her counterpart for this upcoming bout, “She’s a tough Russian. She’s strong, and likes to throw her hands and go forward,” says Braekhus.

However, the energy flow throughout Braekhus reigns confidence in every area, “Technically, I am better. The better boxer, smarter and a brawler.”  The assurance in her faith of self is captivating, as she’s considered one of the most accomplished female boxers in the sport today.

“I am having so much fun, right now. There’s nothing to prove, I’m enjoying myself”, says Braekhus.

Not to skip over the upcoming fight this Saturday, but there have been some talks of Braekhus to battle the current GBU and WIBF world welterweight title holder, Layla “Amazing” McCarter who has not lot a fight since 2007 when Braekhus began her pro career. However, “it’s only a matter of negotiation. I don’t talk bad about other fighters. It’s not my style,” says the classy Norwegian.

There’s nothing new in knowing that it’s been a challenge for females in the sport of boxing. But, with the recent breakthrough, boxing fans are starting to take notice. There are many female fighters coming up in the sport who are striving for what’s out there and could be Braekhus’ next challenger.

Intriguing enough, Braekhus is still unmoved, yet highly motivated for the future in women boxing. “There are a lot of young and hungry competition with boxing. Even some in another sports are wanting to fight such as Cris Cyborg” she’s says with much anticipation and excitement.

Cyborg, who currently competes in the UFC, has made mention to want to fight the best and that’s Braekhaus. With no hesitation at all Braekhus is highly interested in taking on this possible opponent in the near future.

Still, belief in herself and staying centered with her mindset is the most powerful tool she has that will drive Braekhus with complete success through any potential threat she is faced with in the future.