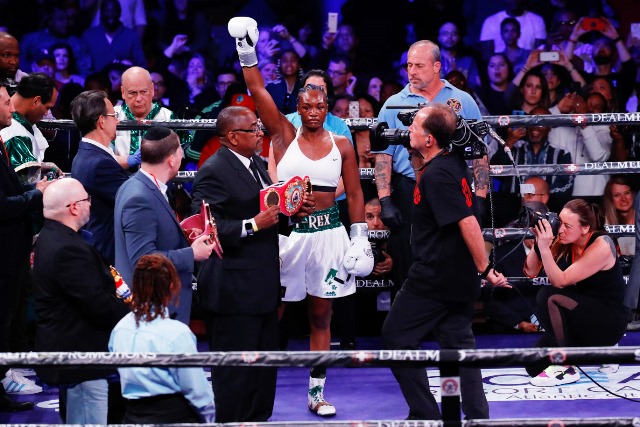 Behind a sterling defense Claressa Shields showed the boxing world that she is indeed the undisputed middleweight world champion of the world by handing Germany’s Christina Hammer her first pro defeat on Saturday.

It was an undisputed win.

In female boxing’s biggest fight in history Shields (9-0, 2 KOs) defeated Hammer (24-1, 11 KOs) at Boardwalk Hall in Atlantic City. She now has the WBO, WBA, WBC and IBF middleweight titles and is only the second female to attain undisputed championship status.

Though many lauded Shield’s obvious athletic talent some wondered if she could handle a true professional like Hammer, who had never been defeated in 10 years. What many did not consider was her underestimated defensive skills that were brilliantly displayed to those in the arena and those watching around the world.

Hammer opened the first round looking to establish dominance behind her strong left jab. Almost all of her previous victories were attained behind that ramrod punch. Though she didn’t land it much in the first round, it did seem to give Shields something to think about. But the two-time Olympic gold medalist was still able to connect with a strong left hook counter and right cross.

“Her jab was off the chain,” said Shields of the German’s jab. “She can fight.”

The opening round was simply a taste test as Shields shifted into a quicker tempo and unraveled her own triple jabs in the second frame. Hammer backed off a bit to try and reconfigure her next move. Shields moved in and connected with back-to-back one-two combinations.

A more confident Shields looked eager to get back to work as she calmly moved into range with Hammer in the next two rounds. After resuming her effective one-two combinations, she then connected with a double left hook. Hammer was unable to counter with anything effective and Shields slipped most of the German fighter’s attacks including the jab.

“I couldn’t use my jab in the fight,” said Hammer about Shields elusiveness. “She’s fast and comes forward.”

Hammer opened up the fifth round more aggressively and exchanged combinations with Shields. But the American fighter connected with a three-punch combination to end the closely contested fifth round.

A look of concern crossed over Hammer’s face in between rounds. Her corner advised her to stay calm and use her right cross more. It was good advice but landing a big blow was another obstacle against the slick defense of Shields. During an exchange Hammer did connect and was countered by left hooks from Shields.

In Shields corner trainer John David Jackson confirmed that she was performing as planned and to maintain the pace.

Hammer landed the first significant punch in the seventh round and followed it up with some more rights. Shields waited until the second half of the round to unload a three-punch combination and then finished with a perfect right cross and left hook to punctuate the round. Hammer seemed stunned.

The next round would be worse for Hammer.

Shields must have recognized that Hammer was hurt. She quickly moved in with a blazing four-punch combination and Hammer covered up. Two left hooks stunned Hammer who looked in trouble but tried to fight her way out. She as met with a counter right cross by Shields and was bloodied. For a moment it looked like the referee would stop the fight, but luckily she let it proceed. Still, Hammer was nearly stopped on her feet and it was clear Shields was superior. Two judges gave Shields a 10-8 round and rightly so.

Despite the lopsided advantage by Shields, the German fighter remained steadfast and determined but all the time knowing the American fighter was looking to end it with a big blow. Hammer survived double left hooks and one-two combinations and then connected with a strong one-two combination. But Shields kept the pressure on in the ninth.

“I thought I finished her in round eight.  I thought the fight should have been stopped.  She was holding onto me.  I just told myself, stay cool, stay cool.  I was trying to get the perfect punch to get her out of there,” said Shields.

You could see in Shields eyes that victory was near but she was hungry for a knockout. Instead of wild flurries the Michigan native was composed and determined to find the right opening to close the show. A right cross and left hook landed and another counter shot connected for Shields. Hammer did land a one-two combination but wasn’t nearly enough to win the round or win the fight.

After 10 rounds the judges scored the fight 98-91 twice and 98-92 all for Shields who was ecstatic after hearing the decision.

“I am the greatest woman of all time. I did it,” said Shields with glee in her eyes. “I swear I feel like I’m dreaming right now.”

“I didn’t fight very good or fast,” Hammer said. “I wanted this fight. Respect to her.”

After a mere three years since her last Olympic conquest in 2016, the supremely confident Shields has stepped into lofty territory that only Norway’s Cecilia Braekhus has accomplished in becoming undisputed world champion.

“Right now I’m the undisputed champ,” Shields said. “Give me Cecilia Braekhus at 154.”

Braekhus currently holds all the welterweight world titles at 147 pounds.

No time to wait as far as Shields is concerned.

“Women’s boxing, we’re on fire,” said Shields. “I cannot wait to see the next super fight.”

Saturday’s fight could be the one that launched a thousand fights.

Carabajal recently fought former WBO lightweight world titlist Rose Volante two years ago and lost by majority decision. On this occasion Carabajal proved too experienced for Gradinar. The judges saw it 97-93 twice and 96-94 for Carabajal.

The actual IBF champion is Jennifer Han who is on maternity leave.