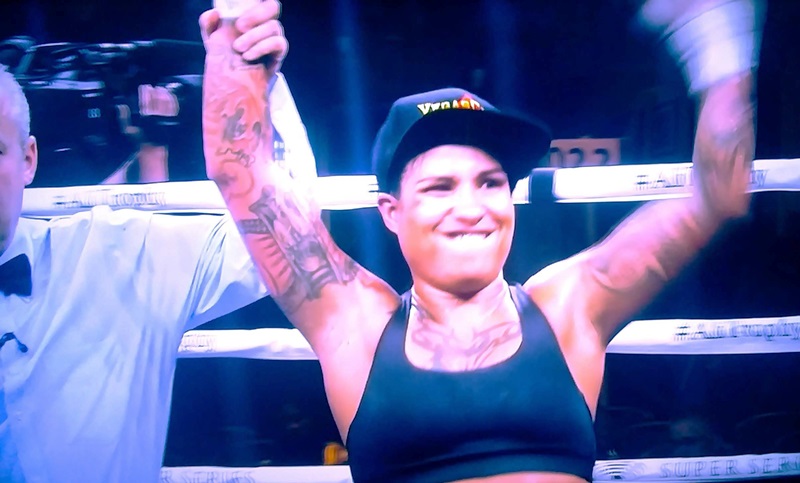 A subject that has been mentioned nearly ad nauseum is the fact female boxing is currently enjoying a renaissance of unprecedented heights.  Average purses are at the highest they have ever been, although still not at par with men’s, and the exposure women’s prizefighting is receiving is at an all-time high.

One person, Melissa Hernandez, 40, remembers the previous highs but as well as the lows.

Hernandez (23-7-3, 7 KOs) was scheduled to face Olympian Mikaela Mayer (12-0, 5KO) on Tuesday, March 17th, at the glorious Madison Square Garden in New York City.  The scheduled 10-round affair was canceled due to the pandemic Corona Virus spread. But we are sure there will be a new date release by Top Rank soon.

For those that don’t know and there shouldn’t be many, Hernandez is a no-nonsense throwback fighter who made her bones from the mid-00s until her first retirement in 2016.  During a 10-year pro run Hernandez fought everybody.

From her fourth fight against the then highly-touted Kelsey Jeffries to Chevelle Hallback and Layla McCarter four times and everybody in-between.  She captured the vacant Women’s International Boxing Association super bantamweight title against Lisa Brown in 2006 and the GBU lightweight strap a year later against McCarter in her only win against her in those four fights.

She challenged twice for one of the more established titles, in late 2011 against Erica Farias for the WBC lightweight strap and again in 2013 against Jelena Mrdjenovich for the featherweight version coming up short both times in enemy territory.

In 2016 she decided to hang them up after her fourth and final fight, until now, against Layla McCarter.

“The last fight I had with Layla McCarter, halfway through the fight, I didn’t want to be there anymore,” Hernandez said in an exclusive interview with the all-female boxing podcast, the 2MinRound.  “I got bored.  That is me being 100% honest.  I am in an actual fight, Layla McCarter is one hell of a fighter and I was bored, I didn’t want to do this.”

“Right afterwards when she and I went to see the doctor together I told her I was done,” she said.  “She didn’t believe me.  I fought like shit, I was bored and I am done.  Plus women were getting paid crap.  I am letting all out there and I am getting what? Five thousand, four thousand, that wasn’t worth it.”

Interestingly a catalyst for her making a comeback was none other than two-time Olympic gold medalist and current unified 154-pound champion Claressa Shields.

“I was talking my smack to Claressa Shields on social media and I was like, ‘if you think you are all that, we should spar, I know you are in Florida.’” Hernandez explained with a laugh.  “She hit me back, I go up there, we spar, she gives me a run for my damn money.  We sparred a couple of more times and it was that sparring that told me I could go back to this.”

“She told me, ‘you still got it, you should fight.’   Fast forward two or three months and I called her and told her I was back and she was happy,” she stated.  “I have to tip my hat to her a little bit.  That worked, once again it showed that I don’t care who I am in there with sparring or fighting, regardless I love the sport.”

It was never Hernandez’s intention to become a professional boxer; in fact, she doesn’t remember a time she was interested in the sport before she began to practice it.  “It definitely came by accident. I wasn’t the kind of person that would get hyped watching a Rocky film, I never really cared for it, I didn’t really watch boxing.  I went into a PAL gym in the Bronx.  I started training and then the Golden Gloves came around and you know New York is crazy for the Golden Gloves.  That’s what started it all.”

Despite not having an extensive amateur career, Hernandez feels it was intense enough to get her ready for the pros.

“I only had 18 amateur fights but I was fighting amateur champions especially fighting in New York.  New York City’s Golden Gloves do not play games,” she remembers.  “We are a three-month tournament.  I was fighting at 138 and 132 pounds in the amateurs.”

“In my first Golden Gloves I fought Jill Emory who already had been five-time amateur world champion,” she continued.  “I fought in the (Madison Square) Garden.  It was very, very surreal.  I took the L but I gave her a standing eight-count, it was great.  The crowd fell in love with me and that is when I fell in love with boxing as well.”

“I came up at that time when you would call the old-timers, the greats, were at their end and there was nobody coming up,” she said.  “We didn’t have the Olympics.  In the amateurs there wasn’t any open or novice.  That is one thing the girls get lucky about now.  Now they can get a novice class and get a couple of fights before they can go open.  I was thrown into the wolves from the beginning.”

Despite being brought in as the opponent, Hernandez turned out to be much more than a wolf against then undefeated Selina Barrios in April of last year in Louisiana.  “I have to 100% honest with this, I didn’t know who she was.  I know that sounds horrible but I didn’t know who she was.  I just saw that she had a 5-0 record.  What are you supposed to do with somebody 5-0?  I didn’t notice how big she was until I got to the venue.  Everybody was surrounding her, she had a lot of people, and then I was, ‘oh, ok.  I get what this is.’ “

“They brought in the old lioness to try to see what is up,” she remembered.  “The funny thing about it, I watched two of her fights and I psyched myself out.  I thought this girl is a go-getter; it is going to be a hard night for me.  Half way through the first round I noticed she couldn’t keep up with me.  I just have to keep moving.  I am not saying the girl is not good, the girl is good.  There is just levels to this and with five professional fights you are not on this level.”

Now in her next fight Hernandez is hoping to show another up and coming highly touted fighter Mikaela Mayer that there is levels in boxing and she is the gatekeeper.

“I am going to show her there is levels to this, I think she is a good fighter, I am not taking anything away from her,” Hernandez said confidently.  “You have to be in there with somebody before you make judgments.  I can say anything from watching her videos.  Same thing they can say about me.  She does this, that and a third until I am standing in front of you seeing that it is not that easy to hit me.  With her I just have to stay focus.  She has one hell of youth and reach on me.  I just have to be smart, it is kind of like fighting Jelena Mrdjenovich again.”

Like with Barrios, Hernandez admits she doesn’t know much about Mayer except for what she has seen on video.  “I saw her fight once, that was her last fight. I didn’t know anything about her, I saw her a couple of times on social media.  I then saw her fight and I saw that she is a go-getter too.  Being 100% honest, they are putting tomato cans in front of these girls.  I never got that chance.  I am look at it like, can I survive an onslaught like that and I am, of course, I can, I fought Chevelle Hallback.”

There is no doubt with a win over the popular Mikaela Mayer it would put Hernandez, at forty years old, at the highest point in her career with hopefully a myriad of choices in front of her including a world title bid.  Obviously she is open to the idea as long as it makes economical sense.

“I am the mandatory for (Jessica) McCaskill, they found a way to weasel themselves out of that and recently I heard they made the point that nobody wants to fight them, yeah, because you don’t want to fight me,” she explained.  “I didn’t go into this looking for a title shot, I just wanted to fix my record.  It has been 11 months since I have been in the ring, no one is knocking on my door, and the ones that are knocking on my door, why would I step into the ring for $3,000 dollars?  People want me to go to their country, calling me out, and its $4,000 dollars for 10 rounds.  What am I supposed to do?  Buy another pair of Gucci shoes?  I don’t have time for that.”

To listen to the complete unedited interview, please visit www.BlogTalkRadio.com/2MinRound