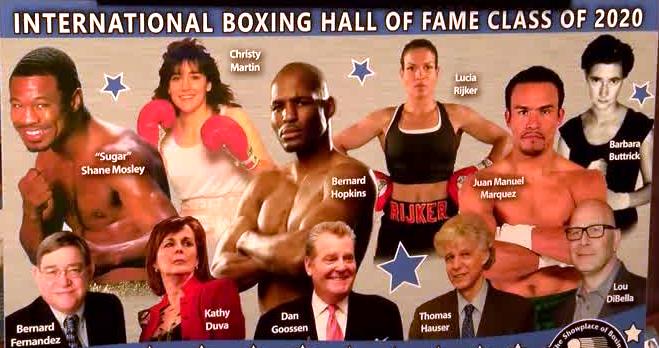 In the United States the popularity of professional female boxing comes in waves.  In the 90s we had Christy Martin on the cover of Sports Illustrated and Mia St. John as a centerfold in Playboy magazine while other women made their name on sporadic cable tv fight cards. In the 2000s we saw a wave of young women follow their male siblings or other family members into boxing gyms which bore fruit in 2012 and 2016 Olympics.

In the last couple of years, we have seen female boxing make arguably its biggest jump in popularity with every major promoter with at least one high caliber female boxer within their ranks as well as women being predominantly showcased on major fight cards from ESPN to DAZN to HBO before its surprising excursion out of boxing a couple of years ago.

Last year female boxing hit a milestone with the introduction of women into the International Boxing Hall of Fame located in Canastota, New York. The hall, established in 1990, is considered the most recognized institution out of the many in the sport.

In the inaugural class in the hall for female boxing, it was no surprise the legendary Christy Martin and Lucia Rijker were the first inductees of the modern era along with Barbara Buttrick in the trailblazer category.  Unfortunately, because of Covid-19 the inductees for 2020 did not have their ceremony traditionally scheduled for June every year.  It was announced Martin, Rijker and Buttrick will share next year’s ceremony with the 2021 inductees.

Following is the list of the nominees on this year’s ballot.  To be eligible for nomination in the modern era the fighter must be retired for a minimum of three years as well as their last bout not being earlier than 1989.

Laila Ali (24-0, 21KO) – Laila might have had some doors open for being the daughter of the late-great Muhammad Ali but her talent kept her in the room.  She retired from the sport with an unblemished record as she ruled the super middleweight division for the majority of her eight-year career. On her record she owns wins over the likes of Jacqui Frazier-Lyde, Christy Martin and Gwendolyn O’Neil.

Sumya Anani (25-3-1, 10KO) – Anani began her athletic career as a weightlifter but by the mid-90s she began boxing.  Anani’s biggest win came in late 1998 when she defeated Christy Martin via a ten-round majority decision.  Prior to that loss Martin had not lost in nine years and 35 fights.  Wins over Belinda Laracuente, Fredia Gibbs and Jane Couch solidified her career.

Regina Halmich (54-1-1, 16KO) – There might not be a more accomplished record in professional female boxing than Halmich’s.  Fighting out of the women’s boxing hotbed of Germany, Halmich has more championship fights than most female fighters have total bouts.  Halmich fought in nearly 50 championship bouts with only one loss and one draw blemishing her almost perfect record.  She was able to avenge the draw against Elena Reid but unfortunately not her controversial loss to Yvonne Treviño in her only fight in the United States.

Holly Holm (33-2-3, 9KO) – Many know Ms. Holm as the executioner of Ronda Rousey in the UFC but the soon to be 38-year-old New Mexican native had a full boxing career prior to her excursion into mixed martial arts.  Holm’s boxing career spanned ten years beginning in the early 2000s capturing titles from 140-154 pounds.  Unfortunately for Holm at the time female boxing was at a downswing and Holm did not get much exposure even after becoming a star in her hometown of Albuquerque, NM.  Holm owns wins over fellow nominees Christy Martin and Mary Jo Sanders as well as Mia St. John, Chevelle Hallback and Mary McGee among others.

Susi Kentikian (36-2, 17KO) – Born in Armenia but making her home in Germany from an early age, the “Killer Queen” was one of the first big female boxing stars in her adopted country.  After a successful amateur career, she went pro in ’05 and while developing as TV star Kentikian captured two-world titles at 112 pounds.  23 of her 39 pro fights where for a world title with wins over Carolina Alvarez, Elena Reid, Ana Arrazola, Simona Galassi and Naoko Fujioka among others.  Her only losses came against world-class opposition in Melissa McMorrow and Carina Moreno.

Giselle Salandy (16-0, 6KO) – We will never know how much more Salandy would have accomplished in her career.  A star in her native Trinidad and Tobago, tragically her life was cut short in a car accident at the early age of 21.  By then Salandy had captured both the WBA and WBC light middleweight titles and defended them five times.  She began boxing at the age of 11 and by 13 she was a pro.  A year later she won a regional title.  She became a world champion at the age of 17 stopping Elizabeth Mooney in the seventh round.

Mary Jo Sanders (25-1-1, 8KO) – One thing that distinguishes Sanders’ career is a series of firsts.  She was the first to conquer the WBC’s light welterweight and welterweight titles as well as the all-female world titles issued by the Women’s International Boxing Association (WIBA) in the 147- and 154-pound divisions.  Wins over Layla McCarter, Chevelle Hallback, Melissa Del Valle and Belinda Laracuente among others cemented her place as a nominee.  Sanders suffered the only blemishes on her record, a loss and a draw, to fellow nominee Holly Holm.

Laura Serrano (17-5-3, 6KO) – Although her official nickname was the Poet of the Ring, she could easily be called the Godmother of Mexican Female Boxing.  Serrano earned a law degree by day from the most prestigious university in Mexico but by night she honed her skills in a boxing gym training in secret.  She began her career as a professional with a draw in Las Vegas to Christy Martin.  When she was prohibited by law to fight in her native Mexico City, she used her degree to fight it and won.  During her 18-year career Serrano owns wins over Deirdre Gogarty, Layla McCarter, Alicia Ashley, Kelsey Jeffries and Chevelle Hallback among others.

Ana María Torres (28-3-3, 16KO) – Who could forget the two wars “Guerrera” Torres waged against fellow Mexican Jackie Nava? No respectable Mexican boxing fan can, and neither should any female boxing aficionado.  Torres began her career trained by Jose Morales, the late father of hall of famer Erik “Terrible” Morales, and by the time her 13-year career was over in ’12 she had faced and beaten many Mexicans while reigning as the WBC super flyweight queen.  She defended the green and gold belt ten times.  In her career she beat fellow world champions like the aforementioned Nava, Mariana Juarez, Esmeralda Moreno, Ava Knight and Naoko Yamaguchi.

Ann Wolfe (24-1, 16KO) – Considered one of best to have ever laced up a pair up gloves, the inaugural class to IBHOF would not be legitimized unless “Brown Sugar” was on the list.  After a four-fight amateur career Wolfe went pro in ’98 and captured

her first title, the vacant IFBA super welterweight strap, in 2001 with a unanimous decision over Vienna Williams.  Wolfe kept on collecting belts in upcoming years going all the way up to light heavyweight.  Her one punch knockout of Vonda Ward in 2004 has gone around the boxing world as one of the most deadly stoppages in the sport no matter the gender.

(photo by WKTV) Special note: due to the coronavirus this year’s ceremony was postponed. Next year both class of 2020 and 2021 will be honored.