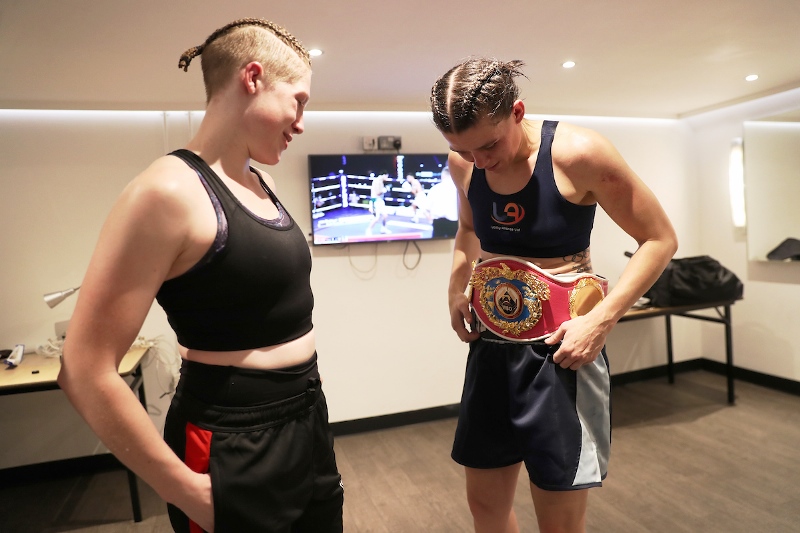 England’s Savannah Marshall slowly and deliberately dissected Scotland’s Hannah Rankin to win the vacant WBO middleweight world title by stoppage on Saturday. There was no disputing the end.

Marshall (9-0, 7 KOs) built an entire reputation on a single amateur win, but showed she has the goods in the professional fight world by soundly defeating Rankin (9-5) at the fan less Wembley Arena in London, England.

Many years ago Marshall defeated current super welterweight world champion Claressa Shields in an amateur fight. That decision win has been used by her and her supporters to point to superiority and other taunts.

But against former world champion Rankin, the tall power-hitting British fighter took her time in examining the Scottish fighter’s style and then simply went to work.

Using angles and long rangy punches Marshall kept Rankin off-balance and probed repeatedly with rights and winging lefts. For the first three rounds Rankin was able to fend off attacks with head movement and sharp counters. After winning the first round Rankin discovered that it was merely the beginning.

Marshall increased the tempo in the fourth round and began circling to the right and left while punching and creating angles for Rankins counters. Though not every blow landed occasionally the left or right would connect. Rankin also connected but found it harder to land flush.

Quickly it was apparent that Marshall gained almost complete control with her constant punching. Very few were telegraphed but the punches kept coming and Rankin found it more difficult to slip. For the next three rounds including the fourth it was all Marshall who kept the pressure on Rankin.

In the seventh round a Marshall right uppercut landed flush under Rankins chin and wobbled the Scottish fighter. Though she remained upright it was clear she was hurt and Marshall unloaded a barrage that eventually forced Rankin to take a knee. The referee gave her a count and then waved the fight over at 1:59 of the seventh round.

“I watched the other Matchroom girls get their chances and I thought when is my chance ever going to come,” said Marshall. “Tonight it did. And I grabbed it with both hands.”

The win by Marshall sets her up for possible unification fights with other middleweight titlists such as Ema Kozin, former champion Christina Hammer and of course the former undisputed middleweight titlist Claressa Shields who now rules the super welterweight division.

“The only reason Claressa’s got the belt is because she got there before me. Not because she is better than me,” said Marshall. “I know that she don’t want none of me.”

A super bantamweight clash for the new British Commonwealth title between undefeated fighters Carly Skelly (3-0-1) and Amy Timlin (4-0-1) ended in a split draw despite the seemingly clear success by the fighter from Liverpool.

Skelly, a southpaw, charged in under the blows of Timlin and quickly found a home for repeated left hands. It was a formula that found success throughout the fight for Liverpool’s Skelly.

But apparently Timlin, who was the large betting favorite, convinced judges she was successful enough to win the fight on one judge’s card and a draw on another. She did have success in the fourth and fifth rounds when she was able to use her footwork and combinations at long range.

Most of the fight was fought inside where Skelly took advantage by slipping under Timlin’s blows and then countered with lefts up the middle between the guard. It proved successful for most of the fight.

In the final round Skelly pummeled Timlin’s body and moved up to the head. It seemed clear that Skelly dominated the last round.

Ramla Ali (1-0) used her abundance of talent to plow through the ultra-determined Eva Hubmayer (1-1) and win by unanimous decision after six rounds in a super bantamweight match.

Ali, a former amateur star originally from Somalia, was able to display her height, speed and length against the shorter and stockier Hubmayer. But despite the rapid fire blows Hubmayer just would not quit. It was a gutsy performance by Hubmayer who is originally from Germany. She just could not match the physical advantages and skills of Ali who won 60-54 according to the judge and referee.