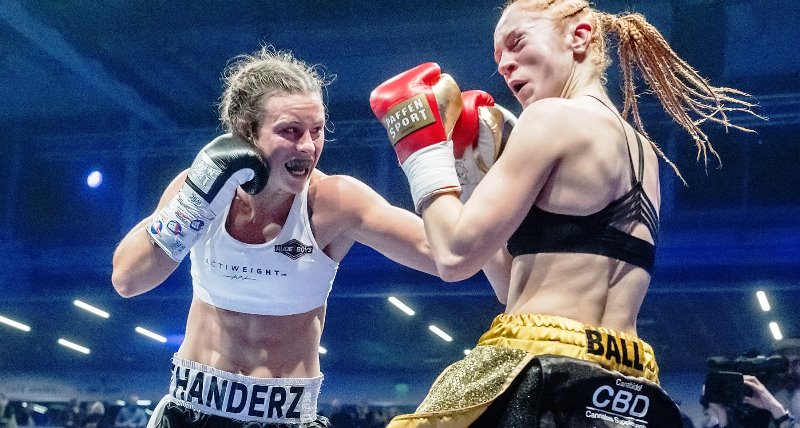 Those who have watched WBC Interim super-featherweight titlist Katharina Thanderz in action understand that one of her strongest assets is consistency, in either keeping her guard up or maintaining an attack plan.

That consistency has kept her undefeated while leading to a record of 13-0 (2), and helped secure a position as mandatory challenger to “regular” champion Terri Harper, affirmed at the WBC’s recent convention.

The 32-year-old Thanderz, originally from Oslo, Norway now living in Alfaz del Pi, Spain does an excellent job of sticking to her varied, multi-faceted fight strategies and working hard for the full duration of her matches.

She’s actually been geared up to meet Harper (10-0-1, 5 KOs) since last March, after Harper captured the belt from long-reigning Eva Wahlstrom in Sheffield, England.

“Yes, it has been almost a year since my last fight,” Thanderz told The Prizefighters.com. “And yes, my next fight will probably be with Harper. I’ve been training hard all the time, so I’ll be ready!”

Thanderz has a wide smile that she flashes often, but she also has no problem letting the beast out once the bell rings.

Thanderz stayed busy back in 2019 and scored three victories, including an eight round unanimous decision over solid newcomer Rachel Ball. Still, one of those wins was maybe too close for comfort. Her most fight recent fight, last November against Brazil’s Daniela Ramos for the interim belt, was a split decision that could have gone either way.

Thanderz has been fine-tuning her skills throughout the quarantine.

“The lockdown period went much better than expected,” said Thanderz. “Even if it was hard to adapt the mindset the first couple of days. I ended up having a very nice training routine every single day. Spain, where I live, was very strict. So it was police controls all over the place, and it wasn’t even possible to go out and run. I was really glad to have a house with a garden because I could enjoy that sunshine and train outside. I did a lot of Hiit circuits.

“I had a boxing bag in my garden and my coach lives very close by so he came to help me with pad work. I also helped my father a bit at his restaurant with deliveries. This was perfect, because I got a document that allowed me to drive and move around more than others.”

Thanderz stayed productive as the time went by.

“Of course, I’ve used all this time to improve my boxing and I can feel it now when I’m having my sparring sessions. I was back to the gym at the beginning of May when professional athletes were allowed to start normal workouts again. We’ve been able to do sparring, with several girls coming to the place I live, and also some guys we have at the gym. One of the girls I sparred a bit with was Miriam Gutierrez from Madrid, and that was really good.”

Thanderz had also gained experience during two weeks of sparring with Eva Wahlstrom prior to Wahlstrom’s bout against Harper.

“The sparring with Eva was a really, really fantastic experience. I learned a lot and also had a lot of fun. I learned about other ways and methods of doing things and it gave me a lot both personally and professionally. She’s very fast, very precise and extremely intelligent reading opponents and fighting different ways. It certainly made me grow.”

As quarantine restrictions were lifted, Thanderz could do a bit of video-scouting possible future opponents during the Harper-Natasha Jonas draw and Katie Taylor-Delfine Persoon rematch.

“The Harper versus Jonas fight was amazing,” says Thanderz. “What a fight! Female boxing needs that kind of fights. It made me proud of being part of all this, really. It was really close and tight, with a lot of action and war.

“Taylor versus Persoon was also good, but I thought that Harper versus Jonas was even better in the sense that we could see two really good boxers. Many people said that they saw Persoon winning. That’s not my opinion. I think Katie won really well, and proved why she’s undisputed in the lightweights. In my opinion she showed the world a great performance and talent. Of course Persoon was brave, no doubt about that, and also a true warrior. But she didn’t prove, in my opinion, to be as good a boxer as Katie.”

The meeting between Harper and Thanderz will be very meaningful toward establishing the immediate future and new order of the divisions around 130-135 pounds after champions like Taylor and Persoon decide to call it a day.

Thanderz understands current economics in women’s boxing and is quite ready, even anxious, to take on Harper in Britain.

“I went to Sheffield to watch Harper versus Wahlstrom, and again, I have to say I thought it was a tight fight. Such a big arena, with so many fans, it was a really nice evening. I’m totally OK meeting Harper in the UK, very happy to go there because I’ve never fought there before and it’s exciting to fight in a place with so many boxing fans.

“We both have two hands and two legs, so it shouldn’t really matter where we meet in the world. Of course, I hope for a fair result no matter what.”

While Thanderz has had plenty of time to prepare specifically for Harper, the primary question is whether or not the challenger possesses enough of an overall arsenal in style and strength to dethrone the young champion who is still improving and still seems plenty hungry.

Though Thanderz must be considered an underdog versus Harper, at this point she also has a decent shot at the upset. Thanderz has shown a solid variety of styles and puts her reach, listed at 67 ½, to very good use. Most importantly, she has demonstrated that excellent ability to effectively adapt her offense and defense to recent opponents.

Harper’s team may still choose an immediate rematch against Jonas, but Thanderz seems to have the inside track. As October began, Harper and Matchroom Boxing stated they would be announcing the next opponent very soon.

When Thanderz and Harper do clash, it should be yet another great matchup in this exceptional, pandemic time era of women’s boxing.