Two “Fight of the Year” Candidates in LA
Written by: David A. Avila 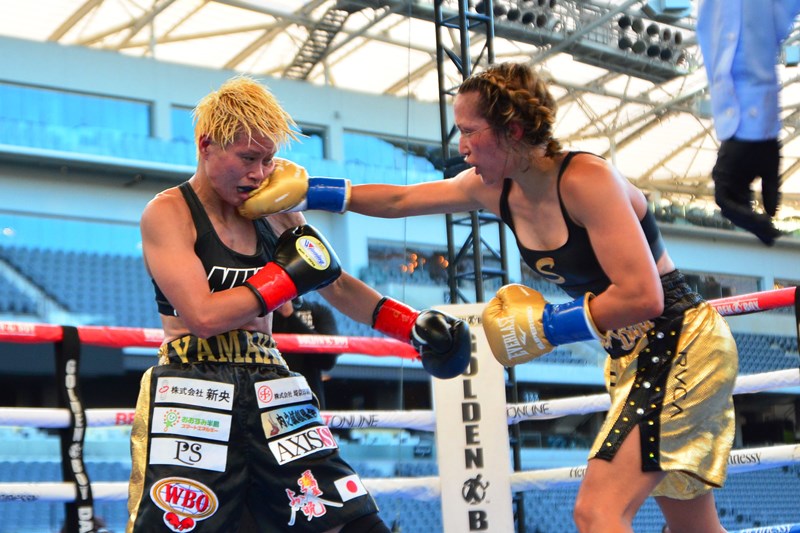 Maybe it was the intense heat, but Los Angeles and the world witnessed two electrifying world title bouts between Japan and the US last Friday.

Both are candidates for Fight of the Year.

Thanks to Golden Boy Promotions we saw two of the best fights this year.

First, we saw WBA flyweight titlist Naoko Fujioka enter the stadium with temperatures near 100 degrees against Sulem Urbina in a 10-round affair at Banc of California Stadium. It was hot.

Fujioka started slowly against Urbina who showed off excellent combinations and defensive skills in the first two rounds. It looked like the great Japanese fighter who captured world titles in five weight divisions had lost a step or two. Or maybe it was just Urbina’s athleticism.

“I felt I boxed very well,” said Urbina. “My defense was like never before.”

Urbina, a Phoenix, Arizona prizefighter, seemed comfortable in the sweltering heat of Los Angeles. Though she was facing Japan’s best fighter in history she looked confident and comfortable.

Fujioka seemed a step or two slow until the third round when she made adjustments. They were crucial in turning the fight around.

“I did not look good in the ring, but I was ok, and figured what to do,” said Fujioka who had defeated other great fighters like Mariana Juarez and Yokasta Valle. “I adjusted in rounds three and four. I got to attack her body and it worked.”

Urbina’s head movement and footwork made it difficult for Fujioka to score on top, but when she targeted the body it changed the complexion of the fight. Then it became a matter of who punched more.

Fujioka’s volume punching especially to the body convinced two judges that she was the winner. A third judge scored it even at five rounds apiece.

Both fighters seemed unfazed by the intense heat and fired away with big blows. It was impressive stuff and showed why Fujioka has won world titles in five weight divisions. It also showed that Urbina is a force to reckon with for anyone.

It definitely earned consideration for Fight of the Year.

For many this fight had a big question mark on Tenkai’s fighting ability. Yes, she had fought Fujioka to a draw two years ago, but could she really match skills with Estrada who recently entered the Top 12 pound for pound rankings after an impressive win against Anabel Ortiz this past March.

Fans witnessed a savage affair between two world champions. It was definitely another possible Fight of the Year candidate.

Estrada mixes her speed, agility, power and skills in a super blended form of fighting that seems unique. It also confuses many who step in the prize ring against her. When Tenkai stepped inside the ropes she seemed equally puzzled at first.

“Her quickness and continual attack made me hesitate,” said Tenkai.

The East LA fighter fired off lightning combinations and slipped out of range then darted in to unleash more dazzling combos. It was all Estrada in the first round and part of the second round. Then Tsunami got her bearings.

A stiff left jab by Tenkai jammed an Estrada combination who returned with her own left hook. Tenkai returned with two right hands then unleashed her own five-punch combination at the end of the round. The fight was on.

It was all about who could impose their will and who would break. Neither was able to dominate but Estrada was the busier fighter throughout. Tenkai had her moments and made each round very close.

Neither fighter could take a breath in any of the 10 rounds. It was fast and furious until the final bell.

Though judges saw it pretty wide for Estrada, many experts saw it much closer with Tenkai winning more than two rounds. The Prizefighters gave Tenkai three maybe four rounds, not a mere two. Still, Estrada was a definite winner in the savage encounter.

“I did not do everything I should have to get the win,” admitted Tenkai. “I should have thrown more punches after using my defense.”

“Though I did not win, what a joy it was to compete at this high level,” said Tenkai.

“I had to really dig deep and show that I can fight on the inside, exchange punches and work the body. I showed a different side to me. Tsunami is really tough, and I was surprised at her ability to take a lot of punches,” said Estrada who collected her second division world title.

Fans were finally able to see world class fighting by women in Los Angeles. They were not disappointed.

Fernandez has only lost to Lourdes Juarez and her sister Mariana Juarez, and former world champion Debora Anahi of Argentina. It should be another exciting match.

Juarez will be making the first defense of the world title she took from Guadalupe Martinez last December.