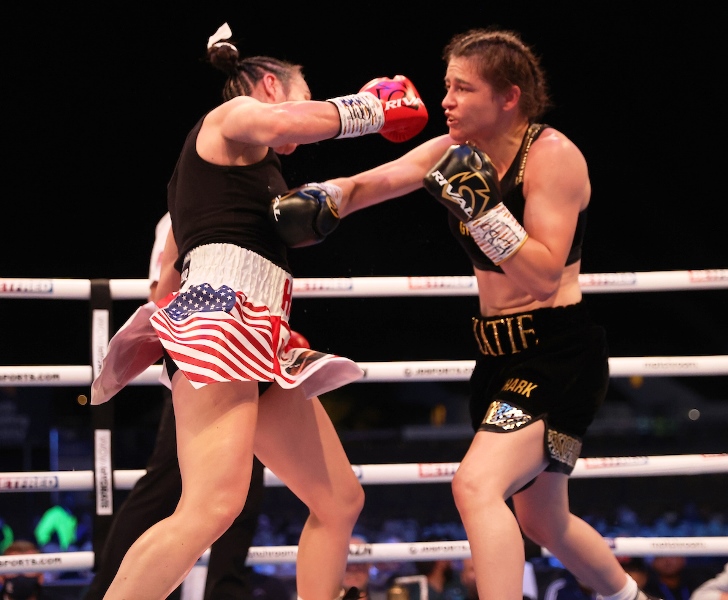 In a mere nine days women’s elite prizefighting swung 360 degrees from good to bad and back to good again.

A week ago, we saw southpaw slugger Amanda “the Real Deal” Serrano handily defeat Mexico’s Yamileth Mercado. A day earlier a young Mexican fighter Jeanette Zacarias was badly beaten in Canada and stopped. She would die five days later from injuries sustained in that match. The fight world mourned.

Last Saturday we saw Ireland’s Katie Taylor perform against America’s Jennifer Han and successfully defend her lightweight world championship. It was a skillful display of championship fighting that despite the lopsided but fair scoring, was competitive each round.

A few weeks ago, a conversation with a retired world champion with an urge to return to the wars took place. That champion was among the three or four top prizefighters to ever lace up gloves at the time she performed.

Much has changed in the women’s fight world during the past five years. The talent level has increased four-fold with many learning the intricate craft of professional boxing. No longer can a woman with super athleticism expect to dominate. No longer can a person with stubborn determination step in a boxing ring and swing away despite lack of talent or skill. It’s too dangerous.

It’s also paramount that matchmakers and promoters realize that professional boxing has always been one of the most dangerous sports. It’s a beautiful sport but mismatches can result in a young teen like Mexico’s Zacarias losing her life.

Zacarias had lost back-to-back bouts by knockout to undefeated opposition. Her last bout was against another undefeated fighter in Marie Pier Houle. But the Mexican fighter did not have the skill level to compete with any of those she lost via knockout. More than ever matchmakers need to think twice about mismatches.

Prizefighting has always been about entertainment. It’s the primary reason that boxing has existed as a sport longer than any other and will continue to survive. The sport pits one person against another. No team, no equipment, just boxing gloves and fighters stepping in a boxing ring.

Usually, prizefighters come from poor backgrounds. They come hungry with little or nothing in their possession and willing to exchange punches with another trained fighter. They also know their lives can be lost with a single punch.

In my 36-year long career as a boxing journalist, I’ve witnessed too many lose their life after battles in the prize ring. Not all came from mismatches, many came during world title fights where each foe was a skilled and hungry competitor.

My worst experience occurred when Jesus Chavez fought Leavander Johnson for the IBF lightweight world title in Las Vegas on September 2005. It was a fight that saw Chavez pummel Johnson who though out-gunned, refused to quit. He was willing to go down with his shield and despite absorbing massive blows would not go down. Finally, referee Tony Weeks stopped the fight and Johnson visibly was upset at the stoppage. As Johnson walked back to the dressing room I asked him about the fight and he told me “I could have won,” then began convulsing at that moment. His handlers immediately grabbed him and carried him to the dressing room. He was ambulanced to the nearby hospital. I visited him at the Las Vegas medical center and was told he was in a coma. Days later he would pass away.

Every professional boxer knows the danger that exists when they step into the prize ring. I’ve seen more than a dozen fighters lose their life after battling in between the ropes. It’s the primary reason I would never call a fighter a bum or journeyman or anything derogatory.

They are risking their lives every time they step into a prize ring.

Katie Taylor needed a little time to figure out the method of challenger Jennifer Han’s attacks and holding technique. But she quickly adapted and each round got slightly easier over the former featherweight world titlist from Texas.

“There was no room for complacency,” said Taylor. “I knew it was going to be a good challenge…she was pretty crafty and pretty slippery.”

Immediately after the fight, promoter Eddie Hearn of Matchroom Boxing which promotes Taylor, said that possibilities for Taylor to fight America’s Amanda Serrano and Jessica McCaskill are strong.

Hearn said he was especially impressed with Serrano’s ability to elevate and increase her star power with nationally televised showings in back-to-back fights.

Taylor has no problem meeting whoever presents the biggest option.

“I want the big fights. All those names. The biggest fights possible in women’s boxing,” said Taylor. “I’m pretty sure I will end my career undefeated.”

Though no date has been established, a tournament to determine the undisputed super lightweight world champion will take place according to DiBella Entertainment and Matchroom Boxing. DAZN will stream the tournament.

WBC titlist Chantelle Cameron will fight IBF titlist Mary McGee and in another match WBA, WBO and IBO titlist Kali Reis meets Jessica Camara. The winners will then fight each other – at a later date – to determine the true undisputed super lightweight world champion.

“If we can work together to find one champion for every division then it would be a massive moment for the sport and we have a great opportunity to do that in the 140lbs division,” said Eddie Hearn, Matchroom Sport Chairman.

Both DiBella and Hearn were able to come to an arrangement. DiBella Entertainment works with three of the competitors Reis, McGee and Camara. Hearn works with Cameron and his media outlet DAZN will provide the viewing. No site or date has been decided. But the main participants are determined.

“Both DiBella Entertainment and Matchroom have been leaders in advancing women’s boxing and elevating the great female fighters in our sport,” said Lou DiBella, president of DiBella Entertainment. “I’m happy that Eddie and I were able to arrange these historic fights and I’m grateful to my friends at DAZN, who will be streaming it. Chantelle, Mary, Kali and Jessica are four elite 140-pound athletes, deserving of this incredible opportunity. After two terrific semi-finals, a queen will be crowned at super lightweight.”

2-Min Round: Hooks and Jabs radio/podcast

Based in Las Vegas, the super flyweight originally from Atlanta, is scheduled to fight on Sept. 18 in Monterrey, Mexico.

The “Black Rose” McCoy will be facing Cynthia “La Canelita” Margain in a six round super flyweight clash at the Arena Jose Sulaiman in Monterrey, Mexico.

You can listen to McCoy and hosts Felipe Leon and Lupi Gutierrez of the 2-Min Round: Hooks and Jabs show via Instagram, Facebook or Twitter. It can also be found on Blogtalkradio.com.

Ayelen Granadino (6-1-3) and Jazmin Villarino (4-1-2) fought to a majority draw after 10 rounds on Saturday Sept. 4. The Argentine light flyweight title match was held in Buenos Aires.

Marianela Ramirez (7-7-1) scored a technical knockout win over Lilian Silva (4-9-1) in the second round on Saturday Sept. 4. The featherweight fight took place in Cordoba.

Adeline Polys (0-0-1) and Fanny Gruzelle (0-1-1) fought to a majority draw after four rounds on Friday Sept. 3. The super featherweight match was held in Liege.

Montserrat Alarcon (16-4-2) won by unanimous decision in an eight round fight versus Tania Garcia (6-6) on Saturday Sept. 4. The minimum weight match took place at Hermosillo.

Angelika Kryzstoforska (2-0) defeated Dorina Moscar (0-1) by technical knockout in the fourth round on Friday Sept. 3. The bantamweight bout took place at Bialystok.

On Saturday Sept. 11, bantamweights Tatyana Zrazhevskaya (11-0) and Jessica Gonzalez (7-5-2) meet 10 rounds at Ekaterinburg for a title.

Miranda Barber (2-2) won by first round knockout over Ayanna Tramont (1-1) on Saturday Sept. 4. The middleweight match was held in Huntington, New York.