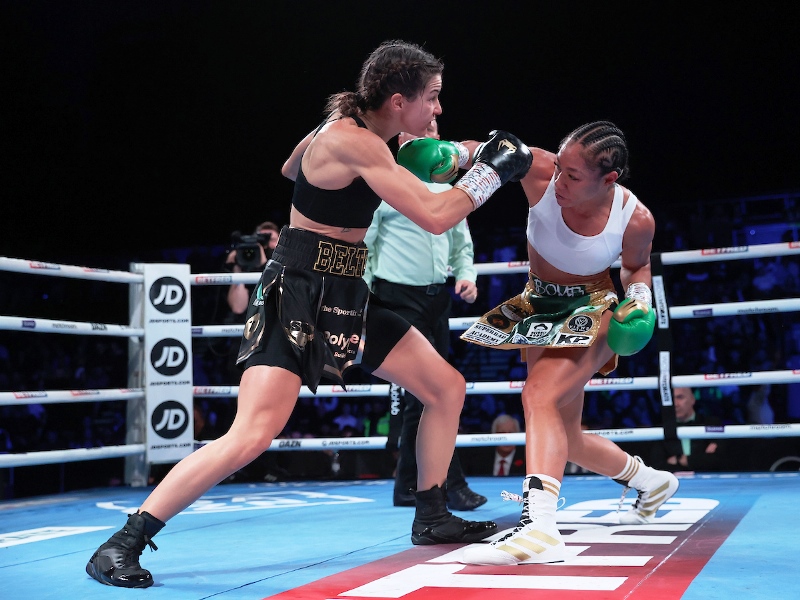 A fabulous year in women’s prizefighting needed two parts to summarize the amazing events including the beginning of a super lightweight tourney, the amazing continuation of Amanda Serrano’s march toward becoming world recognized and Katie Taylor proving she’s at another level of championship fighting prowess.

Many surprises took place in 2021.

In the heat of August, super lightweights led the way on August 20 in San Diego as Kali Reis defeated Diana Prazak by majority decision in a rough and tough rumble. It was part of the tourney to decide undisputed status in the 140-pound weight division. Also, Jessica Camara was expected to participate but her opponent was unable to enter the country.

Canada’s Kim Clavel met Mexico’s Maria Soledad Vargas and out-boxed the fighter who had fought atomweight champion Fabiana Bytyqi to a draw. Clavel was able to use her quickness and skills to beat Vargas and win a regional light flyweight title.

Amanda Serrano returned to the boxing ring to defend the featherweight titles and induced Mexico’s Yamileth Mercado the super bantamweight champion to move up in weight and fight. They met on August 29 at Cleveland on the Jake Paul fight card and provided 10 rounds of mayhem. In front of a massive audience Serrano showcased why many consider the pretty Puerto Rican to be the most dangerous fighter today. It was amazing that Mercado was able to survive the onslaught.

Undisputed lightweight world champion Katie Taylor met America’s Jennifer Han on Sept. 4 in Leeds. Though Han had world championship credentials and solid boxing skills, she was no match for Taylor who continually battered her in every round to win by unanimous decision.

Shannon Courtenay finally met an American fighter on Oct. 9 and lost the WBA bantamweight title to Jamie Mitchell by majority decision in Liverpool, England. Courtenay, a powerful fighter, was simply out-boxed when power alone was not enough. Mitchell, who fights out of Las Vegas, was not a surprise to those who had seen her perform in America.  Courtenay will probably get a rematch.

In one of the worse decisions of the year, Etsuko Tada and Thi Thu Nguyen met on Oct. 23 in South Korea. After 10 rounds of thoroughly out-boxing Vietnam’s Nguyen all three judges somehow gave the world title to the wrong boxer. Tada was in total shock by the decision. The WBO needs to look at these judges.

A much-anticipated confrontation between super lightweight world champions Chantelle Cameron of England and America’s Mary McGee took place on Oct. 30 in England. Though the scores seemed wide Cameron was the winner with an impressive performance after 10 rounds and now holds the WBC and IBF super lightweight titles.

Mexico’s two most famous fighters Jackie Nava and Mariana Juarez finally met on Oct. 30 in Mexico. It was a match that took place two years too late. Mexico City’s Juarez no longer has the legs or speed and was soundly defeated by Tijuana’s Nava.

After badgering and assaulting each other on social media Mikaela Mayer and Maiva Hamadouche finally engaged in physical combat on Nov. 5 in Las Vegas. The shock and awe of their fight was mesmerizing and violent. After 10 rounds of exchanging vicious blows Mayer walked away with the victory by unanimous decision and with the IBF and WBO super featherweight titles. It was deemed the Fight of the Year by most boxing publications. What a fight.

In a different kind of performance Lourdes Juarez showed Luz Aguilar on Nov. 12, that  there are other ways to win a fight. Juarez out-slicked and out-fought her challenger to retain the WBC super flyweight world title. The younger sister of Mariana Juarez is coming into her own and proving to be quite a boxer.

America’s Alycia Baumgardner accepted an opportunity to face England’s WBC super featherweight titlist Terri Harper on Nov. 13 and made the most of it with a single punch knockout that left the champion frozen standing up. It was deemed the Knockout of the Year and gave Baumgardner the WBC world title and a chance to be undisputed super featherweight champion in 2022. Baumgardner, a rival of fellow American Mikaela Mayer, is anxious to exhibit her fighting skills to the world.

Denmark’s Dina Thorslund and Mexico’s Zulina Munoz met on Nov. 13 in Denmark. Thorslund battered Munoz and ended the fight with a body shot knockout to retain the WBO bantamweight title. It was one of the best knockouts in 2021.

Super lightweights collided in New England as American Kali Reis and Canada’s Jessica Camara tangled in one of the top fights of 2021. After 10 turbulent rounds Reis emerged the winner and now has the WBA, WBO, IBO titles. She will be clashing with England’s Chantelle Cameron for undisputed status in the super lightweight division.

A battle between two Argentine former world champions Debora Dionicius and Marcela Acuna on Nov. 20 saw perhaps the end of an era. Dionicius had lost several of her last fights but when she moved up in weight that extra pounds seemed to add more energy. She soundly defeated the legendary Acuna by unanimous decision in Buenos Aires.

Undisputed welterweight champion Jessica McCaskill met Kandi Wyatt on Dec. 4 in Las Vegas and soundly battered the willing Canadian with a blistering performance that ended by technical knockout. It was pure violence at its one-sided best and showed that McCaskill has unlimited stamina.

Again undisputed lightweight champion Katie Taylor defended her titles and this time against Kazakhstan’s Firuza Sharipova on Dec. 11 in England. One again Taylor proved too talented for anyone not on the elite level and won by unanimous decision.

America’s Amanda Serrano and Spain’s Miriam Gutierrez met on Dec. 18 in Tampa, Florida USA. Serrano, a seven-division world champion, moved up from featherweight to challenge lightweight contender Gutierrez who had lost in 10 rounds to Katie Taylor. The powerful Serrano pulverized the bigger fighter in every round. It was another display of the Brooklyn fighter’s incredible talent and why many consider Serrano the most dangerous fighter on the planet.

A battle between undefeated minimumweight fighters saw Seniesa Estrada knock down and knock out Guatemala’s Maria Santizo in spectacular fashion on Dec. 18, in San Antonio, Texas. It was proof that undefeated records can be deceiving with East L.A.’s Estrada clearly too good for Santizo in the minimum weight world title fight. For Estrada, her three wins catapulted her to the top 10 in pound for pound rankings. She’s tiny but powerful.

Also in San Antonio, Marlen Esparza made the first WBC flyweight title defense against former minimum weight champ Anabel Ortiz on Dec. 18. Esparza proved to be too quick and too big for Ortiz who held her own but couldn’t overcome the physical assets of the champion. Esparza capped the year with three wins.

Costa Rica’s Yokasta Valle and Mexico’s Elizabeth Corzo fought for the IBF minimumweight title on Dec. 18 in San Jose. It was Valle’s third defense of the title since winning it in 2019. Her win by decision now sets up a potential showdown with Seniesa Estrada who won on the same night.