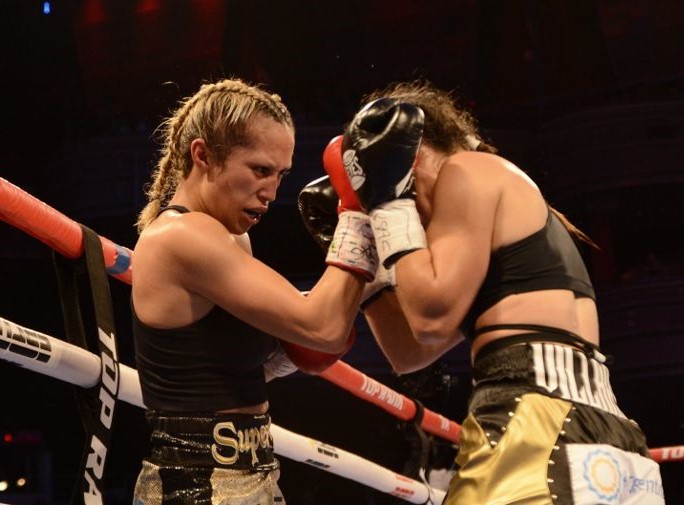 LAS VEGAS-Seniesa “Super Bad” Estrada brought her brand of fighting to the casino city along with her numerous Hollywood celebrity friends and fans and delivered a shutout performance in a dominant unanimous decision win to retain her WBA minimumweight title on Saturday.

It was Estrada’s crowd and she anxiously delivered.

“This is my destiny and you can’t change destiny,” she said.

Like a vintage bottle of champagne, Estrada (23-0, 9 Kos) held back the pent-up explosion and eagerness to unleash bombs on Argentina’s Jazmin Villarino (6-2-2) at the Pearl inside the Palms Casino where a sold-out crowd filled the small Las Vegas arena.

At times the petite pocket bomber from East L.A. seemed eager in the first two rounds to prove her worthiness for the alleged lucrative contract signed with her new promoter Top Rank. It was especially poignant that only one other female fighter on their roster is friend Mikael Mayer.

Estrada took heavy breaths and shrugged her body seemingly to relieve the explosion she harbored in her punches. After nearly a year away from actual prize fights she was anxious to unleash the 11 month’s worth  of preparation and sparring.

The challenger Villarino was not anxious to exchange early with the champion. She circled around hoping to catch Estrada over-extending herself. But Estrada’s many years of experience as both a professional and amateur kept her from being over-zealous. Still, Estrada popped stinging blows to the body and head and slipped Villarino’s counters.

Villarino committed fully in the third round and advanced forward. It was then that the arena echoed with the blows delivered by Estrada that were thunderous for her size. A blistering four-punch combination was met by a Villarino counter right and the fight was on.

Could the Argentine match the East L.A. fighter’s power?

Estrada opened up her entire repertoire of blows and Villarino absorbed them. A left hook, left uppercut and right by Estrada sounded ominous but the Argentine barely wavered. That seemed to signal to the South American fighter that matching blows with Estrada could be done.

From the fourth round on Villarino established a plan to keep Estrada near or on the ropes and unleash punches anywhere. That also allowed Estrada to pull out her vast array of weaponry and uppercuts, left hooks and overhand rights boomed for the remainder of the fight. The Argentine fighter’s face got red and swollen, especially on her left side of her face where an egg-shaped welt developed.

Alongside the ropes Villarino found some success by holding one of Estrada’s arms while punching with the other. The blows were bothersome but not nearly enough to cause serious harm. But it gave the Argentine some sense of accomplishment.

Estrada quickly realized Villarino’s plan and maneuvered deftly to one side or the other or gently nudged the Argentine away. And when Villarino opened up Estrada slipped and fired three-punch combinations. Both connected but Estrada’s could be clearly heard and that was the difference.

After the end of the sixth round the large welt was inspected carefully by the ringside physicians and after some conversation the fight was allowed to continue. That hint of suspension fired up Villarino.

The Argentine fighter was not willing to lose without getting her licks in despite the firepower coming back. It was inspiring to see the two female fighters battle it out until the end.

“She wanted to defeat me,” said Estrada. “I was prepared.”

Estrada seemed to relish a brawl and the two exchanged punches with liberal proportion. Villarino landed combinations and Estrada answered back. The audience suddenly got splashed with anticipation that perhaps a knockout was coming. Despite her size, Estrada developed a reputation as a knockout puncher especially below 112 pounds.

Despite the furious last two rounds both fighters remained standing and surprisingly not spent after unloading blows nonstop. After 10 two-minute rounds all three judges scored it 100-90 for the WBA champion Estrada. She was seemed emotionally relieved the fight finally took place and she had performed.

The champion told the crowd and especially the smaller girls in the audience that the fight was dedicated to them and all other female athletes to continue their quests.