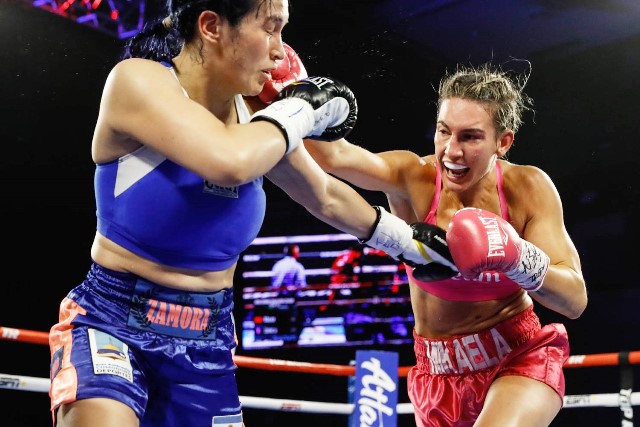 Mikaela Mayer pummeled her way to a knockout victory over Argentina’s Alejandra Zamora to retain the NABF super featherweight title on Saturday.

It was a statement fight to the rest of the super featherweights of the world.

The California-bred Mayer (12-0, 5 KOs) shred through Zamora (7-4) to successfully defend the NABF title at Reno-Sparks Convention Center in Reno, Nevada. It was the third defense of the title. Now it’s on to bigger things.

After less than a minute of the opening round it looked like Mayer was going to end the fight early as she floored Zamora with a three-punch combination that left the Argentine fighter looking bewildered and surprised by the American fighter’s power. Somehow Zamora got up and punched her way back into the fight.

“I was wondering if she would get up,” said Mayer of the first round knockdown. “She took some good shots.”

Mayer seemed zeroed in on ending the fight quickly. Another barrage of blows to the body and head opened up the second round and Zamora fired back to show that surrender was not in her genetic makeup. Both fighters exchanged serious blows and though Mayer was hit more than usual, she seemed to be willing to exchange blows to prove her blows were bigger than Zamora’s.

By the fourth round Mayer found her left hook and unloaded to the head and body against the Argentine fighter. The end looked near but Zamora, who had never been stopped in her career, kept fighting back with whatever she could like a cornered cat.

In the fifth round the taller Mayer connected with two monster right hands and Zamora’s head snapped violently from the blows. Still, she continued to fight to survive and Mayer showed no mercy to the Argentine.

The end looked near in the sixth round as Mayer seemed tireless and Zamora looked somewhat bewildered to find answers to the American fighter’s attacks. Though she connected against Mayer, it was like throwing a cup of water on a bonfire.

Mayer opened up the sixth round with a left hook-right cross combination that snapped Zamora’s head around. How she remained standing after those blows was a victory in itself, but it seemed to sap the energy from her as she tried fending off more blows from Mayer. At the end of the round, Zamora’s corner signaled to referee Russell Mora to end the fight. Mayer was awarded the victory by knockout. It was also her first win by knockout in five fights.

“Eva Wahlstrom is who I want next,” said Mayer.