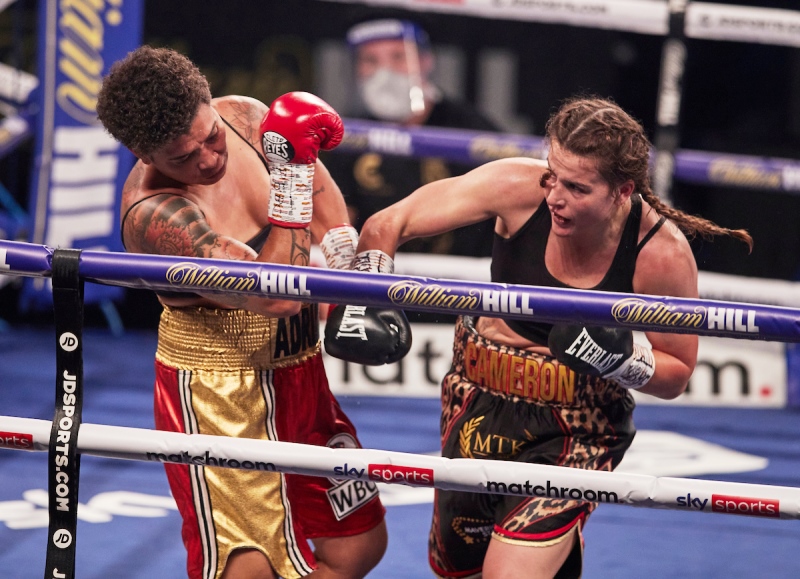 Although Cameron (13-0) was the favorite, few expected Brazil’s Araujo (6-1) to arrive nearly six pounds too heavy. Those extra pounds seemed to make her feet too heavy to keep up with the quicker Cameron.

Araujo was stuck in mud.

“She was a lot heavier and I could feel the weight difference. It’s just instincts, I like to have a scrap! Winning this world title is perfect timing for me. If it were eight fights ago or even five fights ago she would have beat me because I would have just stood there toe-to-toe,” said Cameron. “I’ve learned to box more. They (trainers) keep telling me to pace myself and hold myself back more. It worked.”

Both were fighting for the title vacated by Chicago’s Jessica McCaskill who now reigns over the welterweight division. Despite her departure, the super lightweight division has plenty of talent to go around, especially in America.

Cameron’s talent was never in doubt, she had a lengthy amateur career and has looked very strong in her previous prize fights. Against the Brazilian she showed off her footwork, precision and stamina. After 10 rounds the fighter from Northampton, England looked capable of going 10 more.

Too bad it was not three-minute rounds. Cameron might have gained a stoppage.

“I wanted this belt, so I had to keep my head on. She wasn’t professional enough to make the weight, but I knew no matter what I was becoming champion,” Cameron said.

Matchroom Boxing promotes Cameron and is quite capable of matching her against the other super lightweight world titlists and contenders. Most are from America.

Can you picture Cameron against IBF titlist Mary McGee or multi-division former world champion Melissa Hernandez? Or how about a Katie Taylor clash should the undisputed lightweight world champion decide to move up and stay at the 140-pound super lightweight level?

Those all would be enticing match ups.

Cameron showed she’s not just hype, but talented and ready to prove it.

These are exciting times for women’s prizefighting.

Several eye-catching bouts are coming up very soon. First up will be a battle between former amateur stars now fighting under the Golden Boy Promotions umbrella:

On Oct. 30, Marlen Esparza (7-1) and Sulem Urbina (12-0) meet for a regional title at Fantasy Springs Casino in Indio, Calif. Both have fought each other in amateurs but pros are a different environment. This time they will battle for 10 rounds without head gear and with smaller gloves. It makes a world of difference.

The very next day in Las Vegas a super featherweight clash takes place at the MGM Grand Bubble.

On Oct. 31, Mikaela Mayer (13-0) and WBO super featherweight titlist Ewa Brodnicka (19-0) of Poland will compete for 10 rounds. The Top Rank show will be televised by ESPN.

A few weeks later a Matchroom Boxing tripleheader takes place in Europe. No destination has been established but it will take place.

All three world title fights will be streamed by DAZN and shown by Sky Sports.

Shadasia Green (6-0) knocked out Mexico’s Martha Lara Gaytan (11-9) in the first round on Saturday Oct. 3. The super middleweight fight took place at Ocotlan, Jalisco. Green fights out of the New Jersey.

On Saturday Oct. 10, super lightweights Karen Te Ruki (2-1) and Baby Nansen (8-4-1) meet in an eight round contest at Manukau City.