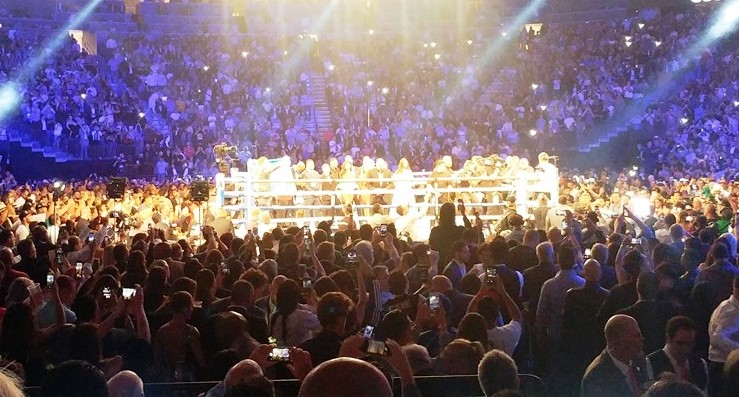 Great strides took place in women’s prizefighting despite a year of tremendous loss.

A few of the best were able to showcase their skills and attitude that had remained under a cloak of neglect. Women prizefighters like Katie Taylor, Jessica McCaskill, Terri Harper, and Mikaela Mayer showed off their fighting prowess to large audiences via television or streaming.

Many, however, remained invisible.

“Women are getting hit proportionately worse in the U.S. and North America,” said promoter Lou DiBella who works with many of the top American fighters. “Women’s boxing needs a push right now.”

It’s our wish at the Prizefighters.com that 2021 brings gifts to those not active.

Great fighters like Claressa Shields, Kenia Enriquez, Franchon Crews, Adelaida Ruiz, Naoko Fujioka, Yesica Bopp, Hanna Gabriels and Heather Hardy were inactive for several reasons for most if not all of the year 2020.

Aside from the coronavirus epidemic, that stalled smaller promoters from holding events due to the cost of testing and quarantines, changes took place that stymied female boxing from progressing especially in the U.S.

Perhaps the largest loss was Showtime Boxing dropping women’s boxing from its roster of fights after a new budget was announced last summer. It was a severe knockout blow to female prizefighting. It stunned many of the top fighters who were aligned with that network.

Shields, the undisputed middleweight world champion and current WBC and WBO super welterweight titlist was on the verge of sweeping up the IBF and WBA versions too. The rug was pulled from under her team that had guided her career to heights never seen before in American women’s boxing.

Other Americans like Alicia Napoleon had performed magnificently even in defeat. Her fight against Elin Cederoos for the IBF and WBA super middleweight world titles was televised by Showtime. It was a spectacular back and forth fight that epitomized female prizefighting.

No clear explanation was ever given by Showtime network for dropping women’s prizefighting.

Recently, a new media outlet NBC Sports Network has arrived the past few months and provided boxing audiences with two female bouts including a world title clash between Jelena Mrdjenovich and Paola Torres. It was one of the better fights of the year.

The arrival of a Covid-19 vaccine has increased hopes that 2021 will be better for the world and for women’s prizefighting too.

“2021 will absolutely be better. But it needs regular programming not just the token slot to advance the sport,” said DiBella who is currently working on a featherweight world title unification clash between Amanda Serrano and Jelena Mrdjenovich for next year.

Despite the sorrow and hardship of 2020, the women prizefighters who were able to perform carried the sport and excelled. Next year will indeed be better.

Franchon Crews-Dezurn will be fighting Ashleigh Curry in an eight-round nontitle fight on January 2, at American Airlines Center in Dallas, Texas. Crews holds the WBC and WBO super middleweight world titles and could be headed for a unification bout with Elin Cederoos the IBF and WBA titlist next year.

Crews versus Curry will be shown on DAZN. It’s on the Golden Boy Promotions fight card featuring Ryan Garcia versus Luke Campbell for an interim lightweight world title.

Anahi Sanchez (20-5) won by technical knockout in the third round versus Maria Capriolo (7-12-4) on Friday Dec. 18. The super lightweight match was held at Pergamino, Buenos Aires.

Alys Sanchez (17-7-1) won by technical knockout in the seventh round versus Paulina Cardona (25-24-6) on Thursday Dec. 17. The super featherweight bout took place at Puerto Colombia. Also, Monica Henao (3-1-3) stopped Lira Huyke (1-1) in the fourth round of their lightweight bout. Plus, Veronica Zuluaga (1-0) won by second round technical knockout over Mirleydis Hoyos (0-2) in the second round of a super bantamweight fight. Also, Paulina Angel (2-0) knocked out Rocio Argel (0-1) in the first round of a super featherweight match.

Amanda Serrano (39-1-1) knocked out former champion Dahiana Santana (36-13) in the first round on Wednesday Dec. 16. Serrano, the WBO featherweight world titlist, fought at lightweight against Santana in a fight to stay busy.

Christina Hammer (26-1) knocked out Sanna Turunen (6-4-1) in the seventh round on Sunday Dec. 20. The super middleweight title fight took place at Cologne.

Zhansaya Rakhymberdi (2-0) defeated Zhaina Zhabykbay (0-1) by decision after six rounds on Friday Dec. 18. The flyweight bout was held at Almaty.

Mea Motu (4-0) knocked out Katala Hansen (0-1) in the first round on Saturday Dec. 19. The lightweight fight took place in Auckland.

Laura Grzyb (5-0) pound out a 10 round unanimous decision over Enerolisa De Leon (6-4-2) on Friday Dec. 18. The featherweight fight took place at Pionki.

Vanessa Caballero (4-9-3) defeated Vanesa Caruso (0-6) by decision after six rounds on Saturday Dec. 19. The featherweight fight was held in Galicia.

Gabriela Timar (4-0) won by technical knockout over Dariel Simova (0-1) in the fourth round on Saturday Dec. 19. The super flyweight match was held at Basel.

Melissa Oddessa (3-0) knocked out Brittany Sims (1-1) in the first round on Saturday Dec. 19. The NABF super bantamweight title fight was held at Greenville, South Carolina.

Hyun Mi Choi (18-0-1) won by unanimous decision after 10 rounds against Colombia’s Calista Silgado (19-12-3) on Friday Dec. 18. The WBA super featherweight world title fight took place at Hollywood, Florida. Silgado was not eligible to win the title due to being overweight. It was Choi’s first American appearance.