Layla McCarter, Naoko Fujioka and Others Testing the Younger Fighters
Written by: David A. Avila 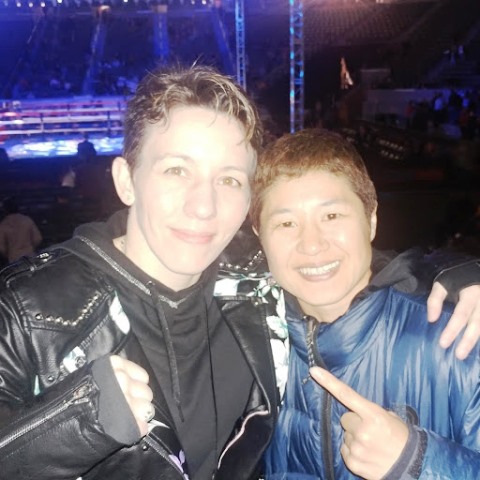 Many of the best fighters in the world are into their 40s.

If you take a look around the world from Japan to Argentina from contenders to world champions a long list of fighters exist that are more than capable of beating anyone in the world and not just their weight class but others as well.

But time is not their friend, especially today with the entire world on lock down.

Here is a list of fighters 40 year-olds that need to fight soon before their reflexes no longer prove capable of slipping a punch from a 20-year-old’s lightning combination. They need to fight before their sizeable fighting skills and knowledge are no longer enough to offset the speed and power of young guns rising through the ranks.

More than a few on this list currently hold world titles and several on this list have formerly held titles in multiple weight divisions. They come from around the world and if time allows it would be a gift to all who love and follow female prizefighting to see them in action and very soon.

Here are the best of the 40-year-old guards:

Layla McCarter, 41, – the veteran from Las Vegas has ached for a shot at any of the top welterweights or lightweights for the past four years. From featherweight to super welterweight, Layla has defeated world champions and contenders. Despite her small frame she is considered the most skilled and experienced female fighter in the world by those who know the fight game. Lately, she has set her sights on either Claressa Shields or Katie Taylor and doesn’t care about weight or height disparities. Layla has not lost a fight since April 2007 and she avenged that loss twice over. No other fighter in the world can claim to be undefeated in that same time frame. She only wants to fight the best before she hangs up her gloves. And of course she wants to get paid.

Mariana Juarez, 40,- the pride of Mexico has long been that country’s most popular fighter for many years. “La Barby” Juarez has packed arenas, set world attendance records and held the bantamweight world title for three years. She is also an extremely intelligent prizefighter who knows how to diffuse an all-out attack, use her jab to perfection and is a master of distance. She has won world titles as a flyweight and super flyweight and plans to fight fellow Mexican Jackie Nava when all of this is over. The fight between Mexico City’s Juarez and Tijuana’s Nava should have taken place but it just didn’t work out – twice.

Naoko Fujioka, 44, – the fighter voted Japan’s best female prizefighter of all time has yearned to prove herself in the USA. She has captured world titles in five weight divisions and has a natural fighting ability that enabled her to defeat several Mexican fighters. That’s no easy feat. She currently holds the WBA flyweight world title and eagerly awaits an opportunity to defend it against America’s best. She knows time is not on her side and wants to show why many still consider her one of the top pound for pound fighters in the world. She has a win over Mariana Juarez and defeated Yokasta Valle who currently holds a world title. Her most recent fight ended in a draw with the dangerous Tsunami Tenkai. The fierce Fujioka is never in a boring fight and often travels to the USA to train. Japanese fighters are fierce.

Marcela Acuna, 43, – the pride of Argentine has a combination of skill and athleticism that has kept her as a world champion. But she knows her time is limited and has been willing to venture outside of her native country to battle with the best in the world on their home turf. Acuna wowed audiences in Puerto Vallarta, Mexico when she battled Tijuana’s Jackie Nava to a draw. Many felt the Argentine fighter should have been declared the victor. But the super bantamweight world champion proved her mettle against many of the best in the world and wants an opportunity to show it again. And she doesn’t care if she has to travel to prove it.

Jackie Nava, 40, – known as the “Aztec Princess” the veteran from Tijuana, Mexico has long been considered one of her country’s best female fighters. Attempts to fight rival Mariana “Barby” Juarez just don’t seem to be in the cards. Every time it looks like they are finally going to collide the rug gets pulled from under them. Maybe it’s not meant to be. Nava has been in many brutal wars during her career including two epic battles with Ana Maria Torres that are considered classics. Nava has mentioned this is her final year. It has been a great career and she still has some gas in the tank.

Melissa Hernandez, 40, – After a brief retirement the Bronx, New York fighter returned to the wars and showed that wins and losses don’t mean a thing if you ain’t got that zing. Despite being the last person to defeat the talented Layla McCarter, the former multi-division champion Hernandez has shown that age hasn’t slowed her down a minute. Her win over the talented Selina Barrios proved that a year ago. She was scheduled to fight Mikaela Mayer but that was canceled. No new date has been set. Hernandez is a handful for anyone and knows how to put on a show too. How many fighters fit that description? She is fun to watch.